Subscribe
Data connectivity for EFBs Part 1In part 1 Bill Vlases, Manager EFB Solutions at Boeing considers what connectivity is, when it’s needed and why.

Connectivity is one of the hot topics in our industry right now. As an application developer for Electronic Flight Bag (EFB), I speak with a lot of airlines. In those conversations, I hear a lot of uncertainty about connectivity and get a lot of questions, most of which fall into one of five categories:

These questions are often based around what the needs are and how they can be implemented. In this two-part article, I will cover some examples of specific uses of connectivity for EFBs. We’ll briefly address airlines’ struggles with implementing connectivity into their EFB programs; we’ll consider different types of connectivity; the actual data needs from a use case perspective; and we’ll look at the potential benefits, including efficiency improvements and cost savings.

CONNECTIVITY: DO WE NEED IT?

At a high level, most people have a pretty good idea of what connectivity is. We’re used to, and now largely dependent on, connectivity in our personal life. Readers carry tablets and smartphones, and are always, as we say, ‘connected’. Also, people are increasingly going online for all kinds of information around the clock, at work and at home. But, do we need and should we expect ever-present connectivity in airline operations? Stated differently, do we expect pilots, while on the flight deck, to have the same degree of connectivity that we expect in other areas of our lives? Traditionally, the answer has been ‘no’. This answer was largely driven by the fact that we haven’t made the same advances in connectivity on the flight deck as we have in the passenger cabin. However, as that’s changing, the expectation among pilots is also changing.

When we at Boeing say ‘connect the airplane’, we really mean to make it another node on a network. To have access to and share data from the airplane with the crew, the ground, and in the near future, other aircraft and vice versa. The second part of that is enhancing the ground systems. By this we mean sharing data, integrating with back office systems, and tying the aircraft into the corporate information technology infrastructure. The third part is optimizing the operation meaning, once connectivity is established, taking the information and doing smart things with it.

TYPES OF CONNECTIVITY
Beneath that higher level definition, we can identify three types of connectivity. The first is ground connectivity between EFBs and back-office systems for data sources (including database updates), weather data, flight plans and log book histories.  This linkage is pretty well established for tablets, but not so well for some installed EFBs.  Many installed EFBs do not have good connectivity with back-office systems. On the ground that connectivity is easy for tablets but, even then, commercial off the shelf (COTS) Wi-Fi requires airport wireless which doesn’t exist in all places. Or cellular which is available nearly everywhere but can be expensive when roaming. However, installed EFBs, require terminal area wireless LAN unit (TWLU) or a cellular link, often as an additional line replaceable unit (LRU) at considerable expense.

The third type of connectivity is off-board connectivity in-flight. That is probably the least well developed for most operators. Airplane systems typically include Aircraft Communications, Addressing and Reporting System (ACARS). Increasing numbers of aircraft are equipped with off-board connectivity for passenger use, including air-to-ground and satcomm systems. However, regulatory issues limit the use of such systems by pilots. Separate communication systems such as TWLU, aircraft wireless LAN unit (AWLU) or IP satcomm for pilot use add weight and are expensive. However, they are becoming more common on production airplane deliveries. Integration between EFBs and communication systems is required to utilize these services.

DO I NEED EFB CONNECTIVITY?
EFB connectivity today is, to a large extent, limited to ground use. Of course, that isn’t entirely true; EFB Class 3 has been installed on Boeing airplanes for 12 years. It has connectivity to the airplane data for all operators and off-board connectivity while in-flight for a few operators. The installed fleet is largely confined to wide body Boeing airplanes making for limited penetration in the airline market. But there are issues around connectivity to the Class 3: many operators did not select off-board communications, making data updates difficult and time consuming. Plus, adding off-board communications in retrofit is expensive and requires ground infrastructure not always under the airline’s control.

Tablets, on the other hand, have an advantage. Nearly all have native ‘off-board’ connectivity (either through 802.11 wireless networks or cellular networks) that allows a pilot to access ground-based services prior to takeoff. Cellular networks exist worldwide. That connectivity is a big part of why they’ve been popular, and the pilot community has been at the forefront of tablet adoption. So for a typical operation using portable EFBs, many of the flight tasks can be done using existing methods, either paper-based or digital. Tablets haven’t for the most part been connected to the airplane.

To start to answer the questions ‘do we need it?’ and ‘what are the benefits?’ let’s look at connectivity in the context of a pilot’s activities  today. 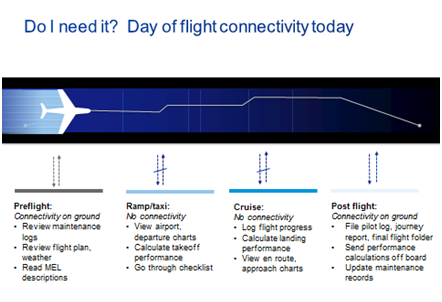 Do I need connectivity pre-flight?
Pre-flight tasks include reviewing maintenance logs, flight plans and weather information. Access to minimum equipment lists (MELs) is also necessary.  As these documents are self-contained on an EFB, there’s no requirement for additional connectivity. All of the above can be done on the ground with existing systems.

Do I need connectivity on the ramp or while taxiing?
Once the aircraft has pulled away from the ramp, and during taxiing, most airlines don’t use tablet connectivity due to regulations or equipment restrictions. However, there are still a number of things that can be done with EFBs. Charts can be viewed on a tablet device; it’s still possible to complete take-off performance calculations; and review the checklist if there’s a checklist app on the forward display or the EFB.

Do I need connectivity while in the cruise?
Typical activities during cruise include logging flight progress against plan, the need to calculate landing performance and to view approach charts while en-route. These can all be achieved on the EFB (installed or tablet-based) without being connected.

Do I need connectivity post-flight?
Connectivity resumes once back on the ground. Pilots can file reports – such as the pilot’s log, the journey log and the final flight folder – in either paper or electronic format. It is also possible to send performance calculations off-board and update maintenance records.

WHAT DO PILOTS NEED THAT IS CURRENTLY UNMET?
We hear three main concerns. First, lack of integration between applications, requiring that the same information (route, arrival destination, etc.) be entered multiple times. Second is the inability to get airplane data into applications. Finally, as the pilot is disconnected during flight, he or she is working with information, such as weather data, which may be outdated. A briefing package delivered at the beginning of a flight can, especially during a long-haul route, have become pretty stale.

In the next issue we’ll look at how to get connectivity, what benefits it will deliver and the business case for it. 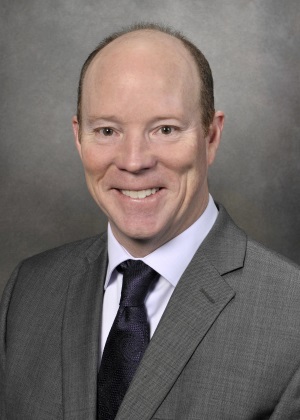 William (Bill) Vlases
Bill Vlases is a manager in the Electronic Flight Bag (EFB) Solutions team within Commercial Aviation Services’ Digital Aviation organization, where he oversees application development and support. He began his Boeing career in 1989 after receiving a master’s degree in aerospace engineering, starting as an astrodynamics engineer then leading a team testing navigation system software before going to work for a software company in Seattle. Bill rejoined Boeing in 2004 and in 2006 was an EFB Deployment Manager, helping airlines’ e-enabled strategies.

Boeing Support and Services
Boeing provides world-class support to customers around the clock and around the globe. This support starts when a customer places an order and extends throughout the lifecycle of the airplane. The goal is to maximize the value of airplane fleets and operations, giving Boeing customers a competitive advantage in a challenging business. Commercial Aviation Services offers the industry’s most comprehensive portfolio of products, services and support, marketed as Boeing Support and Services