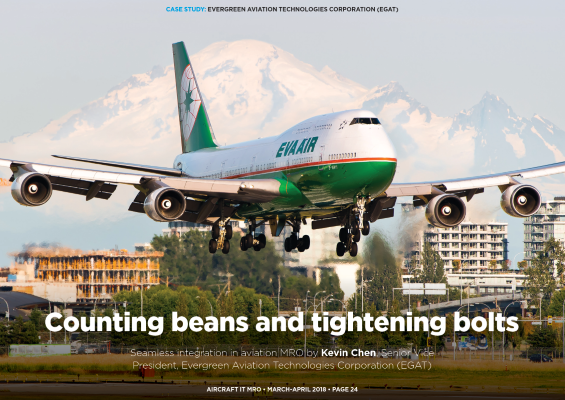 I write as a ‘bean counter’ but the reality is that counting is now a very important part of any business and especially our MRO business. In MRO, competition is increasing all the time which means that everybody in the sector will always try to squeeze a profit out of each event. In that environment; every cent matters, so counting beans should be normal practice. But before we look into EGAT’s ‘bean counting’ exercise, I should tell you something about the business; where it comes from, what it does and the principles by which it stands.

Introduction to EGAT
Evergreen Aviation Technologies Corporation (EGAT) is part of the global Evergreen business which is involved in a number of transport activities including shipping with Evergreen Marine. So we’re part of a global shipping enterprise. Evergreen was founded in 1968 and is now the world’s number five in the container shipping industry. EGAT is also a subsidiary of EVA Air in Taiwan, which was founded 1989, began operations in 1991 and is now, according to Skytrax, a 5 Star airline. Also, as announced at the 2017 Paris Air show, EVA Air is number six among the top 10 airlines. So, Evergreen is a big transportation enterprise in Taiwan with trucks, ships and aircraft.

In 2015, EVA Air ranked in the top three airlines for safety and, of course, in that respect, maintenance work is an important component. EGAT has also received its fair share of plaudits including, in 2015, the UPS Outstanding Business Partner Award, in 2013 Asiana Airlines’ best MRO, in 2011 the Quality Award from Atlas Air and, also in 2011, EGAT was rated Best Independent MRO by the UK’s ATE&M. As far back as 2009, Aviation Week rated EGAT the Best Independent MRO. In EGAT our slogan is ‘Make it happen’. 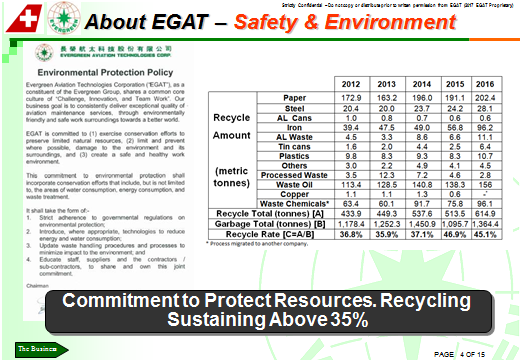 For EGAT, environmental protection is an important element in our policy. As far as recycling is concerned, Austria is best in the world with a 63% recycling rate followed by Germany at 62% but third in the world is EGAT’s home country, Taiwan, with a recycling rate of 60%. In EGAT, our recycle rate in 2016 was about 45% and our target is to remain above 35% (figure 1). As well as environmental responsibility, Evergreen aims to be a socially responsible business and there is the Evergreen Foundation, a charity which often donates large sums to help victims of natural disasters.

Returning to EGAT, fleet service capacity includes heavy maintenance and modifications for which we have some 1,750 technicians, as well as about 350 technicians in ramp and line maintenance activities. Further to that, we undertake component repairs which activity accounts for a further 120 technicians; and there are 250 technicians in our engine overhaul and quick turns operation. In addition to the maintenance work, we also have around 200 people delivering a parts’ logistics service.

EGAT works to a culture of Challenge, Innovation and Teamwork and to deliver exceptional business value with tier 1 partners such as Boeing and GE (figure 2). We have handled more than two thousand aircraft heavy maintenance visits and modifications since 1998 along with another two thousand engine overhauls. The focus is on increasing aircraft down-time efficiencies. And in heavy maintenance and engine overhauls is included value added services as well as aircraft / engine upgrades during regular down-times. Besides the maintenance, we offer a number of other services, such as conversions and AOG support. 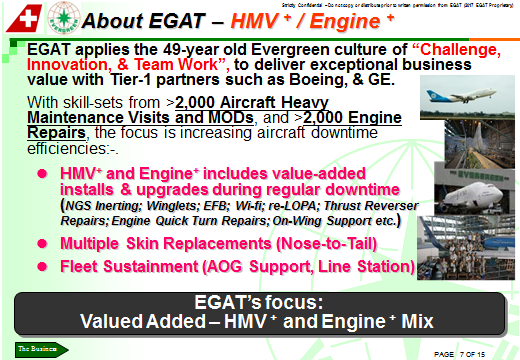 In Taiwan, we have four high security US TSA-audited hangars at our Taoyuan Airport base where we can support nine wide-body and three narrow-body aircraft. But EGAT also supports clients around the world in the USA, Europe, the Middle East and Asia.

Why Swiss-AS?
The decision to renew and upgrade our MRO software solution was really a matter of corporate survival as our legacy system (more than 25 years old) lacked the process requirements that we need today: in short, it was time to move on to a new system. Also cost management demands effective process managers. MRO is a labour intensive activity, so wage escalation and overhead costs lead to an increasing focus on chargeable activities. With this system renewal we wanted to control unproductive activity and escalating costs. The revenue comes from all the jobs that we do but we need to consider how the profit will be generated from those activities. 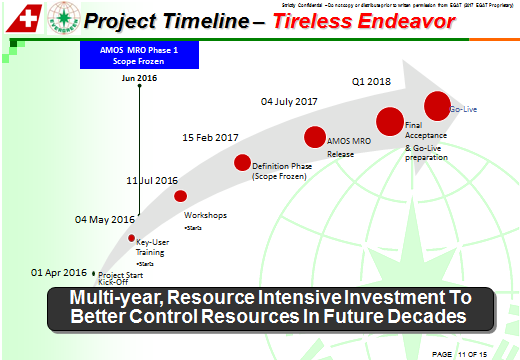 In 2015, EGAT undertook an evaluation exercise between four competing systems which finally resulted in us selecting AMOS. We started to kick-off the project with Swiss-AS in April 2016 (figure 3) and were still, at the time of writing, undertaking the implementation of the new system which will be ready to launch in 2018. A key reason why we selected AMOS from Swiss-AS is that it is a modular product offering needs-based flexibility through different editions for CAMO, airlines, airline MRO, as well as an independent MRO edition which suits a business such as EGAT. For legacy airlines, low cost carriers, airline based MRO shops and independent MRO shops there are different processes with different requirements and the modules reflect this (figure 4). 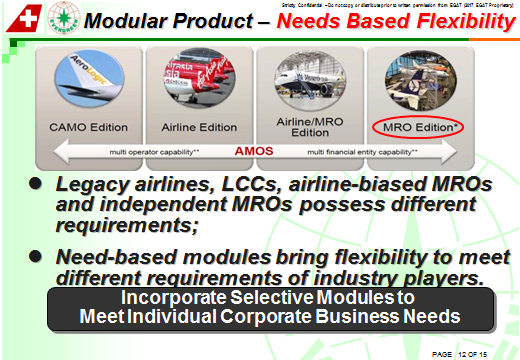 AMOS’s needs-based modules offer flexibility to meet the different requirements of different industry players such as EGAT and to be able to fulfill individual corporate needs.

From the modular product, MRO Edition, EGAT has selected several functions, the first of which is Customer Relationship Management (CRM), followed by Sale of Services Quotation and Contract Management, Facility and Hangar Planning, as well as Ground Time Control. We have incorporated a Production Control Dashboard graphic user interface, along with the Finance Dashboard user interface that includes a Financial Project Analyses functionality. Finally, we have incorporated a Material Allocations function as well. The MRO Edition, with its functions, and user interfaces enables the MRO to manage multiple customers with multiple financial entities concurrently,

A key benefit of AMOS’ MRO Edition is in the ease of process management; the module facilitates supply chain inter-connectivity from Engineering to the Airline to the MRO. Also of benefit is the Finance Function that features billing, general ledger and invoice checking functions. EGAT further appreciates the Program Management and control features, with event-based financial highlights. Finally, customized depreciation, quotation to billing and component repair procedure functions are all under development. From a financial perspective, MRO Edition facilitates a sharper focus on operations and operational costs. The aircraft is inducted when we execute a contract with the airline to undertake, say, the heavy maintenance work on one aircraft. The MRO module supports the entire lifecycle of the maintenance event, from contract signing to aircraft induction, from maintenance planning to aircraft redelivery, and finally from contractual invoice payment to warranty management. Through this process, the system can provide us with timely and relevant information, from the beginning to the end of the transaction and process.

In summary, the MRO Edition module delivers ease of managing stakeholders’ expectations and the information that we need to profitably manage processes for multiple clients. 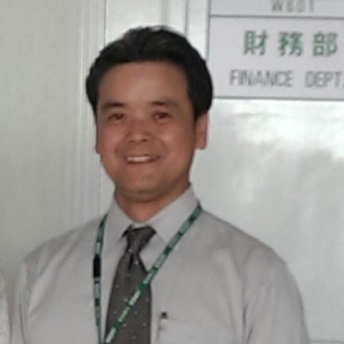 Kevin is Senior Vice President at Evergreen Aviation Technologies Corporation (or EGAT) with oversight and management of corporate finance activities. He started his career in accounting functions at EVA Air (or EVA) in 1991 and took on management of EVA’s accounting functions in Europe, based out of Amsterdam from 1997-2000. Between 2005 and 2008, Kevin was assigned to manage the finances at EVA’s joint venture airline Shanghai Cargo. Besides accounting, Kevin’s responsibilities at EGAT include financial planning, risk management, and business planning.

Evergreen Aviation Technologies (EGAT) is a best-in-class specialty aircraft Maintenance, Repair, Overhaul (MRO) center for all aviation needs. Winner of the 2011 Best | Airframe MRO in Asia (UBM Aviation), and the 2009 Best Independent MRO in Asia-Pacific by Aviation Week, EGAT offers nose-to-tail AOG support within a full MRO service from skin replacements to winglet installs, and from engine overhauls to interior retrofits. EGAT is also proud of its environmental record and achievements.