Column: Autonomics and the Network of Everything (NoE)

Autonomics and the Network of Everything (NoE) 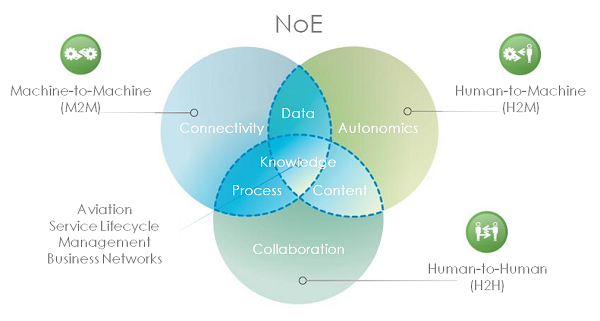 “It’s Official: The Internet Of Things Takes Over As The Most Hyped Technology,” wrote Gil Press on Forbes.com[i] announcing Gartner’s annual Hype Cycle report on Emerging Technologies.[ii] So what is “The Internet of Things” (IoT) and what does it have to do with aviation MRO?

IoT isn’t about the Internet nor about Things, rather, it’s about machines connected across networks of autonomous agents automatically processing events, without human intervention, to create value by adaptively analyzing big data to diagnose and prognosticate granular knowledge in order to provide value to human consumers of one.

Like many innovations, the capabilities of IoT originated in military research and development. Network Centric Warfare and Network Centric Operations (NCO) were strategic capabilities undertaken by the US DOD, UK MoD and NATO in parallel with Sweden’s Network Based Defense (NBD). NCO and NBD leverage previous capability developments commonplace in A&D (Aerospace and Defense) such as Reliability Centered Maintenance, Condition Based Maintenance, and the Machinery Information Management Open Systems Alliance (MIMOSA).

Central to NCO/NBD methods and capabilities is the concept of sense and respond.  Sense and respond logistics (S&RL) is commonly equated with autonomic logistics; but in fact S&RL only includes the non-adaptive mechanics of Machine-to-Machine (M2M) and Machine-to-Human (M2H) transactions. The Network of Everything (NoE) adds to S&RL and IoT, Human-to-Human (H2H) interactions, collaboration, knowledge formation and complex decision making.

Diagnostics, prognostics, health management are common terms in both medicine and aviation service lifecycle management. Another common term adapted from biology is autonomic. The autonomic nervous system is the involuntary, autonomous and automatic control system for visceral organs functioning below the level of consciousness.[iii]  The characteristics of an autonomic system are automatic, autonomous and adaptive. Hmm, sounds a bit like what those technology geeks were describing for the Internet of Things.

Lockheed Martin Aeronautics developed the Autonomic Logistics Information System (ALIS) for performance based service lifecycle management of the F-35 Lightening II Joint Strike Fighter.[iv] New generation commercial aircraft create up to 1 terabyte of data per flight from the plethora of sensors on board.  That data is being processed in flight and post flight, combined with human actions and content, and then analyzed to prognosticate who should do what, where and when in order to optimize asset utilization, labor productivity and supply effectiveness. Networked autonomics are alive and well in aviation. But these initial capabilities have been stove piped along OEM specific closed proprietary networks.

The last elements of an open modern set of data and content standards are being put in place by the Aerospace and Defence Industries Association of Europe (ASD) via the SX000i specifications. The open autonomic MRO Network of Everything is about to become a reality. At least that’s how I see IT.

Prior to Flatirons Solutions, Denis held diverse leadership functions including corporate strategy, market analysis, scenario planning, mergers and acquisitions, IT, performance metrics, and process reengineering for several aviation consultancies and a Fortune 100 company. He is an established thought leader in the area of aircraft lifecycle sustainment and has published multiple articles on aligning business strategy to operations execution through the use of information technologies.

Denis holds a bachelor’s in Nuclear Engineering from the Georgia Institute of Technology and a master’s in Decision Science from the J. Mack Robinson College of Business at Georgia University.