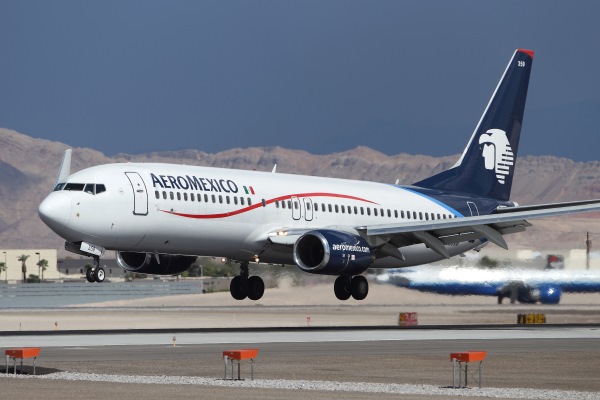 Fuel efficiency: desirable and achievable
Fuel efficiency will always be important for airlines because fuel represents their single largest non-capital and most volatile cost. In light of this, a growing number of airlines are investigating or implementing fuel efficiency programs. Aeromexico and Boeing are working collaboratively on a fuel efficiency strategy to improve the airline’s operational performance.

In 2010, fuel accounted for 26% of the operating costs of U.S. major carriers. By 2014 that had risen to 34%. For airlines around the world, the equivalent figures in 2013 ranged from 25% to 45% and global data suggests this trend will continue into the future. Oil prices over the past 10 years have risen three-fold, but have also been volatile, adding significant risk to airline operating cost.

Although the price of oil has dropped abruptly and considerably in the past year, airlines are planning for prices to resume their upward trend soon. Even if fuel costs were to remain stable, fuel efficiency is something that airlines need to relentlessly pursue to remain profitable. In addition to the cost pressure, airlines and operators also face growing pressure to reduce their environmental impact, in part by reducing fuel burn and associated emissions.

Fortunately, there are many opportunities to improve fuel efficiency across airline operations. These range from the strategic (e.g. new aircraft design), to adjustments that can be implemented more readily, such as changes to operating policies and procedures. Original equipment manufacturers (OEMs), such as Boeing, have a strong commitment to helping their customers reduce fuel consumption and its resulting environmental impact.

Aeromexico
Aeromexico is the largest carrier in Mexico, and has been in operation for more than 80 years. Its main hub is located at Mexico City with a secondary hub at Monterrey. Operationally, the airline really comprises of two discrete airlines: Aeromexico, which operates a fleet of Boeing 737s, 777s and 787s; and AM Connect, which operates Embraer E145, E170, E175 and E190 aircraft. The two serve 80 destinations in 20 countries across North America, South America, Asia and Europe. Having achieved 19 consecutive profitable quarters to date, the group carried more than 17 million passengers in 2014, representing an 11% year-on-year growth. Aeromexico also plans to increase available seat kilometers (ASK) by 10% in 2015.

A fuel management program
Aeromexico has always been committed to reducing fuel use and has developed specific fuel efficiency and environmental strategies throughout the past decades. This is significant because the success of any fuel efficiency program is inextricably linked to long-term commitment. To reach its full and consistent effectiveness, any program must be firmly embedded in corporate culture, with the entire company fully engaged. Teamwork is another important factor in success because fuel efficiency involves many parts of the business, including flight planning, technical operations and flight operations. Therefore, it is important to have a good internal communications program to go along with fuel efficiency measures, to ensure the entire team is aligned with the plan. Last but far from least, there has to be a partnership with the equipment manufacturer. This case study will focus on Aeromexico’s partnership with Boeing, which has achieved credible results in the carrier’s fuel efficiency program.

A number of discrete initiatives have been undertaken as part of Aeromexico’s fuel efficiency program: Split Scimitar Winglets have been installed on its new 737-800s; taxiing is done using a single engine whenever possible; fuel is tankered when warranted; and pilots have been trained to understand the economic consequences of ordering extra fuel. 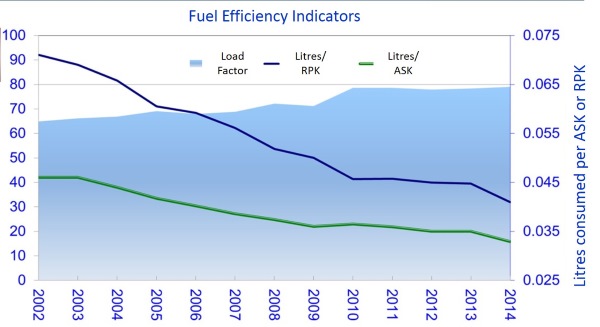 The graph shows how Aeromexico’s final operating condition load factor has grown over 12 years and how liters per revenue passenger kilometers (RPK) and per ASK have declined over the same period. Aeromexico has achieved these results through the types of initiatives outlined above, as well as by updating its fleet with newer, ever more efficient airplanes. Today, Aeromexico’s average fleet age is about nine years. Again, fuel efficiency programs are not based on any one thing but, rather, are the result of multiple focused initiatives. 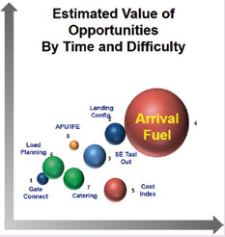 The graphic representation above shows the project team’s estimation of the value of eight opportunities by time (vertical scale), difficulty (horizontal scale) and size. Most of the small and medium sized opportunities were typical initiatives. It was soon clear that the single largest identifiable opportunity was arrival fuel. This, however, is also the most difficult and time consuming area in which to implement change.

What is arrival fuel?
One of the best ways to save money in an operation is to reduce extra fuel being carried. This, in turn, reduces aircraft weight. The 2013 assessment showed that Aeromexico’s airplanes carried an average of about 4,200 kg per flight, sufficient for about an hour and 45 minutes of flying time – this is more than the minimum regulatory requirement. Aeromexico’s flight operations team believed that reducing contingency fuel to 60 minutes of flying time was an achievable goal.

It is also useful to understand why arrival fuel was high. First of all, the 1 hour, 45 minutes’ worth of arrival fuel that Aeromexico flights typically carried is not that unusual within the industry. Industry data, as well as assessments conducted by Boeing at a wide range of airlines show that arrival fuel varies anywhere from an hour and 15 minutes worth to as much as two and a half hours’ worth or more.

So why do airlines carry so much extra fuel over the regulatory minimums? Boeing analysis shows that an inaccurate baseline of fuel consumption and requirements is compounded by inaccurate flight planning. When crews encounter a great deal of variance in fuel burn between the flight plan and actual performance then, as a reaction, they add more fuel. However, the extra weight from the extra fuel produces yet greater consumption variances and, which in turn creates a vicious circle of ever-greater quantities of arrival fuel.

The arrival fuel program at Aeromexico
The arrival fuel program at Aeromexico began with a focus on good weather operations; in bad weather, additional fuel is required to account for unexpected delays and a greater potential for diversions. Fair-weather operations created a better platform to develop a new statistical arrival fuel policy for calculating the minimum correct amount of fuel to load. This new amount would be considerably lower than what was previously used. In order to calculate take-off fuel in a way that would enhance operational reliability significantly, a policy was put in place to make use of alternate landing sites along the route. Instead of holding at destination and diverting when aircraft run low on fuel, pilots are encouraged to make technical stops enroute, if it appears likely that there is an issue with proceeding to destination. Operational reliability is enhanced because recovery from a technical stop is much quicker than recovery from a diversion. Fuel can be reduced, because the destination alternate is almost never used.

A statistical review of more than 137,000 flights was conducted as part of the implementation. As a result, 30 of 44 destination alternates were changed to close paper alternates. Also, new enroute operational alternates were selected for 102 routes, in order to implement the new enroute technical stop policy. As part of this process, Aeromexico developed new standard operating procedures (SOPs), which were approved by the Mexican regulatory authority, the Direccion General de Aeronautica Civil. In addition, support from both pilots and dispatchers was critical.

The team used a number of techniques to train and inform the pilots and dispatchers including bulletins, videos, posters, chats, special Facebook pages, as well as more traditional training such as jump seat rides, which allowed other staff to see new ideas in action. In the end, it all paid off when, in the words of its own management pilots, Aeromexico achieved, “A major cultural change in… Flight Operations in less than a year!”

The results
The following chart illustrates the arrival fuel program over the year from commencement, through go-live, to additional refinements made through the first year of the program.

Aeromexico has managed to reduce average additional arrival fuel from about 4,200 kg in 2013-14 to 2014-15 figures at below 4,000 kg. Since February 2015, the figure has fallen to the initial target of 3,000 kg. From these results, the project team is confident that Aeromexico will reach the final goal of bringing additional arrival fuel down to 2,400 kg. Put into financial values, an average reduction of 1,000 kg in arrival fuel for the 737 fleet would translate to a 1.5% reduction in consumption rate, a $7 million U.S. per year savings. In fact, on some routes, the reduction has been as much as 1,400kg. That $7 million U.S. savings is at $1.08 U.S. per gallon. When fuel prices inevitably rise again, savings will rise with them. In the airline industry, where profit margins are so slender, these savings are a significant addition to the bottom line.

Looking forward to the longer term plan
Looking forward, Aeromexico has additional fuel efficiency plans, targeting savings in 2015 of 1.3% or approximately 20 million liters across all fleets. This is realistic in light of the actual achievement of 1.05% reduction against the current target of 1%.

Aeromexico plans to extend its arrival fuel reduction program to its Embraer fleet, and will also be working with Boeing on a trial of Wind Updates trial for its 777 fleet.  Using Wind Updates, pilots are able to use real time wind information to make better routing and altitude decisions. There is also a program to implement single engine taxi-procedures with the wide-body fleet. Finally, Aeromexico is in the process of implementing the Boeing Fuel Dashboard, which will help the airline analyze operational fuel use information to improve decision making.

The suite can be supplied as software or as part of a consulting package.

Fuel efficiency is a critical element in successful airline operations. The Aeromexico fuel efficiency project shows that such programs can be neither piecemeal nor short-term. To be effective, they must have the full support of multiple stakeholder groups and be rooted in company culture. Done properly, fuel efficiency will strengthen any airline’s bottom line.

Fuel efficiency is, today, the goal of every airline and operator but, to work well, it has to be a proper program of worthwhile initiatives as this Aeromexico case study shows. 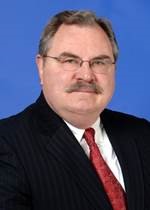 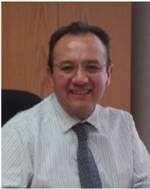 Rafael Suarez joined Aeromexico in 1995 as Operations Engineer. In 1999 he started to work with the Airport Customer Services Team. He has also been a pilot ground instructor and in 2003 became Operations Director for Mexico City Airport in SEAT (now AM Servicios), the biggest ground handling company within Mexico. He has been involved in various projects related to fuel saving, synergies, cost reduction and recently in the iPad project achieving paperless cockpits.

Aeroméxico
Aeromexico (with AM Connect) is the largest carrier in Mexico with a main hub in Mexico City. The two airlines in the business operate more than 120 aircraft with an average age of nine years including Boeing 737, 777 and 787 plus an Embraer fleet. The airlines serve more than 80 destinations in 20 countries across three continents and carried more than 17 million passengers in 2014

Boeing
Boeing is the world’s largest aerospace company and leading manufacturer of commercial jetliners. It also has the industry’s largest portfolio of services for airlines. Using the massive data sets generated by airplanes and operators, Boeing is able to share experiences so that airlines can learn and improve their operations faster. It is also able to bring technical expertise to airline programs such as fuel efficiency and use the information gained to further improve the design and efficiency of its airplanes.