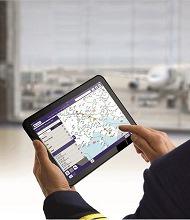 “We were convinced by the comprehensive functionality of the Lido/mPilot navigation app, and by its reliability,” said Captain Gorazd Cerne, Training Manager at Sky Angkor Airlines. “By selecting Lufthansa Systems, we have opted for a new IT solution providing us the content and function we need by a reasonable price. We look forward to developing our successful partnership together with Lufthansa Systems.”


Lido/mPilot is a mobile navigation solution which supports pilots before, during and after a flight. Around 60 airlines have already decided to deploy Lido/mPilot since the app was launched in early 2015. The modular app offers features such as airport maps, a dynamically generated enroute chart, and a document management and distribution system that enables pilots to access documents and messages both at home and on the move.

Layout, colors and symbols are identical in the charts´ paper and electronic versions. They comprise navigation charts for take-off and landing procedures as well as airport and route charts including all important route information like altitude and airport data. These charts are generated directly from the Lido navigation database, which includes worldwide aeronautical information and topographical data.

“We are delighted to have Sky Angkor Airlines as a new customer in the Asia/Pacific region. This agreement also highlights the growing importance of digitization in the airline industry,” said Tom Vandendael, Senior Vice President Regional Management Asia/Pacific.

Sky Angkor Airlines is a regional Asian carrier based at Siem Reap International Airport in Cambodia. Established in 2011, the airline has a fleet of five aircraft serving destinations in several countries including Japan, China, Korea and Vietnam.

Picture description (copyright Lufthansa Systems): The Lido/mPilot iPad app supports pilots before, during and after a flight.