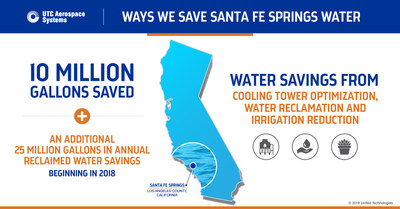 CHARLOTTE, N.C., March 20, 2018 /PRNewswire/ — With a continued focus on reducing water consumption, UTC Aerospace Systems, a unit of United Technologies Corp. (NYSE: UTX), today held a ribbon-cutting for its first U.S.-based water reclamation initiative at its manufacturing facility in Santa Fe Springs, California. The project will increase water savings by 25 million gallons at the site, adding substantially to the 9.7 million gallons of water saved on the premises since 2013.

UTC Aerospace Systems has been working with the state of California and the local municipal water district for nearly three years in the planning, design and construction of the initiative. The water reclamation project will flow site-generated industrial waste water to a city treatment facility, which will return the treated water to the Santa Fe Springs facility for industrial use. The water will be distributed through a separate connection with no impact to sanitary or drinking water at the location or in the surrounding community.

Since 1997, United Technologies Corp. has tripled the size of its business while reducing water consumption by 62%. By 2020, UTC is committed to reducing water usage by 25% compared to our 2015 baseline.  As a longstanding local business, UTC Aerospace Systems has been committed to helping reduce the burden of drinking water usage in California, while also maintaining a pathway to continue business growth in the community.

Since 2013, the seven California-based UTC Aerospace facilities have reduced water usage by 65 million gallons through high-profile initiatives, including water recycling, xeriscaping, and low flow fixtures, while eliminating leaks and overflow. These actions have contributed to the 313 million gallons of water saved across UTC Aerospace Systems locations since 2013.

“By moving to reclaimed water, we will now be using the same system that many local municipalities use for public irrigation and landscaping,” said Diego Torres, Director of Operations at UTC Aerospace Systems. “As a large industrial consumer, it’s great to know we are now able to preserve 25 million gallons of water for the region’s drinking water supply each year.”