The world according to IT & me…

iPad as an EFB: great functionality but what about the battery? 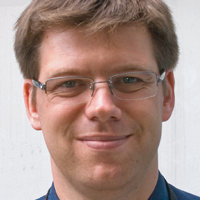 With a publication such as AircraftIT readers seek knowledge: to know what is going on and share real experiences that can inform their own activities. They want access to the latest thinking in the sector and they want to read thoughts that fall ‘outside of the box’. To help readers in that objective and to add yet more value to your read, we are very pleased to welcome to AircraftIT Paul Saunders and his considerable experience of IT. Paul’s opinions will be personal (what other kinds are there?) and you might agree or disagree with him but we know that his pithy and informed comments will make you think. Welcome to the first of Paul’s regular columns, ‘The World according to IT & Me!’

The scene was the recent Airline and Aerospace MRO and Operations IT Conference in Miami, where I had been invited to chair a panel discussion. Our subject, ‘the use of iPads on the flight deck’, was addressed to a panel including delegates from UPS, Alaska Airlines, US Airways and from the FAA.

After a couple of warm up questions we moved on to questions from the floor. Here, the FAA guys were made to work very hard with all kinds of inputs seeking clarification on the standards and requirements for using iPads as an approved electronic flight bag (EFB). It rapidly became apparent that one hour was not nearly enough time to cover everybody’s questions and, after the session had finished, the stage area was swamped with eager delegates seeking guidance for their own issues. This rolled out into the lobby and later into the dining area. 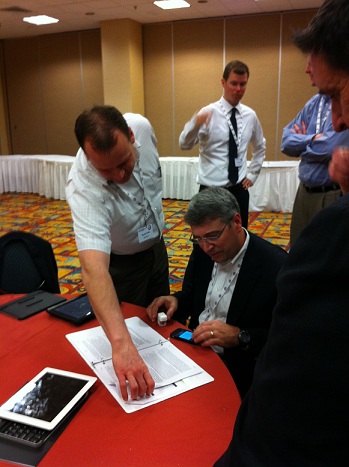 It was some time in the mid-afternoon that I found the guys from the FAA still holding court with a large group of delegates all focussed on a new draft of Advisory Circular 120-76B which provides guidelines for the Certification, Airworthiness and Operational Use of electronic flight bags. There was particular heavy scrutiny being paid to a seemingly small amendment to the chapter on the Safety and Testing Standards for the use of Lithium-ion batteries. Some concerns as to the safety of batteries used in the iPad had led the regulators to make a minor rewording, an amendment to the testing standards. This gave rise to the big question: ‘did the iPad’s battery comply?’ 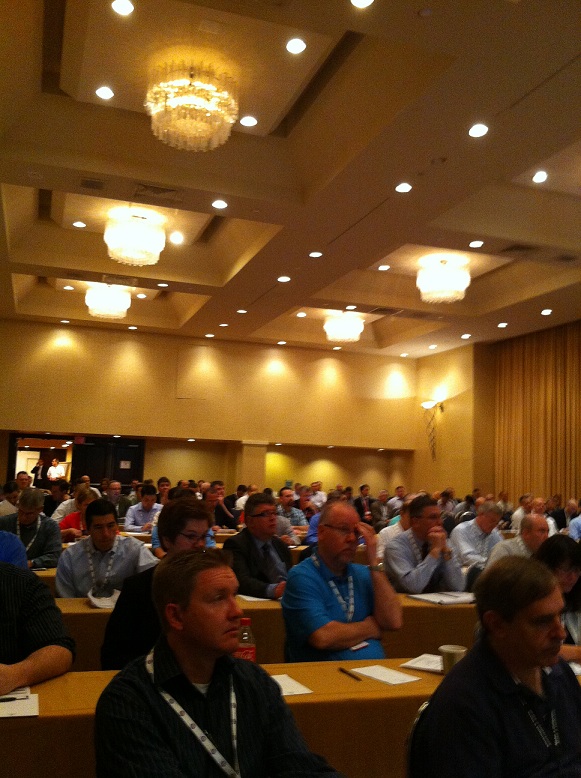 There was a frenzy of activity with delegates in the group tearing off their iPad covers and reaching for magnifying glasses to read the small print on their devices and chargers. Others consulted the Apple website for the iPad’s technical specifications. But the upshot was that nobody could tell conclusively whether the iPad complied or not. Quickly the attention shifted to Apple. One individual airline wouldn’t have enough clout with Apple to be able to get an answer to this question but if they acted together as an industry… maybe the guys in Cupertino would sit up and take notice.

One onlooker commented that we were potentially witnessing history in the making. Was this the moment that the airline industry realised that they weren’t able to use iPads in the cockpit anymore? I thought I’d better take a photo just in case.

The day concluded with the FAA guys agreeing to get in touch with their contact at Apple to seek confirmation of their battery testing standards and with the various airline delegates agreeing to do the same. If the answer is negative then there will need to be some serious rethinking in our industry and some pretty big headlines as a result.