Qantas’ Airways is Australia’s largest domestic and international operator. Its network spans 46 countries across Australia, Asia and the Pacific, the Americas, Europe and Africa with operations that include over 6400 flights per week domestically and over 920 flights per week internationally to over 40 destinations using a fleet of more than 150 aircraft. Furthermore, the Qantas brand reputation has been confirmed by a range of awards …

From an engineering perspective Qantas Engineering completes about 1.6 million tasks per annum, employs over 4000 people and is making the transition to Civil Aviation Rules 1988 (similar to EASA regulations) this year:

However, like many legacy operators, Qantas was confronted with the consequences of its heritage. The procedures manual, which had been developed over 90 years, comprised more than 800 chapters and its Maintenance Information System was written in 3 and 4GL COBOL over 20 years ago. The broader engineering IT landscape comprised over 300 applications. The current procedures manual had evolved over 30 years with bits added on everywhere (normally in response to a quality finding): 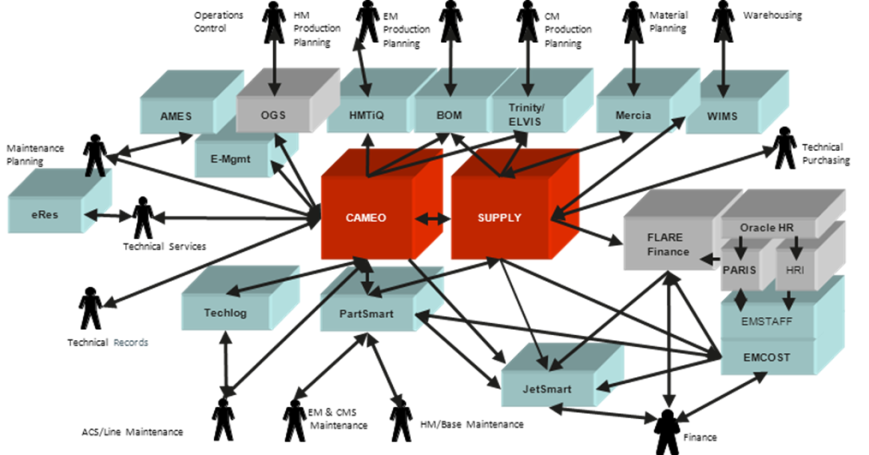 From an IT perspective, the maintenance information system (CAMEO) and materials management system (SUPPLY) had been written in-house during the 1980s using 3 and 4 GL COBOL. These were delivering low levels of process enforcement, were not user-friendly, were difficult to train people to use them and comprised a system that was difficult to support. Moreover, the system achieved poor integration with the company’s enterprise architecture which is Oracle 11i suite.

A transformation was required but it would need to be so comprehensive and ubiquitous that it was determined it would be best achieved as a major project in its own right.  As part of the enterprise transformation, Qantas embarked on a journey to reform its process management framework and update its IT landscape under the guise of ‘Project Marlin’.  The process transformation included a complete re-write of the procedures manual that not only formalised the procedural framework using a standardised taxonomy but also reduced the number of chapters in the procedures manual to 340. Whereas in the past the procedures had been disseminated via pages of wordy descriptions, the new procedures manual comprised flow charts and information mapped documents. The IT environment was completely revamped. At the core of the IT environment changes was the implementation of a new MRO IT solution, Maintenix; the old green screen environment was replaced with a completely new HTML environment in Maintenix. 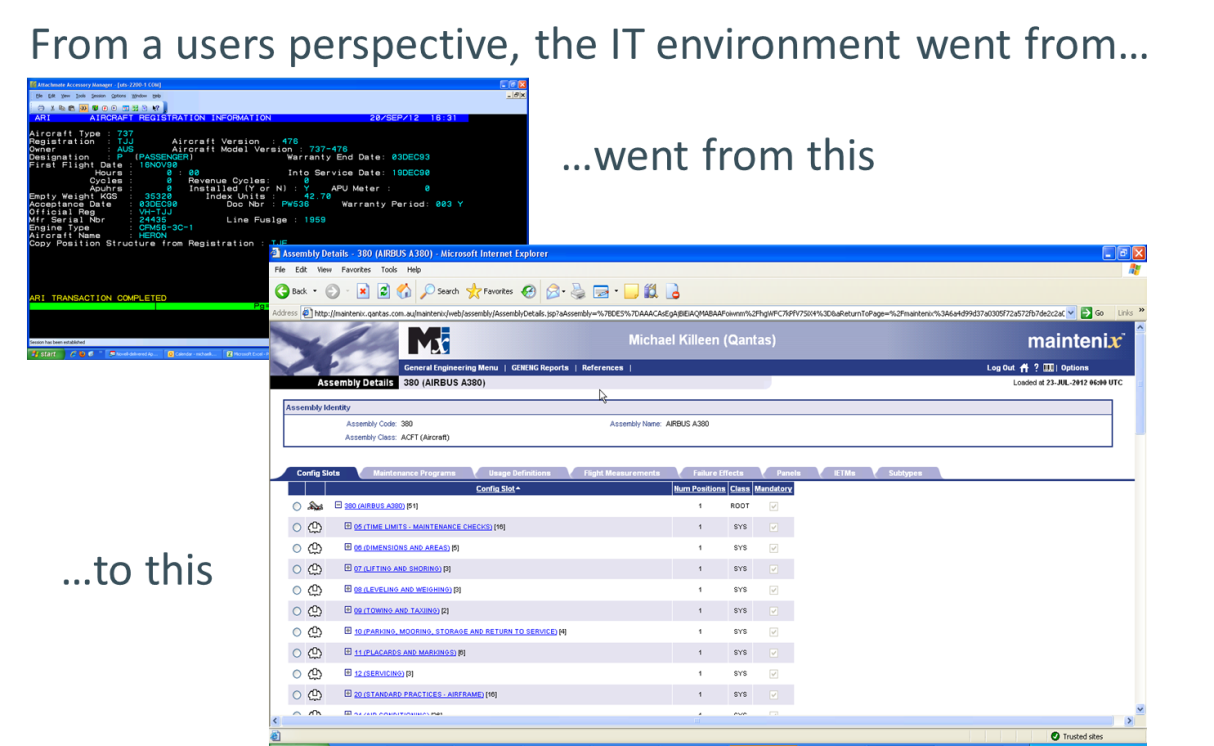 Whilst Qantas chose not to roll out tablets as part of Project Marlin, one should not under-estimate the effort required and the impact on its people of transferring 150 aircraft in 12 months from the legacy to the new system. In getting ready for the move to Maintenix and ‘point of maintenance acquittal’ Qantas:

As a result of Project Marlin and the changes that it brought about in the overall operation, 14 IT applications were decommissioned as their functions were absorbed into the MIS at the heart of the IT architecture. 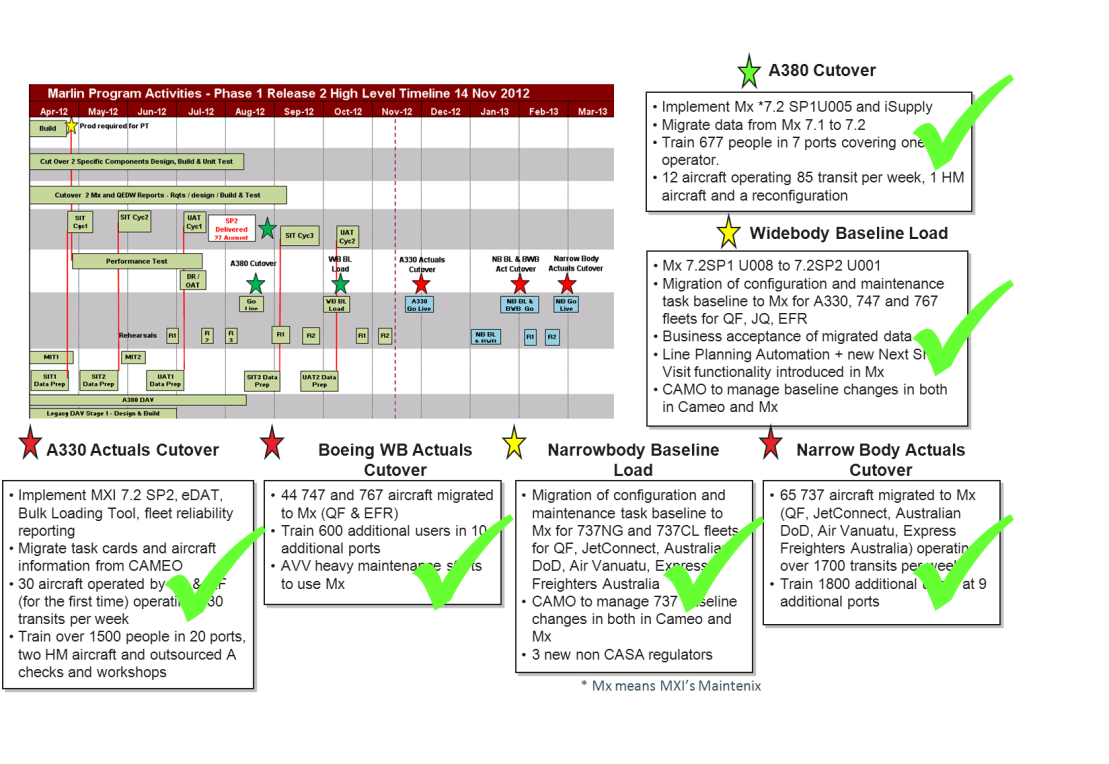 Project Marlin was a major undertaking for Qantas. The project ran for over three years and, at its peak, had over 250 people on board. With a project of this size and complexity governance was a significant contributor to success. Project governance, which included Board Reporting, was based on ‘8 keys to success’.

Project Marlin was not always plain sailing but some of the lessons we learned might be useful for those who could be newly embarking on a similar exercise.

Whilst Qantas encountered some challenges, the transformation of its processes and IT environment serves as a platform for the enterprise to re-invent itself from a legacy airline to an agile customer focused organisation. No one should under-estimate the effort that these sorts of transformation activities take but, if airlines are to continue to deliver increased levels of safety and efficiency, point of maintenance acquittal and the process and IT transformation that Qantas has implemented, will surely be a step along the way.