Not just a node on your network – Aircraft Connectivity 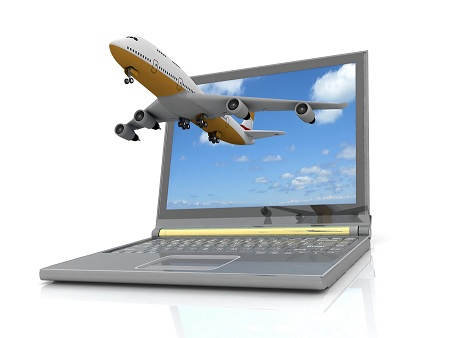 Aircraft Connectivity: Not just a node on your network

Walt Akerley Technical Director, Airline Systems for Aeromechanical Services (FLYHT) takes a look at aircraft connectivity from the perspective of the whole aircraft

Aircraft connectivity is a topic hotly discussed in online forums and in conferences around the world. One of the main reasons for the increased tempo in this discussion is that, in the last few years, a number of new connectivity solutions have surfaced – particularly in the area of satellite and wireless communications. And with increasing connectivity comes an increase in the number of available solutions.

Many solutions focus on a single transport method and ignore the potential for data transport efficiencies across modalities, turning a blind eye to additional costs. As a result, on the aircraft, we are now experiencing the unwelcome phenomenon of ‘stovepipe’ development and point-to-point integrations that handicap the integration of ground based systems.

In response to that current paradigm, this paper presents an invitation to look at aircraft connectivity from a holistic perspective using shared technologies and overlapping systems to create a ‘smart aircraft’ that can properly manage the inbound and outbound data in an efficient and cost effective manner. 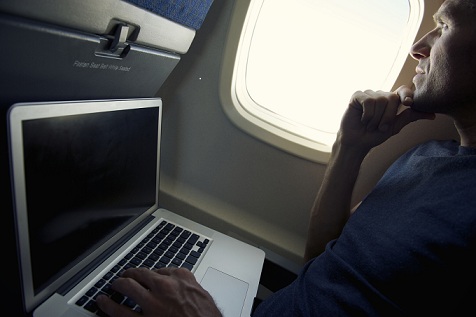 In the past, architects of aircraft connectivity solutions have branded sections of the aircraft into domains or regions. In large part the effort to maintain separation was to keep the regions from accessing each other – securing them from unauthorized access or data corruption. Of interest to all parties was the need to keep passengers on the aircraft from accessing (or causing interference with) the avionics systems on the flight deck – to prevent possible aircraft operational issues.

The three domains used to quantify the different systems on board the aircraft are:

These are the avionics used by the flight crew to maintain the safe operation of the aircraft. Systems include:

These are the systems used by the Inflight crew at the back of the aircraft and are usually related to passenger information or customer service duties.

These are the systems used for passenger access. These solutions can be implemented as an internal wireless system to allow passengers’ Wi-Fi devices to connect to a central router on the aircraft. The router may also allow access to internal systems (stored movies, television, etc.) or it may allow access to ground systems either by satellite or wireless air-to-ground.

Once these domains became standardized, developers in each domain recognized that they needed to supply a connectivity technology to their customers as part of the solution. As a result, many domains or regions became closely coupled with a particular transport technology. Some solutions use satellite technology (as Ku and Ka technologies become available), some use wireless air-to-ground – using existing or proprietary ground networks to route data between the aircraft and ground based systems and services.

Each domain on the aircraft has its connectivity patterns, typically based on user or system requirements.

Most flight deck systems use ACARS to send both safety services and non-safety services messages from the flight deck to either AOC or ATC (Air Traffic Control) systems. This system uses VHF, HF, or Satellite (Inmarsat or Iridium) for the transport mechanism.
Available: On the ground or in flight.

Originally all of these systems used a ‘store and forward’ technology. This means that the systems were loaded with data before the aircraft departed and data was then downloaded to ground systems after the aircraft returned to the gate. As wireless or satellite connectivity is being implemented for passenger use, these systems are being migrated over to use the passenger technology to provide real-time processing.
Available: In flight and on the ground (if using airport Wi-Fi)

Many different configurations have been used over the years to provide varying levels of connectivity for passengers. Most solutions provide an internal wireless network that allows passenger device connectivity to the central router. From the central router, various Ku and Ka band satellites as well as wireless air-to-ground systems can be used to provide access to ground systems.

The typical criteria for choosing among connectivity options is the bandwidth passengers will expect to use which, in turn, is driven by the functionality passengers are buying. For example, in the case of a single-aisle aircraft or when passenger services are restricted to sending text messages or emails connectivity might be limited to a 32K or 64K bandwidth. In the case of a wide-body aircraft or supporting full Internet passenger browsing substantially more bandwidth will be necessary.
Available: In flight only

One of the driving factors behind good connection management is the need for a diversity of coverage in different parts of the world. Similar to cell phone networks, there are many different types of coverage (G3/G4/LTE) with varying costs and varying bandwidth, often even within the same country. Therefore, it’s critical to properly evaluate the connectivity associated with the airports to which your fleet flies. Without understanding the type of data connectivity available and the corresponding cost for transporting data over the local options it is impossible to determine intelligent, cost optimized (minimized) routing options.

Heart of the ‘whole aircraft’ solution

As discussed, there are two major components to the aircraft connectivity solution. The first are the three domains with their varying data requirements and the second is the multiple connectivity solutions with their related costs and bandwidth. To bring the challenges associated with these two disparate domains into an integrated solution requires considering the concept of ‘Smart Aircraft Management’ – provided by an intelligent routing system that controls both the data and the connectivity.

Driven by business rules and costing tables the Communications Manager would automatically select the most cost effective transport mechanism (Satellite, Wi-Fi, GSM, WiMax). The Communications Manager would provide secure login, authentication and upload/download re-start capabilities. It could, for example, use weight-on-wheels and weight-off-wheels as triggers to turn Wi-Fi and Cell Phone connectivity solutions off when in flight and on when back on the ground.

Driven by business rules and data priority tables the Data Manager would determine which data should be transmitted via available connectivity (on ground and in flight). The Data Manager would provide firewalls between domains and file quarantine for unauthorized uploads as well as providing data encryption and compression.

The Connection Manager portion of the intelligent routing system enables the aircraft to make the optimal connectivity decisions based on the connection technology available and the cost and bandwidth associated with each. To populate the connectivity tables, the costs and bandwidth availability from the airports and telecommunication systems within the airline’s routes will need to be gathered and maintained. The more accurate the data, the better equipped the system will be to make the right decisions.

The Data Manager portion of the intelligent routing system enables the aircraft to make decisions about data movement based on tables and rules. The Data Priority Tables define the criticality of the data element to be transmitted. For example, in the case of an engine exceedance it could be transmitted in real-time, while in flight. Such a data event would be tagged as high priority and would be sent as soon as it was generated via whatever transport mechanism was available – regardless of the cost. On the other hand, engine trending reports that are only used to do long term trend analyses should be kept on board the aircraft and downloaded via a less expensive solution when the aircraft is on the ground.

The concept of a Communications Manager and a Data Manager that comprise an intelligent routing system – in addition to the data and connection management – provides the security necessary to allow the aircraft domains to share connectivity solutions and yet keep them secure from each other. Its configuration ensures that no two areas overlap between the domains that are not managed.

Smart Aircraft Management allows all three aircraft data domains to share technology while always seeking the lowest cost solution. For an example, if the aircraft is equipped with broadband satellite technology for passenger internet connectivity, that bandwidth could be used for downloading large files (such as FOQA (Flight Operations Quality Assurance) much more quickly and less expensively than either through a Wi-Fi or GSM network. 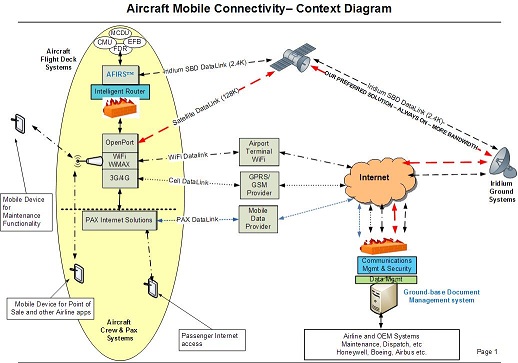 The concept of Smart Aircraft Management and an intelligent routing system covers the two major connectivity issues currently plaguing most airlines. Such a system would:

With these tricky issues out of the way, airlines can begin to properly manage data to and from the aircraft. Operators can make decisions about priorities and costs that are driven by their own business processes and not by the market.

Additionally, with such technology in place an airline can now start to be innovative about connecting other devices on the aircraft into this system. The EFB (Electronic Flight Bag) can be routed into the system to take advantage of a two-way partnership with the rest of the aircraft. If large files (airport plates, aircraft manuals) need to be uploaded to the EFB when it’s on the ground it could use a broad-band satellite connection, if available from the in-flight entertainment (IFE), when not in use by the passengers. If small text files need to be sent to the EFB while in flight such as NOTAMS (notices to airmen), text messages etc., this could be done via ACARS.

As an airline operator you can only be really creative with your aircraft connectivity solutions when you have the proper tools in place to monitor and manage them.