Keeping a track of aircraft at all times

Subscribe
Keeping a track of aircraft at all times 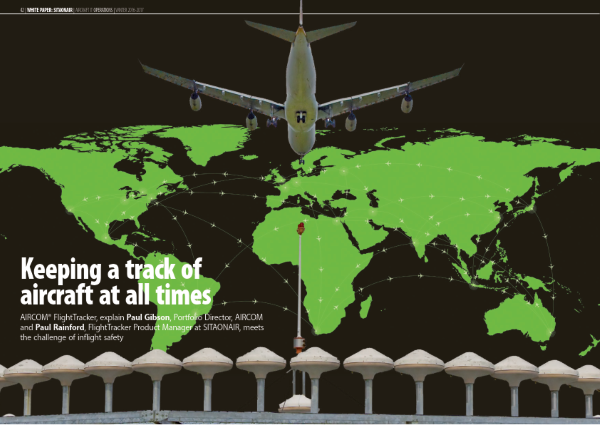 AIRCOM® FlightTracker, explain Paul Gibson, Portfolio Director, AIRCOM and Paul Rainford, FlightTracker Product Manager at SITAONAIR, meets the challenge of inflight safety
Over the past 70 years, more than 100 aircraft have disappeared and never been found: and yet it is only relatively recently that the air transport industry has focused significant attention on the need for ground staff to be able to constantly monitor the position of their aircraft throughout a flight. The challenge for airlines has been how to incorporate reliable flight-tracking using existing technology on board their aircraft, and avoiding the necessity of making changes to the avionics within their fleet. SITAONAIR met this challenge with the development of FlightTracker.
MH370 AND BEYOND
It is now more than two years since Malaysia Airlines Flight MH370 went missing with 239 people on board. The question people across the world were asking back in March 2014 (how can a plane simply disappear?) remains just as pertinent today. However, while the last two years have yielded few clues as to what happened to MH370, there is now much greater understanding about the importance of flight-tracking technology. The International Civil Aviation Organization’s (ICAO) decision to introduce a mandate from 2018, requiring airlines to be able to track their aircraft every 15 minutes, has added further impetus.
The disappearance of MH370 and the global reaction to the tragedy have had a profound influence on the development of flight tracking systems such as FlightTracker. For a long time we had a very basic flight-tracking capability at SITAONAIR in AIRCOM Server but our main business was facilitating communication between ground airline staff, the pilot and the aircraft inflight. So we already wanted to upgrade AIRCOM Server to be better, more feature-rich; but then MH370 happened, and it changed our focus.
People were asking ‘how can a modern aircraft just disappear like that?’ and ‘why can’t aircraft be tracked?’ With the insight available to us, we knew that aircraft can be tracked, and often are tracked but, for various reasons, this doesn’t always happen. The brief from then on was ‘how can we better use the technology that’s already on aircraft to improve the tracking and make sure that something like MH370 doesn’t happen again?’
ACHIEVING 15 MINUTE FLIGHT TRACKING
FlightTracker has been developed to make it as easy as possible for airlines to comply with the incoming ICAO 15-minute mandate for tracking aircraft. For those airlines that have already deployed FlightTracker to ensure their fleets are ready for the November 2018 deadline, the benefits are obvious. To be seen to be moving ahead of the mandate will obviously put the brand in a better light. In that context, some airlines have made the decision to move early because they could see the risk in waiting until a time when demand for flight-tracking technology is far greater.
The Civil Aviation Authority of Singapore (CAAS) has already introduced its own requirement for 15-minute tracking, a move that has been welcomed by Singapore-based carriers. The ICAO’s mandate was due to come into effect in November 2016, but was pushed back by two years amid concerns the industry wasn’t ready. These things tend to get pushed into the future because people think the technology isn’t available, and the equipment on the aircraft isn’t available. However, in this article we want to show that the equipment is available, that airlines can do it now, and they can do it easily and across their fleet, because FlightTracker is so quick and easy to deploy.
HOW FLIGHTTRACKER WORKS
Airlines that have already deployed FlightTracker are finding it far easier to meet the ICAO’s 15-minute mandate, because it gives them access to multiple sources of position data, including ADS-B, ACARS and FANS (including ADS-C, AFN and CPDLC). The system uses these sources to actively track the aircraft. If one source of data is unavailable, FlightTracker will take automatic actions to generate another source. Not only does this give peace of mind to airlines that they can track their aircraft wherever they are in the world, but it also ensures they do not have to worry about the complexity of managing position data from a variety of sources.
SITAONAIR has partnered with aviation software company FlightAware to ensure this data is presented to the airlines in the most effective way possible. Position data from the various sources doesn’t always come in sequence, and integrating all that data in a seamless way is a complex challenge. FlightAware has significant experience in terms of dealing with multiple data sources; it manages all the data that we provide and enables us to present it to the airlines in a totally cohesive way using FlightTracker. It means that the airlines’ ground staff don’t have to worry about when information is going to come in and in what sequence. They can just get on with their operations, while the system continually monitors their flights.

RESPONSIVE TO CHALLENGES
FlightTracker offers a range of features to help airlines respond to challenges during a flight, including displays of over 70 different types of weather data. Undoubtedly the most significant feature of the latest version is its alerting capability. This ensures that if, for example, an aircraft deviates from its flight plan, or there is an unexpected change in altitude, the ground staff will be notified automatically.
Airlines cannot watch all of their flights all the time, so an automated alerting system is absolutely crucial, and this is a key differentiator of FlightTracker. Airlines can pre-define the parameters that would cause an alert to be issued. When an alert is issued, the system helps airlines to go through their internal processes for escalating an alert, for example automatically sending the pilot a request for further information or providing notification to other key staff.
While FlightTracker has been developed primarily to enhance aircraft safety, it also offers airlines significant operational benefits, even on flights where no alert is issued. One example would be when an aircraft enters a holding pattern as it nears its destination airport. Typically just before its arrival, an aircraft will trigger an ACARS report, telling the ground staff to get ready – for example by readying all the required wheelchairs – as the plane is coming in to land. However, quite often, as soon as that message is sent, Air Traffic Control will put the aircraft into hold. With FlightTracker, the tracking data is good enough to see when the aircraft is going into hold, and it can give position updates every couple of minutes. Airlines, particularly low-cost carriers, operate a very tight schedule and every minute counts. They cannot afford to waste time preparing for a flight that is actually not yet able to land.
SINGAPORE AIRLINES: A CASE STUDY
SITAONAIR has had a long-standing relationship with Singapore Airlines, and in 2001, the airline became the first customer for AIRCOM Server. In 2014, SITAONAIR held a series of workshops with Singapore Airlines to discuss its requirements for flight-tracking and alerting technology, ahead of the Civil Aviation Authority of Singapore’s (CAAS) introduction in 2016 of a mandate that all Singapore-based carriers should be able to track their aircraft every 15 minutes. The parties at those meetings talked through the concept of what they were looking to develop and their requirements, and developed a road map. FlightTracker is a complex product, and has been released over several versions. The latest version captures everything that was discussed with Singapore Airlines in the very first of those meetings.
Singapore Airlines’ two key technology requirements were the ability to automatically manage requests for an aircraft’s position data and an alerting capability. The close working relationship ensured that SITAONAIR was able to shape FlightTracker to meet these challenges. The system automatically generates alerts when an aircraft has deviated from its flight plan, or has not reported its position for a given period. When airlines first use the system, this can initially lead to a high number of alerts being generated if the aircraft does not have the right software or avionics to provide position reports. SITAONAIR worked with Singapore Airlines to help them identify the root cause of these alerts, and this process also helped to tweak the understanding of how flight tracking should work.
For example, in order to comply with the 15 minute mandate, initially aircraft were asked to give their position every 14 minutes. However, with aircraft often using satellite communications when they are outside VHF coverage, it can sometimes take more than one minute for the aircraft to respond. This delay sometimes caused alerts to be sent to Singapore Airlines, which their operations team then needed to escalate. However, in reality the only reason for the alert was that it was taking a while for the aircraft to respond. The solution was to instead request position data every 10 minutes.
Each airline has its own internal processes for escalating an alert, but FlightTracker automates these processes. Each stage of escalation, from making an initial position request via ACARS, through to making a voice call to the pilot, can be initiated via the system. This makes it far easier for airlines to meet the 15 minute mandate. It was possible to implement this solution for Singapore Airlines very quickly and it was installed in the SITAONAIR cloud so the airline didn’t have to install anything locally.
FlightTracker is now deployed across the entire Singapore Airlines group, including Scoot and SilkAir. It has provided Singapore Airlines with not just the software, but also the understanding and support to make it work for them.
A BETTER USE OF CURRENT TECHNOLOGY
All in all, while the new requirements for flight tracking certainly raise the expectations of what a responsible airline should be able to do, FlightTracker demonstrates that much of the technology needed to meet the ICAO and other regulators’ expectations in this is already available on most aircraft. It is in the creative application of those technologies into flight tracking systems that airlines will be able to keep track of their aircraft without an onerous additional investment in new technology.
Contributor’s Details 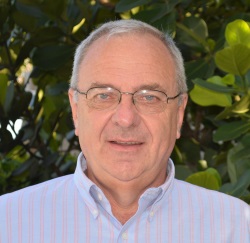 Paul worked in Air Traffic Control and Airline Operations in three UK carriers before joining SITA to take responsibility for the Operations Control and Schedules Planning applications. Paul moved to the Aircraft Communications Solutions division in 2013 and has been responsible for the AIRCOM® FlightTracker aircraft tracking application during that time, overseeing the expansion and introduction of the tracking and alerting application to meet industry standard mandates for aircraft tracking. 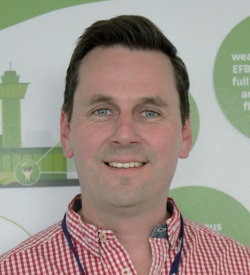 Paul Gibson became Portfolio Director of SITAONAIR’s AIRCOM® solutions in 2015 when the company was launched as part of the SITA Group. Paul had become Portfolio Director of SITA’s Aircraft Services business for Aircraft Applications in 2013 and was responsible for the SITA Airline Operations Applications portfolio. In his role Paul is responsible for defining product roadmaps for SITAONAIR’s airline operational applications, including AIRCOM® Server and FlightTracker. Paul has over 20 years’ experience in the aviation industry specializing in Airline and Aircraft Communications and Operations and has a degree in Electrical and Electronic Engineering from The University of Hertfordshire. He is based at SITAONAIR’s regional headquarters in London.

SITAONAIR
SITAONAIR sets the benchmark for true nose-to-tail solutions, providing the complete range of products and services an airline needs to realize the full potential of the connected aircraft. Its solutions enable airlines to personalize the passenger experience, streamline cabin and cockpit operations, and optimize maintenance procedures. Launched on 1 January 2015 as part of the SITA Group, SITAONAIR has nearly 400 airline customers operating over 14,000 aircraft. It is headquartered in Geneva, and has offices in London, Montreal, Atlanta and Singapore, with 265 staff worldwide.