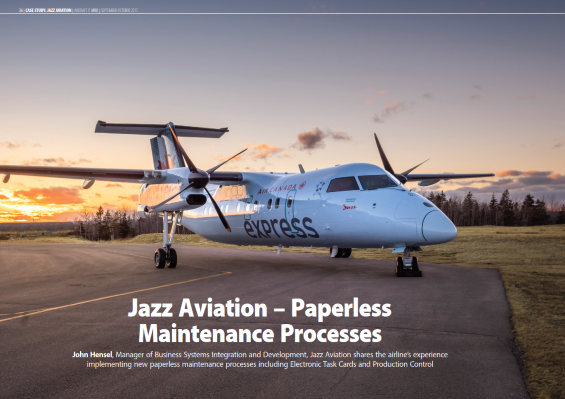 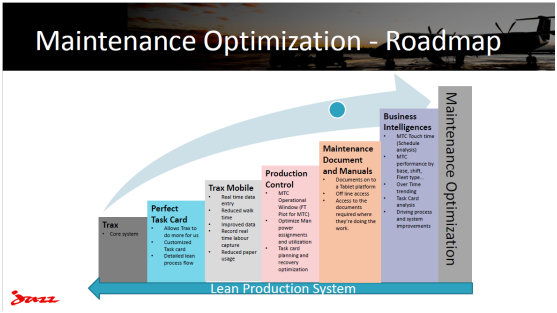 Figure 1
Trax was the core system, housing and managing all of the data like the Perfect TaskCard. The Perfect Task Cards are built to optimize the flow (open to close up) of the MTC (maintenance task card) check, so when power is off everyone is working on TC that don’t require power. The task card are pushes it to an optimizer, which builds the flow/Gantt of the MTC check. The optimization results are driven to Production Control (Supervisors/Crew Chiefs MTC check Management Tool) to give them their Gantt and allowing them to set the assignment for the mechanics. The mechanics complete their task cards in Task Control which then go back to the Trax system (all real time). All the data gets analyzed by Business Intelligence for Lean Process Improvement with continual ‘tweaking’. That is the current process at Jazz. 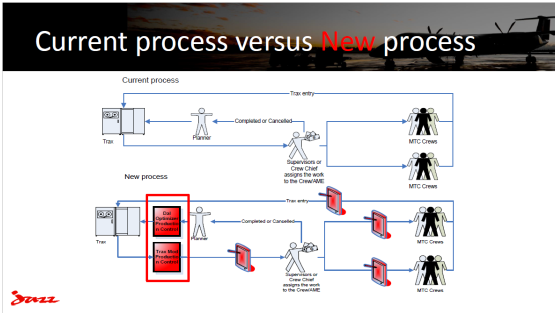 Figure 2
Starting with heavy maintenance
In figure 2 you can see the current process at the top and the new process at the bottom of the figure. With the new process, Jazz has tried to put automation into all the steps on the hangar floor with Task Card/Non-Routine/Parts/MTC Manuals on tablets, MTC Check Flow optimization, MTC Check management Production Control. Jazz currently has 300 heavy maintenance mechanics, they log in to their device and see the task card(s) assigned to them, go to the aircraft and, when the job is done, they sign it all off. We had simplified the process, provided real time data, reduced the back and forth walk time, and inspired farther innovation. Day one with Tablets, the MTC engineers down loaded some Apps to annotation pictures software. They took the picture, annotated it, put all their measurements, details, and material on it right at the aircraft. This real-time data was sent it to the engineering group for assessment.
So, for maintenance mobility, Jazz focused on heavy maintenance to start with the TaskControl app, which handles heavy as well as overnight line work, and day line work orders. The next step will be implementing the Trax QuickTurn app for defect management. Jazz uses Comply365 which gives users their manuals and still uses Citrix on tablets, as there are some old legacy apps such as trouble shooting and similar. But the reality is that the technicians don’t use them. Citrix and Windows apps are not friendly and even though users tried to use them it doesn’t work very well so it will eventually get pulled. We will try to move those applications such as email and schedule to a mobile app. But it is the users who are asking for these things, and that is very good.
THE NEW SYSTEM AND PROCESSES
Setting up the devices
Looking at the whole project, there was a concern that it would scare the IT group. There were already 1,400 laptops and desktops in the business and 500 servers, and now there are also 1,400 tablets. They’re all iOS; various sizes, models and generations of iPad. Jazz averages 22,000 IT repair tickets every year and in the last year we have had 350 for iPads. Out of those 350, 250 were fixed at tier 1 – broken case, broken screen, etc., simple stuff – with a hundred having to go to tier 2 or tier 3. iOS devices are not as complex as Windows devices so you would expect higher reliability, yet that’s only 1.5% of IT’s work – almost a non-event.
The loading of the device has been made straightforward. Jazz gives a tablet to a mechanic who can follow the steps so that, in 15 minutes he has a fully set up tablet and he is ready to go; plus, it is all done automatically. We buy the tablets from Apple, they pass Jazz the DEP (Device Enrolment Program) file which is loaded into Airwatch which talks to Cisco ISE (Identity Services Engine). Then, once the user is fully set-up and has their passwords and everything in the system, in 15 minutes, he has full connectivity to all Wi-Fi, all the Certifications, all the applications; everything is pushed down to the device. Manuals take a little longer (due to a lot of data; at Jazz, maintenance manuals amount to 35 Gigabytes); only the core manuals are pushed down at first. So that is it for the set-up.
Automating the process
Let’s now look at what Jazz has automated… starting with the Perfect Task Card. Jazz takes Bombardier data in SGML, either the Maintenance Task Card Manual or the AMM (aircraft maintenance manual) and analyzes that data. From that data, Jazz can figure out ‘gear up’, ‘power off’, ‘power on’ or, if it is structural, what panels have to be opened first and closed after the job. Jazz gets that data from the task card which, in turn, creates a process flow for the optimizer. So, when the optimizer grabs that data, because it’s all been fed into Trax and pulled out of SGML, it creates a perfect flow.
In the Optimizer, we have the Jazz rules for the mechanics, we have the way we want to do the check with the flow of it set-up in Trax, i.e. ‘Open panel > Complete task card > Close panel’; it’s all in there, so it takes all of the data and it moves panels front and back, see figure 3. It flows the production process out and groups everything, and automatically does it for a thousand task card heavy maintenance event in less than fifteen minutes. 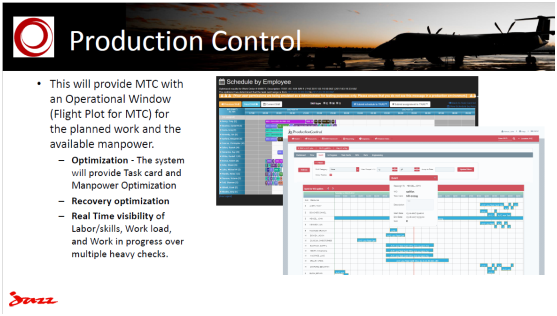 Figure 3
For example – Planning comes running down with a big service bulletin (SB) that has to be fitted in to the process, the users put it in and it is optimized 15 minutes later. Previously, using the old process, the users had their board, put the SB on there, spent time figuring what to do with it and, at the end of the check, asked for more time because they just couldn’t figure it out. They had a thousand paper task cards fixed to a board creating way too many things to figure out manually. All that is now handled by the optimizer and that optimizer pushes it to the Trax Production Control app.
Figure 4 is the Lean board (the web-based Trax Production Control app)… 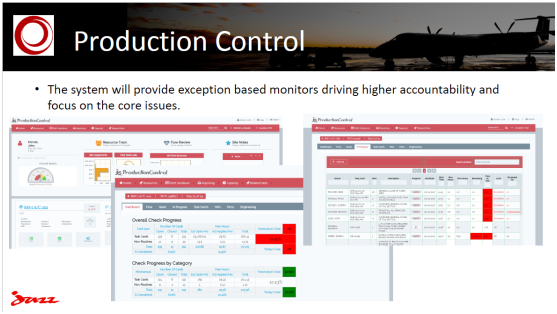 Figure 4
… where the Planners are able to manage the Check day-to-day and it has all the details on it. With the optimizer, Jazz was able to take away 90% of what the Crew Chief had previously had to figure out because it was straightforward, no right or left simply ‘now do this’ and ‘if you do this, do that’; simple logic and it’s all live, connected directly to Trax.
Exceptions
One priority for Jazz was that we wanted to focus on exceptions — ‘what are my exceptions?’ All the data can be seen there but does it mean anything to the user? The screens in figure 4 first highlight the exceptions so that the user can then drill down and investigate with the people involved why the exception has arisen. They can look at parts issues, engineering issues… all that information is in there. So all groups now put all their notes and all their direction in one place. So, when someone looks at that Heavy Check, everything is there, they don’t have to look in different places or send emails to ask for information; it’s all there.
Sharing the information and visibility for all
The other thing that Jazz does is that it takes some of these boards and puts them up on big screens so that when the engineering team is starting to go over things like that, they can also see others asking those questions and it will start to help out. Also, management can see what each tablet is doing, even if the user is streaming music during work time using company band width. The message that users can see a lot more than before is beginning to take hold and Jazz has seen things start to improve.
TASKCONTROL
The Trax TaskControl app: we’ve optimized this; the crew chiefs and supervisors have all their data and now that data is automatically assigned to the mechanics. He has a choice back in the other screen; maybe he wants mechanic A or B to do a service bulletin; that can be changed. But, when we take a look at it and what they’re doing they’re changing 2-3%, they’re not assigning 100% of the checks so it’s a big change. All of the apps that Jazz tries to get are built to be truly offline capable because we cannot always guarantee connectivity but want mechanics to have everything they need; be able to sign off task cards, see manuals, come back out and sync up (synchronize back) to the database to have real-time information.
The way TaskControl is set-up is that a user can work on a thin client or in Trax, they could work in TaskControl, on a desktop and it’s always interactive, talking back and forth. So, if the user is offline and completes something, the record remains joined up with all the data, none of it is lost.
The system is real-time. One of the problems that Jazz used to have with paper was that the mechanics would take their ten task cards, go to the aircraft, would sign everything off in paper, come back and enter the updates into Trax then would leave. Then the Supervisor would look and find that the paperwork hadn’t been completed; it was never real-time. Now it is real-time, users can see everything that’s going on. They can do part requests, part removals, non-routine (NR) creation and editing, RII (required inspection items) inspection and ‘read & sign’ where the process has changed so that users simply log in to TaskControl and ‘read & sign’ is right there, the user cannot do anything until they have fulfilled the ‘read & sign’ requirement, which is then stored so that the company knows that the user has got everything. It also has skill control, i.e. validates skill certifications.
More accurate timing
In the old process, the mechanics were really good at getting compliance, entering their core information and supplemental information such as how many hours it took: we analyzed some data, looked at some task cards and found that the task card was too often set at three hours; it wasn’t real data. With the new system, Jazz is starting to get real data so that it’s really possible to see that we’re overestimating on some task cards and underestimating on others.
SAVINGS
Jazz has achieved a number of savings from implementing the new paperless maintenance processes.
MTC (Maintenance Task Card) optimization
With all that said, there are still some paper components needed for the process.
Paper copy required/Dirty finger print
Everything mentioned above, except QuickTurn, is implemented in production: Jazz is using it and we’re rapidly getting used to it and valuing the flexibility, capabilities and efficiencies that it has added to our processes. Plus, of course, the mechanics find that it makes their tasks easier.
Contributor’s Details 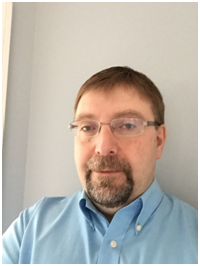 John Hensel
John Hensel is currently with Jazz Aviation LP in the position on Manager of Business Systems Integration And Development with overall responsibility for IT systems in the Aircraft Maintenance division. This includes everything from operation support to design and development to meet the Business units strategic direction. John has worked at Jazz Aviation for over 25 years in Aircraft MTC, Process Improvement/Sigma, and current position BSID. These include Line/Heavy MTC, Manager or Reliability, Manager of CRJ Fleet Management, Manager of MTC Planning, and Manager of MTC Control.

Jazz Aviation
Jazz (Jazz Aviation LP), is a Canadian regional airline based at Halifax providing regional and charter airline services in Canada and the United States, primarily under contract to Air Canada using the brand name Air Canada Express, and also as Jazz Charters. The fleet consists of Canadian-made Bombardier Dash 8, CRJ and Q400 NextGen aircraft, which are among the most efficient aircraft flying today.