We have recently developed methodology at Bombardier Aerospace to estimate the financial impact of premature maintenance and it has revealed the significant impact of pre-date activities on direct maintenance costs. The outcome has diminished the importance of premature maintenance as a conservative and opportunistic policy. In this article, I’d like to share with readers what we have found and how that has influenced the way we regard the notion of getting a job done before it needs to be.

Premature maintenance (PRM) refers to predating maintenance or performing early maintenance so that the actual time when a maintenance task is performed is earlier than its target due date1. As a common practice, aircraft frequently undergo premature maintenance as an opportunistic policy to make sure all flights are flown on time with minimum delay. Moreover, since outsourcing is becoming the dominant maintenance policy, airlines rely on premature maintenance to fulfill the minimum requirements of third parties. Besides, the PRM action might also be a result of inefficient short-term operations, e.g., tail rotation and maintenance scheduling decisions, so that the planned routes cannot guarantee that all tasks are performed on time. In other words, for the most part, master flight schedules are not maintenance-friendly.

Iatrogenic failure and a misconception about reliability
An important impact of PRM is rooted in the concept of iatrogenic failures, those failures caused by the actions of technicians and/or human error during a maintenance activity. From a theoretical point of view, there is a misconception that more frequent maintenance leads to increased reliability. This is a fallacy; increasing the frequency of PRM does not lead to greater reliability. Practical experience in the aircraft maintenance field reveals that opening up a system to invasive maintenance may actually increase the chance of failure by introducing the possibility of iatrogenic failures2. In this case, performing planned maintenance too frequently can result in an increased failure rate, and in turn, more unexpected failures result in higher maintenance costs. The reality behind such human activity induced failures on the part of technicians is the likelihood of a problem being generated whenever anyone touches a subsystem, no matter how casually. According to a comprehensive analysis of airline accident statistics over a 24-year period from 1959 to 1983, 12% of the accidents recorded were caused by maintenance and inspection deficiencies6. Likewise, the report provided by PlaneCrashInfo (see PlaneCrashInfo.com/cause.htm) reveals that 7% of fatal accidents between 1950 and 2000 were caused by air traffic controller errors, improper loading of aircraft, fuel contamination and improper maintenance procedures. Moreover, using information from the Maintenance Error Information Management System (MEIMS), a joint effort with NASA, the FAA, and the US Navy, designed to promote analysis of aircraft mishaps3, 1,016 aviation mishaps occurred between 1996 and 2001 in which maintenance issues were cited as causal factors3. One important result revealed that increased maintenance frequency increases the likelihood of iatrogenic failures, thereby increasing a system’s failure rate; in the end, there are more unexpected failures and maintenance costs rise.

To this end, a severity factor is defined representing the risk of human errors during the maintenance task procedure. The severity factor is measured using the FMEA-DEMATEL (decision-making trial and evaluation laboratory) method4 proposed by our team in 2006 which is for prioritization of failure modes in corrective actions based on in a Failure Mode and Effects Analysis (FMEA) technique. Using this method, the risk factors having the most contribution to human errors during a maintenance activity can be found. That is, the failure modes of given subsystems are prioritized so that the failure modes having more effect as compared to others are assumed to have higher priority/severity. Using the extended reliability function, the effect of severity factor on instantaneous reliability is graphically shown in Figure 1 following. 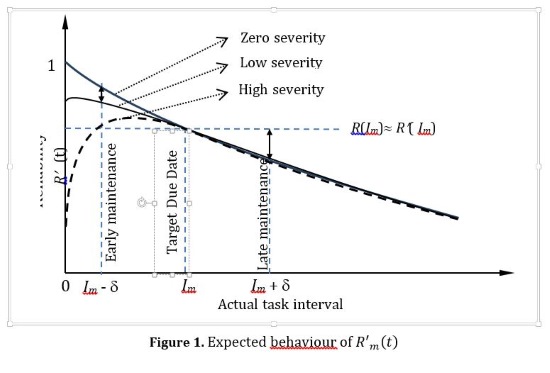 The key message of this article is ‘as with late maintenance, early maintenance may also reduce the system reliability’. Figure 3 below, schematically displays the effect of PRM on instantaneous reliability immediately after a maintenance activity is done. The optimal interval guarantees the target reliability (i.e., as-good-as condition); however, the early activities do not and therefore the overall reliability of system will be gradually reduced.

Figure 3
Experimental Results
For the purposes of validation, the proposed methodology has been applied to a fleet of 10 identical aircraft covering a weekly flight schedule with 540 flight legs in a flight network of 30 airports and four maintenance bases. The average annual utilization of each aircraft is 1924 FH (flying hours). The maintenance program for this type of aircraft specifies six annual maintenance tasks with intervals ranging from 50 to 1,000 flight hours. Based on the ‘In-house’ maintenance strategy, the unit labor-hour cost for internal staff is $55 USD.

The total cost of PRM consists of the cost of doing extra maintenance activities in terms of labor-hours, and the cost of unexpected failures due to the increased failure rate caused by iatrogenic failures, drawing on the EUROCONTROL report5 to estimate the latter cost. The report’s results are supported by an extensive regression analysis of detailed financial and operating data from 22 airlines located in Europe and North America.

The obtained results reveal that the contribution of PRM to total cost is $24,650 per year. This amount is equivalent to the net revenue gained by $24,650/$1254  20 flight legs where the average revenue per flight leg is $1254 considering the average 65 occupied seats, an average flight route of 275 km, and a net revenue of 7 cents per Available Seat Kilometer (ASK). Hence, considering an annual horizon of 52 weeks, the PRM effect is equivalent to [20/(540×52)]

= 07% of the annual revenue. The finding intuitively shows that the cancellation of up to 20 flight legs per year with the aim of performing maintenance tasks on time does not affect the annual revenue. Moreover, in the presence of a dense flight schedule (non-staggered departure times) any increase in the task yield results in an increase of flight delays when the aircraft is late due to maintenance. According to our analysis and EUROCONTROL’s report, the PRM contribution is equivalent to 560 minutes of delay per year.

Capabilities
Using the proposed methodology, the following questions can be answered:

Interesting, isn’t it, how when we apply the logic of mathematics to a received wisdom it can sometimes reveal that what we thought made sense really doesn’t make sense at all. In the case of premature maintenance, we have discovered that, far from having a positive or neutral impact, it can actually degrade not only the efficient use of the aircraft but also that very maintenance caliber on which the aircraft relies. 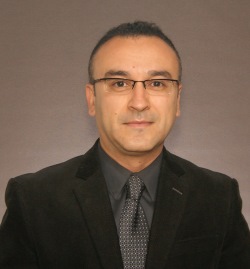 Dr. Nima Safaei
Nima Safaei received the Ph.D. degree in system and industrial engineering from Iran University of Science and Technology. He held a postdoctoral position at the Center for Maintenance Optimization and Reliability Engineering (C-MORE), University of Toronto. Nima is currently with Department of Maintenance Support and Planning, Bombardier Aerospace as a Senior Specialist. He applies the advanced optimization methods to solve the challenging problems in aviation industry and airline operations.

Bombardier
As a manufacturer of planes and trains, Bombardier has an extensive and diverse portfolio of mobility solutions. Everywhere people travel by land and in the air, a Bombardier product is ready to transport them. From business jets and commercial aircraft to high speed trains and public transit that’s smarter than ever. But it’s not just products and services; the most important success factor is 74,000 employees focused on making mobility more efficient, sustainable and inviting than ever before.