Fuel Efficiency and the cost of savings: introducing the new service SFCO2

Fuel Efficiency Savings and the cost of savings: introducing SFCO2®

Fuel and operations efficiency is more than just saving, says Capt. Max Moutoussamy, Head of Fuel Efficiency Services at Snecma (Safran): everything has to be considered
Steadily improving engine and airframe efficiency
Looking back over the past half century, we can see that new aircraft emit 50% less carbon monoxide and 90% less smoke and unburned hydrocarbons than did the aircraft of fifty years ago. It’s the same with NOX where we find that Nitrogen oxide (NOx) levels have also been reduced, with modern aircraft now emitting 40% less NOx than aircraft built in 1981. As can be seen from figure 1, both fuel consumption for engines and the overall amount of fuel burned per seat have fallen dramatically. 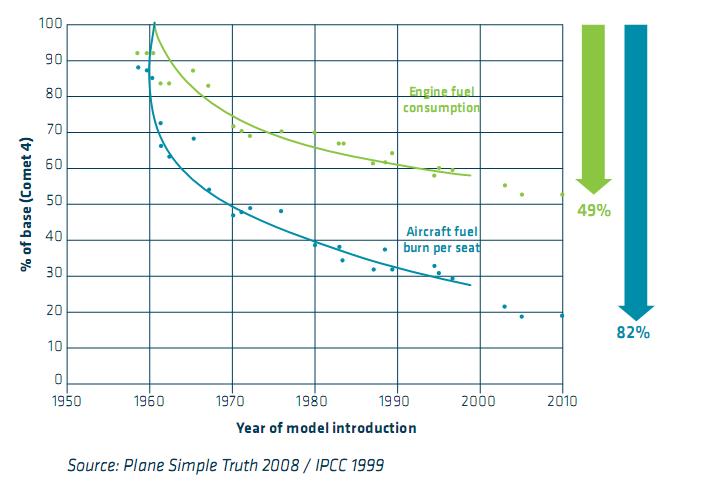 Figure 1
Moreover, it won’t stop improving here: aircraft and engine manufactures are continuing to target further emission reductions, including an additional 80% cut in NOx by 2020. And over and above these improvements, relevant standards and regulations are regularly tightened as with ICAO, which sets standards for NOx emissions and tightens them for each new generation of aircraft.

Notwithstanding any of this, there is still work to be done and the industry has a number of projects underway to further reduce its effects around airports. At the same time, OEMs are addressing noise pollution, as aircraft grow larger and the number of flights increases. Boeing and Airbus tell us that aircraft built today are 50% quieter than was the case even 10 years ago. As a measure of continuing progress in this field, the new LEAP engine from CFM international, JV 50/50 between Snecma (Safran) and GE, for Airbus A320neo, Boeing 737 MAX and Comac C919 has a sound footprint in compliance with future Chapter 14 noise regulation.

When it comes to fuel efficiency, if we look at an aeroplane like the A320, we find that today it is 40% less expensive and more fuel efficient than the early days. In a similar way, a B737-800 can carry 48% more passengers with a 67% increase in payload, while burning 23% less fuel than the early models in the series. Looking at the engine, there has been a steady trend for reduction in fuel burn of 1% a year, which means engines available in 2020 are likely to be some 10% more efficient than engines designed today. But fuel efficiency is not a one-dimensional process. At the same time as engine efficiency has improved, from the perspective of the airlines, they are saving fuel through implementing more efficient procedures and weight reduction measures. These can range from ensuring the plane’s engines are clean to developing and using alternative fuels. So, while significant advances in engine and airplane design improve fuel efficiency, operational practices and improvements can deliver great results in reducing fuel burn.

As the numbers show, taking actions to improve efficiency can make a big difference. Consider the direct operating costs (DOC) for an airline, the costs incurred to keep aircraft flying: forty per cent of that cost is dedicated to fuel and we must not forget that a further twelve per cent is incurred with maintenance. So, altogether, fuel and maintenance account for more than fifty per cent of DOC.

For an airline to reduce a $1 billion DOC bill by 2% there are two solutions available… either increase revenue by $400 million (800,000 more passengers at $500 each) or reduce the fuel bill by $30 million through implementing a program or changing things. There are different opportunities in different domains as shown in figure 2 using IATA sources. 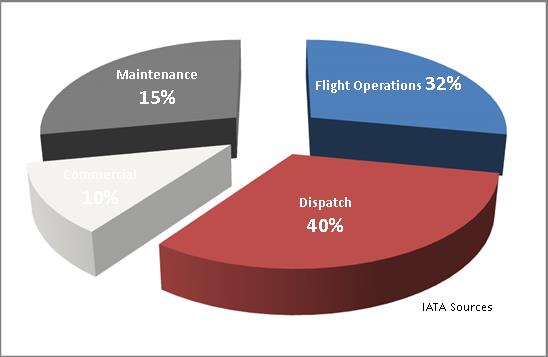 Figure 2
In flight operations, ground procedures (pushback, taxi, take-off, use of APU, flap setting at take-off, etc.) and flight procedures (climb, cruise, approach, landing, etc.) all include potential for fuel saving. Also, in dispatch, Operational Flight Plan (OFP) optimization can make a difference while Engineering and Maintenance can exploit opportunities in areas such as aircraft weight, aircraft performance and maintenance, and engine performance and maintenance. Even the commercial department can consider matters such as on-board commercial weight as part of its contribution to the overall drive for efficiency. If we reduce and optimize in those domains where we can make a difference that can translate into a 1% to 5% potential reduction in direct operating costs.
What will be the real saving?

So, what does a one per cent saving in fuel burn for a single aisle aircraft such as an A320 (it would be similar for a B737) look like? It will typically burn 1–1.5 tonnes (2,400 kg) of fuel per hour over 3,500 hours a year which equates to an annual fuel consumption of 8,400 tonnes per aircraft at a cost of $7,560,000. 1% of that would mean a saving of $75,600 per year. Moreover, a one per cent saving can be achieved just by the actions of the crew or with better management and maintenance of each engine, or even through improved care for the aircraft itself – the surfaces, the paint, alignments – if an airline focuses on each opportunity to save fuel, these fine-tuning actions will soon add up to a significant cost saving.

But, of course, there are two sides to every story and it’s important to identify the trade-off for each of the actions cited above. There is plenty of talk about fuel saving but we also need to take into account the costs such as engine maintenance costs, and other maintenance costs incurred in order to achieve fuel cost reductions (see figure 3). Also, for each procedure mentioned above, it is important to consider the impact on other systems in the business. 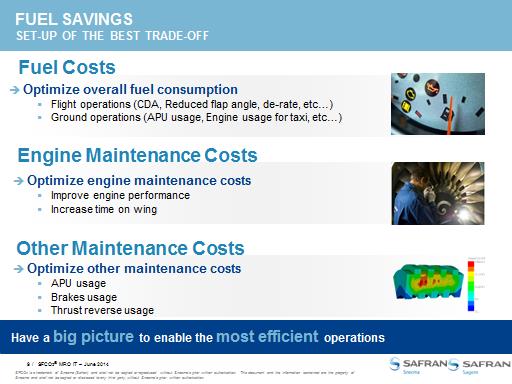 Figure 3
For example: if idle reverse is used on landing that saves $15 of fuel on the ground: but, equally, the use of idle reverse, might mean that more use has to be made of brakes; so the total is not just the $15 saved on reduced use of the reversers because the cost of using more brakes has to also be taken into account. Another example is take-off thrust setting. Everybody optimizes the ‘reduced thrust take-off’ but why is that? Because, in fact, if thrust is reduced, more fuel will be burned… comparing a full-thrust take-off and a maximum reduced thrust take-off, the reduced thrust will burn 10kg more fuel. So, again, why reduce thrust? It is because the cost to the engine for this one minute take-off segment is higher: this is why we stick to that procedure which is the most important way to save money in an airline.

Looking at another aspect of the flight, for a B737 there are three different climb profiles; max climb, de-rated 1 or de-rated 2, i.e. two de-rated levels. But the reality is that the less time that is spent at low level altitudes, the more fuel that will be saved. As far as the thrust level employed at take-off is concerned, if a de-rated setting is used, more fuel will be burned. So the recommendation is for maximum thrust during the climb which will save $20-30 on the whole flight but it incurs a little bit greater wear on the engine because more thrust is requested of it. In order to get the full picture, it is important to know the cost of this extra wear. In other words, when a fuel saving procedure is implemented, it cannot be an action taken in isolation; the impact on other systems such as the engine, the APU, the brakes or thrust reversers needs also to be taken into account.

A holistic approach to operational efficience

Airlines are not short of data and there are a lot of guidelines and best practices available from aircraft manufacturers such as Boeing and Airbus, and from other agencies like IATA  but do these paper documents help to improve the operation?. Where they are implemented in an operation, it can be hard to see and to judge the results. That might be possible with software, or with the combined expertise of consultants. 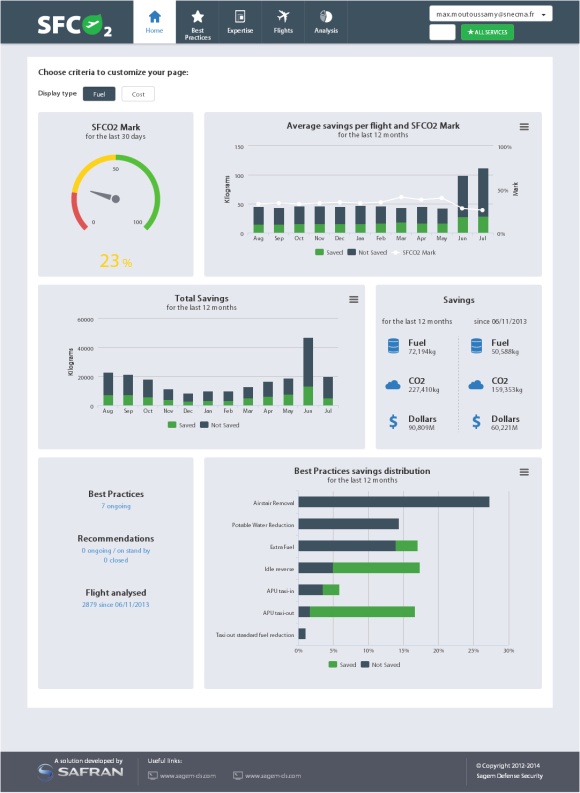 Figure 4
This is why Snecma and Sagem, two companies of Safran, have launched the SFCO2* service, in order to provide an expertise based service to airlines. It does not provide software, although there is a web application to show users the effects of the steps they have taken (see Fig. 4). The philosophy behind it is to help airlines see everything that impacts on costs – not just about fuel saving but about an efficient service.

Everybody in the airline needs to be involved in any fuel saving and efficiency program, not only the flight operations department, engine, wing departments and others but also the top management. It is also useful if those skills in the airline have access to outside experts such as pilots, flight ops experts, flight engineers, engine maintenance experts, brakes and landing gear experts, statisticians and IT experts

Having identified best practices in each domain and as each airline is unique, when potential savings that might be available have been identified, it’s a good idea to highlight the ‘quick wins’ – the best practices that can be implemented with a minimum of effort – as well as continuing to assess potential savings, implement new procedures and monitor results. Airlines might well have the data and the tools but they also need the expertise to use those data and tools.

Fuel and operational efficiency are more complex matters that simply saving costs and, in a busy airline, it might be better to pass some of that work to specialists with broader experience in the field from the implementation of a number of initiatives in a number of situations. 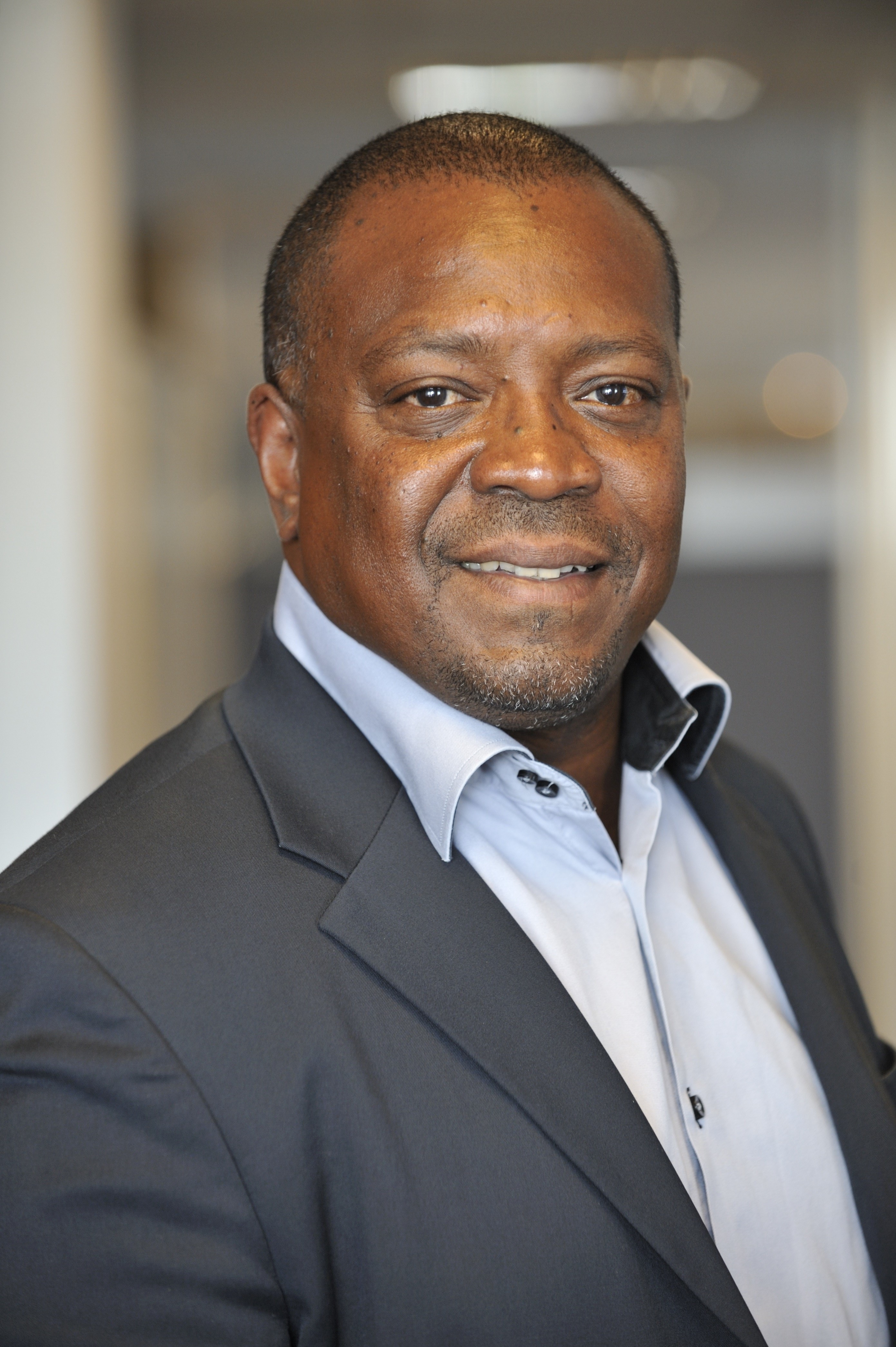 Captain Max Moutoussamy, Head of Fuel Efficiency Services, Snecma (Safran)
Captain Max Moutoussamy is Head of Fuel Efficiency Services in Snecma (Safran). He is also a flight operations expert and has been the Senior Manager of Snecma Flight Operations Support for 12 years. Prior to joining Snecma, Max spent 17 years in the French Air Force as fighter pilot, Captain and chief pilot flying the tanker Boeing KC135. The past years spent in Snecma have enabled him to further enhance his expertise in airline maintenance costs and fuel saving.

(Safran) Snecma is part of Safran, an international high-technology group with three core businesses: aerospace, defence and security. Snecma designs, builds and sells propulsion systems for air and space, including a wide range of commercial engines that are powerful, reliable, economical and environmentally-friendly, led by the global best-seller CFM56 and the new-generation LEAP*. The company also makes world-class military aircraft engines, as well as rocket propulsion systems and equipment for satellites and launch vehicles. Snecma is a leading provider of maintenance, repair and overhaul (MRO) services for civil and military aircraft engines, under the new EngineLife® brand, offering comprehensive support for customers around the world. www.snecma.com / twitter @Snecma

Sagem, a high-tech company of Safran, holds world or European leadership positions in optronics, avionics, electronics and safety-critical software for both civil and military markets. Sagem is the No. 1 company in Europe and No. 3 worldwide for inertial navigation systems (INS) used in air, land and naval applications. It is also the world leader in helicopter flight controls and the European leader in optronics and tactical UAV systems. Operating across the globe through the Safran group, Sagem and its subsidiaries employ 7,500 people in Europe, Southeast Asia and North America. Sagem is the commercial name of the company Sagem Défense Sécurité. For more information: www.sagem.com