Based on his experience of doing it, Stuart Deathridge, Engineering Projects Manager at Thomas Cook Airlines shares some thoughts on a new electronic techlog (ETL) operational implementation and benefits.
History of the ETL
The electronic tech log (ETL) is a relatively recent phenomenon in historic terms having really only emerged in 2004 when Data Systems and Solutions (DS&S) now Optimized Systems and Solutions (OSyS) commenced development of an electronic techlog (ETL). Of course, in IT development time, 2004 is like the Stone Age; but let’s stick to historical time and move forward just one year to 2005 when MyTravel Airways (now part of Thomas Cook Group plc. see below) commenced trial of an ETL solution. This was certainly a success as in 2006 it resulted in the first CAA approval of a paperless techlog. Following the 2008 merger of Thomas Cook and MyTravel, which brought the two groups’ airlines together under the Thomas Cook Airlines brand, it was this new entity that, in 2010, rolled out the ETL solution across the entire fleet.
Today, with an ever growing need to maintain detailed and accessible records of every stage, step and incident in an aircraft’s life, anything that can contribute positively to that requirement will be of value and, in that context, the ETL now stands alongside the EFB (electronic flight bag) as part of the integrated systems architecture that is a modern commercial aircraft. And the ETL architecture has to sit within that overall architecture. 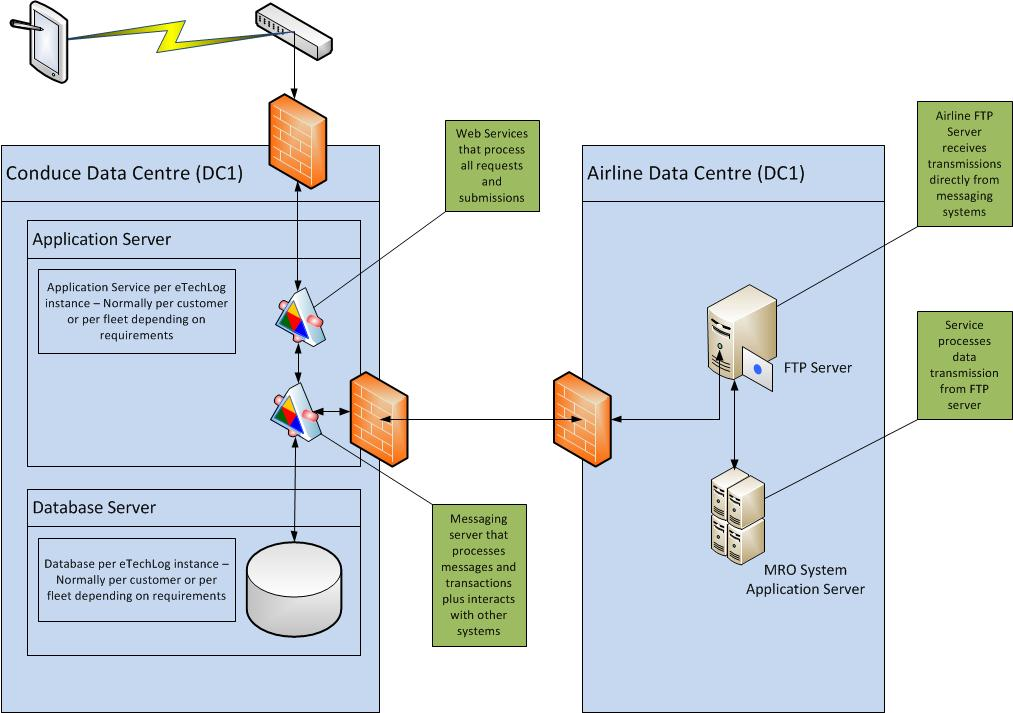 However, as with any software implementation, there are a few things that have to be considered when introducing an ETL application.

First of all is the architecture which will need not only to fit with the wider system’s architecture but also will need to be able to accommodate current hardware and software as well as any that might be introduced in the foreseeable future. The hardware and operating system themselves also need to be considered for their compatibility, scalability and ease of use by the pilots and engineers who have to handle them – too many good ideas have failed through the hardware and operating system making life more difficult for users. It’s a similar story with process and procedures which must add value for users and, again, work with all of the other internal and external priorities and constraints that govern modern aircraft operations.

Continuing this user-led theme, a key component in any ETL introduction will be the training of users as part of creating that end user buy-in on which long term success will depend. It will also be important to plan both the development program and the change control process so that everybody knows what their part will be and so that the implementation is predictable and managed to create least disruption to the normal flow of business.

But, get this right and there will be a number of benefits that will flow from the new system. For the future you can expect a timely reception of aircraft data, no more need to wait until logs have been completed and handed over or uploaded. And a timely reception of data means that identified tasks and repairs will be planned and executed more quickly to give less costly aircraft on ground (AOG) delays. Not only will the data be timely but it will also be more accurate which improves the quality of the resulting records (very important all-round) but can also contribute to cost savings with more reliable data supporting less need for ‘contingency’ over-ordering of parts and consumables. Again, putting that into context, the data will be more usable for multiple uses such as a better understanding of fuel usage for ETS (Emissions Trading Scheme) purposes, invoice reconciliation etc.

The next stage is to select the various components of the new system starting with the hardware – the class of host device to be used. The first choice will be to use the existing EFB architecture, if that exists, and that can offer a lot of benefits, not least getting best use from hardware and architecture that is already in place. But if the ETL is to be stand-alone, then the choice will be much as with EFBs, i.e. between laptops and tablets. Given the working expectations of the equipment, quite a few users opt for ruggedized models of whatever they choose.

With the hardware, it will be necessary to select an operating system although this will often be a part of the overall system chosen. And finally, there has to be a telecoms service provider selected to link the ETL to the external systems that will use the data it collects. Several considerations will need to be taken into account. How well will the ETL be able to communicate with the wider systems that use its data? Is in country home coverage and performance good and, given that aircraft tend to spend a lot of time away from their home country, how good are the roaming partners and availability away from home? Finally, how good is the backup and support for telecoms should they go wrong?

Experience suggests that you should spend as much time on this as you can. Most procedures only need wording change but there might need to be new ones to cover the control and development of the system. While the regulatory requirements don’t change, the methodology to support and meet those requirements will change with the new methods of collecting, collating and delivering data.

Also, any new installation on an aircraft will need regulatory approval, certainly for the new system in any particular airline and usually separately for each type of aircraft fitted. Good advice is to engage with your regulator early. We found that even though the ETL was introduced as direct replacement for the paper, mimicking all functionality of the old system, formal applications had to be made to the local regulatory office for software changes affecting functionality.

Often the most stressful time in any implementation is the software ‘go-live’ and the roll-out of the new system across the fleet and business. This need not be the case if a few simple steps are taken. Speaking from experience, I’d say plan well ahead and remember that development, testing and deployment are all likely to take longer than first expected. In particular, and harking back to that user ‘buy-in’ that we mentioned earlier, make sure that thorough user acceptance testing is conducted  and that note of any feedback is taken and acted on.

A good idea is to form a steering group to develop ideas, collate feedback and ideas from the testing process, define and identify goals and targets, and manage the transition by enforcing control and restraint, especially to avoid specification creep. The group should also take note of any lesson learnt. Rollout can take too long if you have a dispersed operation; a steering group brings focus and directional stability to the whole process.

One other piece of advice: investigate and develop software that is capable of being updated remotely. This will save a great deal of time and also help to support consistency across the system if all updates are conducted with one procedure.

There will be some issues with most installations and these can result from either equipment or software malfunction (less likely but don’t discount it) or lack of understanding on the part of users (more likely, especially if training has not been up to scratch – see above). Sometimes you’ll be told that ‘the ETL cannot establish a connection – it must be U/S!’ for which there can be a number of reasons in the telecoms or even in the use of the equipment by pilots and engineers. The important thing is to establish what is really wrong, and ensure that the user understands the problem and how he or she can prevent it recurring. With a complaint such as ‘The ETL takes longer than the paper log to complete’, it is usually in the early days that users still finding their way around the system can be frustrated but, again, properly checking what is happening and then ensuring that the user understands that will avoid anybody feeling that they are ‘on trial’ with the new system.

Once the new system is fully installed, up and running and in daily use, the benefits will soon become obvious enough. We mentioned some before but it’s worth looking again at those and others that will flow from the new system:

All in all, as with any system upgrade or, in this case, complete transformation, the changes cannot be achieved without effort and they will certainly engage a significant number of people in the critical phases of development and implementation. However, also as with any system upgrade, the outcome will not only be the better operation of a critical system (in this case the tech log, critical for maintenance, efficient operation and safety) but also the improvement of the operation and the revelation of information and opportunities which, if properly leveraged, can add real value to the efficiency and cost of the operation.

An ETL application presents a major shift in attitude towards the handling of log data which means that you and your regulator will be embarking into new territory; so it pays to work closely together from the very beginning. Time and effort invested in training and procedural changes will pay off with a smoother uptake and less snags during implementation and rollout.

On a wider scale, the advent of EFB’s and the paperless flight deck will make future changes and introductions easier for TCX (Thomas Cook Airlines) and any other operator and, although it took a while to gain acceptance, we wouldn’t try taking it off our line engineers now! In short, we’ve only just begun to realise the potential of the ETL.

This article is based on a presentation delivered by Stuart Deathridge to the ‘6th Annual Flight Operations Conference’ in London, December 2012.

Since I gave this presentation in 2012 things have really moved along for ETL at Thomas Cook.  The biggest change is that OSyS have passed the product on to Conduce Group to maintain and support.  Conduce replaced the backend server infrastructure resulting in substantial speed and reliability improvements.  We now have transmission success statistics of around 98%.  (Previously we were at 92%) Conduce also provided a new website which gives us a Google map view of where the ETL’s are around the world. 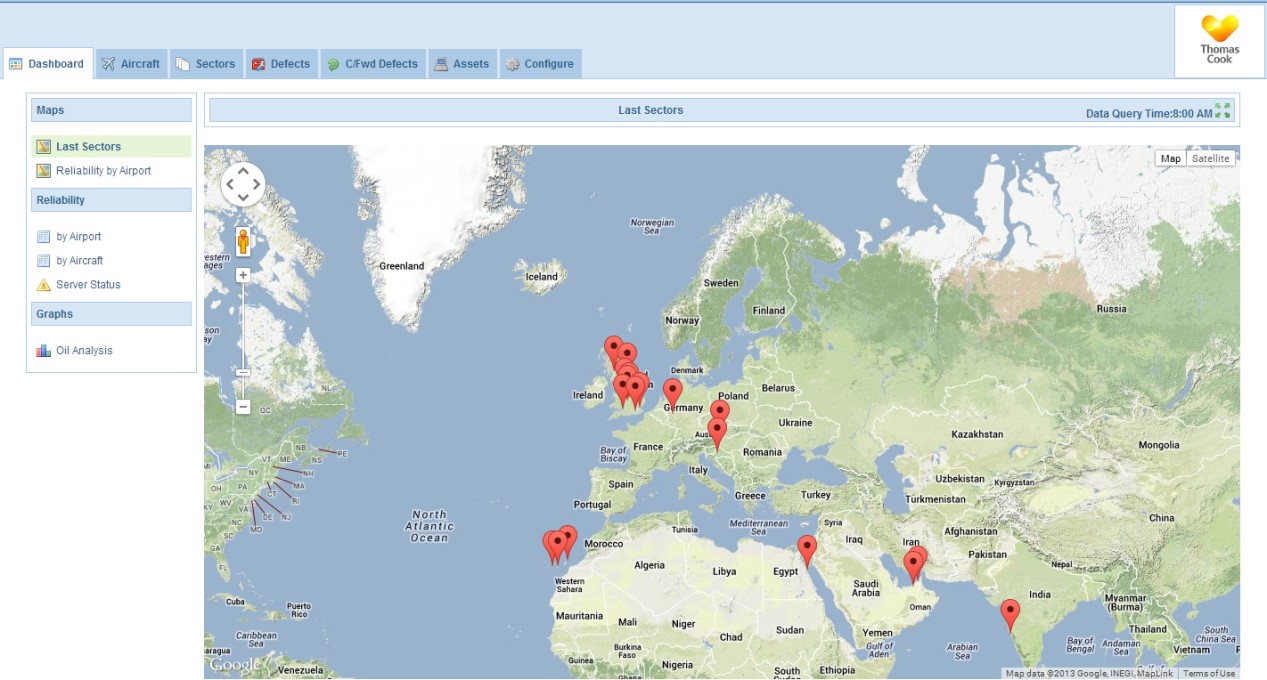 The current ETL in use with the fleet works on Windows XP Panasonic ToughBook’s – some of which are now nine years old and have given remarkable service in the demanding line environment.  This year Panasonic launched the ToughPad FZ-G1 and in October Microsoft released the all new Windows 8.1 operating system.  Conduce immediately put together a development team to produce a Tablet Touch application to realise all the advantages of the ToughPad, along with the new User Interface for Win 8.1 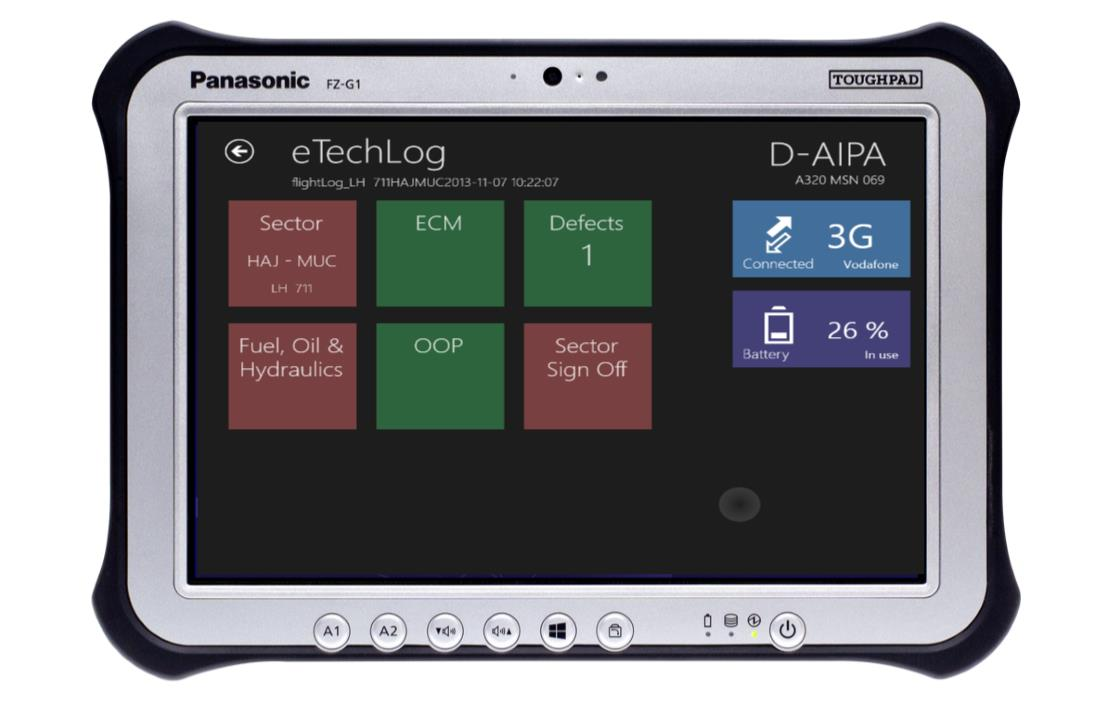 The ETL has now been re-branded eTechLog and with its big Fat Finger Friendly buttons is a much faster device to use and indeed even just to boot up, which should result in shorter turn-around times being achievable on the line.  We are now looking at when we can roll the Win 8.1 Touch App across the fleet, on the new devices – hopefully in Q2 2014.