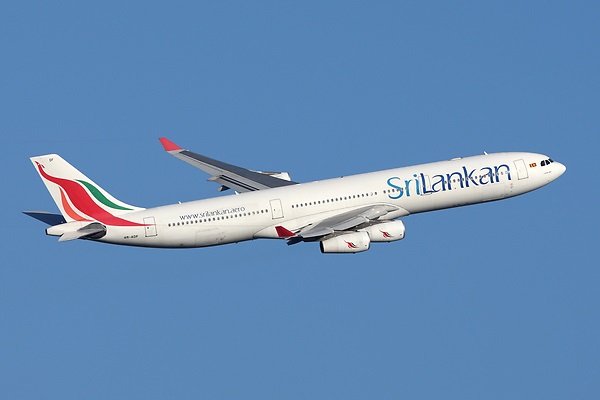 The first EFB (Electronic Flight Bag) program at SriLankan Airlines was initiated during 2005 under the then Emirates management. At that time, the technology available for this purpose was based on commercial Laptop Solutions with Windows based software like the Airbus LPC (Less Paper Cockpit). The main disadvantages were high implementation cost, non-availability of electronic charts and restrictions to inflight use due to the lack of proper mounting technology. Also, laptops were not popular amongst Crew due to their weight and bulky design. In the end, the program was never implemented due to financial concerns and an uncertain return on investment (ROI). SriLankan decided to retain hardcopy paper manuals for use on board aircraft and to issue the Airbus LPC to Crew in addition to their personal Airbus hardcopy FCOMs Flight Crew Operating Manuals). The LPC browser based manuals were very unpopular amongst senior Crew whereas the junior Crew preferred this system since the tiresome manual process of updating the hardcopies could be avoided. The main disadvantage was that the presentation / crew interface between the FCOMs and LPC was different and inconvenienced all crew members.

By mid-2011 consumer electronics like the iPad had gained popularity amongst a wide range of crew members from all backgrounds partly because of their intuitive operating systems, lightweight design and the resemblance to normal books or manuals when reading electronic documents. More than 50% of our pilots were privately using the Apple iPad.

At the same time, the very costly exercise of issuing private FCOMs to crew was discontinued due to financial considerations as the prices of hardcopy manuals from Airbus kept increasing. All crew members were issued their manuals on a controlled USB Stick issued by the airline. This enabled them to refer to PDF style FCOMs and company manuals on their private PCs, laptops or other appropriate devices.

Choosing the hardware and software

Also, since SriLankan has been a long-time customer of Jeppesen, the FD (FliteDeck) App on the iPad was made available to all crew members who had private iPads. This turned out to be very popular and Crew not only used Jepp FD at home but also transferred their PDF manuals via the Goodreader App onto the iPad. During late 2011 an Airbus Team made a routine visit to SriLankan Airlines and, amongst other things, the possibility of going digital was discussed: later on this move was approved by the airline’s Flight Operations Management. At the same time the company’s board approved funding for the EFB program as predicted costs for hardcopy FCOMs for the UL fleet were set to exceed the EFB implementation costs by 2012. Flight Operations decided to evaluate different hardware and software solutions. Ultimately Airbus Quovadis was selected due to the OEM’s longstanding relationship with SriLankan and their experience in the approval process. Fokker Services produced an EASA approved mounting for the A320 fleet which thereby became the obvious choice. The favourable experiences of all pilots using FD was instrumental in the selection of Jeppesen as the electronic Chart provider.

We then had to select an appropriate device for the EFB in which we were guided by a number of factors. Alaska Airlines had introduced iPads to all their Crew as an electronic reading device for manuals and became the first airline to do so officially. At SriLankan many pilots were already using the Goodreader App on their own iPads to view their electronic Airbus FCOM in PDF format. And during the EFB evaluation process the iPad always stood out due to its user appeal, low cost and ruggedness. So, finally the iPad was selected as the preferred host for future UL EFB applications.

The first concern to become apparent was the timeline. Since SriLankan had committed itself to going digital, Airbus would cease delivering hardcopy manuals in 2013 however during the Airbus visit in 2011 it became clear that the FlySmart LPC version for the iPad would only become available during the third quarter of 2012. Since the airline had decided to use the iPad as a Class 1 solution initially, an interim fix had to be found. It was decided to commence a trial phase with 20 iPads on the eight strong A320 fleet, providing each Crew member with access to manuals and charts on the iPad in addition to the hardcopies that were carried on board. The iPads were to be used only on the ground and outside of the sterile flight phase above 10,000ft. During this trial period the Goodreader App would be used as the electronic document viewer and Jepp FD for the charts.

The Class 2 Solution using the Fokker Services approved mount was planned to be introduced after the six months trial period that ended in February 2013.

The EFB program required very close coordination within SriLankan. Flight Operations was working together with IT and Engineering at a level never seen before in the organization. This close working relationship turned out to be the key in implementing the program at a very high speed. The airline went from having no clear EFB vision to commencing trial operations for the iPad within nine months, which is, to quote Fokker Services, unprecedented in this industry.

After several meetings between SriLankan Airlines, Fokker Services and CAASL (Civil Aviation Authority of Sri Lanka) approval was granted for trial operations to commence on 29th August 2012 to evaluate the feasibility of using the iPad as an EFB. This was preceded by Fokker Services, which will be in charge of the Hardware approval process, presenting CAASL with data concerning rapid decompression and EMI (ElectroMagnetic Interference). This cleared the way for SriLankan to evaluate the iPad on commercial flights.

In the meantime Quovadis selected a team to be dedicated to the airline for the overall software implementation as well as Network Server integration and approval. This team visited Sri Lanka in August 2012 for the first time to commence work on the EFB program.

Switching to the iPad based EFB

On 29th August 2012 SriLankan commenced the iPad trial operation phase and became the first Asian airline to officially use the iPad on a commercial flight. The first flight was UL205 to Muscat International Airport (MCT) in Oman, operated by an Airbus A320. The two pilots used Airbus Performance Charts in PDF format to compute the take-off performance and Jepp FD enroute charts as well as the Airbus FCOMs in PDF to validate future Crew SOPs (Standard Operating Procedures) with regard to the EFB. 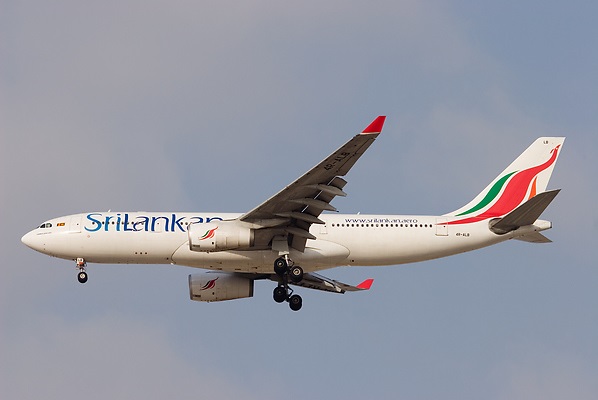 It had been decided early on in the program to nominate the A320 as the lead fleet for EFB. This was partly because sector lengths were less than four hours and thus a full battery charge would be sufficient to operate any flight without inflight recharging. Also the A320 fleet mostly operates turnaround flights, which was very convenient as the iPads were collected by the Crew at Flight Dispatch and returned after each flight. Since the iPads could not be securely stowed on board it was also decided to use them only on turnaround flights so that one set of Crew solely is responsible for the iPads.

The overall EFB program at SriLankan Airlines will include company iPads to be issued to all Crew by February 2013. By March 2013 the Server Installation for Airbus FlySmart on iPad will be completed and all iPads will have access to the Take Off and Landing Performance Calculation module as well as the Operations Library. All A320 aircraft will retain two iPads that can be stowed and locked inside the cockpit at slip stations. The aircraft units will be updated by SriLankan Technical Publications and maintained by SriLankan Engineering.

The Crew iPads will be used for information purposes only and not for operational purposes even though the full Airbus FlySmart software will be installed so that each Crew member can familiarize themselves with the Take Off and Landing Performance and the Ops Library. This restriction has been imposed due to possible interference with other Apps that Crew might use on their personal units and in order not to restrict Crew in the use of their units.

The Crew Training for Airbus FlySmart will commence in March 2013 and by 1st April 2013 CAASL approval to commence full Class 1 EFB operations using iPads and FlySmart on the A320 is expected.

A three month parallel run with both hardcopy and FlySmart will end on 1st July 2013, by which time all hardcopy documents, with the exception of the Jeppesen Charts, will be removed from the A320 fleet. The parallel run was reduced to three months since SriLankan is taking credit from the initial trial phase for the iPad hardware, which proved extremely reliable without a single failure being reported by January 2013. Therefore the parallel run will only evaluate the software reliability of Airbus’ FlySmart.

By 1st November 2013 the installation of all Fokker Services mounts will be completed and SriLankan Airlines will seek approval from CAASLs Airworthiness section to upgrade their EFB Solution from Class 1 to Class 2. In the meantime Jepp FD will have been replaced by Jepp FD Pro giving access to customized Jeppesen Charts like EOSIDs (Engine Out Standard Instrument Departures) on the iPads and finally enabling Crew to use the iPad during all flight phases. This approval process will be simplified by the experience gained on the iPad/FlySmart Class 1 Solution.

Meanwhile, the A330 fleet will commence Class 1 operations from July 2013 and by February 2014 the A330 fleet iPad mount installations will be completed, when SriLankan will seek Class 2 approval from CAASL for this fleet as well. Once again, this approval process will be simplified by the experience gained on the A320 and only A330 mount specific concerns will have to be addressed since the hardware/software will be identical to the A320 fleet.

The A340 fleet will remain with a Class 1 Solution for the remainder of its service life with SriLankan, since the last A340 is scheduled to be retired from the fleet by late 2015 the installation of mounts is not feasible and therefore hardcopy Jeppesen Charts will remain with the airline until replacement of the A340s is completed.

For the future SriLankan airlines is planning to constantly update the EFB hardware as well as software component, through frequent upgrades of Airbus’ FlySmart and an innovative hardware leasing program, which was suggested by the airline’s IT division. With this leasing plan all iPads will be replaced on a two year cycle with the latest commercially available model and Fokker Services will accommodate this process through future testing of new iPad models and modifications to their mounts.

In the future UL will be in a position to truly replace any standard hardcopy book that is carried on board now with an electronic book that is mounted on the aircraft. This is how simple EFB can actually be.

A program in partnership

Fokker Services have designed an EASA (European Aviation Safety Agency) approved iPad Solution comprising a mount and power connection to the aircraft network with a frequency reduction from 400 Hz to 50 Hz. They are in charge of the hardware integration and work closely with SriLankan Engineering to commence installation on the A320 fleet by late February 2013.

Quovadis (an Airbus subsidiary) is assisting SriLankan Airlines Flight Operations and IT in the software integration, Network Server set up and CAASL (Civil Aviation Authority of Sri Lanka) approval.

Jeppesen will liaise with SriLankan Technical Publications in introducing and approving JEPP FD Pro during the second quarter of 2013.