Geneth Daley and Adrian Forbes of Aircraft Performance in Navtech, Inc. consider the challenge of aircraft performance software in a fast paced world

The aviation industry demands accuracy and maximum optimization of data. As cockpits are now entering the digital age and aircraft performance software is being run on EFBs, iPads, and tablets, how do we evolve performance software to keep up with the latest hardware technologies?

Today the big buzz in the aviation industry is ‘low-cost’. In fact, that has been the buzz for a number of years. No… we are not talking about low-cost carriers, but low cost carriers included, every flight operations department of every airline (at least the ones we’ve interacted with) tries to achieve the best payload possible and, at the same time, when possible, reduce their carbon footprint (i.e. be environmentally conscious); plus save costly maintenance dollars by extending engine life.

So, how do they attempt this? Well, one way is to introduce technology into the cockpits – that’s right… another ‘toy’ for pilots to play with. Airlines are required to have performance data for take-off and landing. This data considers the runway attributes and conditions along with metrological conditions and ensures that it is in accordance with the certification rules. As we use computers more and more to perform performance calculations and get better data, ensuring that we have the latest data now becomes an issue. The days of pilots pulling out performance charts and following highly complex graphical procedures to determine aircraft performance is now old… as old as… well, lets’ just leave it at… ‘it’s really old’.

In between then and now (and where a lot of airlines are still operating) the performance data being used by pilots is computed by performance engineers or dispatchers using software in the form of tables and charts which has been printed and included as part of the dispatch package or stored in binders in the aircraft. These charts and tables could be easily referenced, and certainly, give more accurate results than those computed using the ‘antiquated’ graphical means. In recent years, there has been a shift away from this labor intensive method of distribution towards an electronic format, i.e. ‘the next generation’,  of having pilots do the computation in the cockpit using pilot-centric variants of the software to which the engineer on the ground has access.

Market research has identified that performance software has been the key driver for creating an EFB (electronic flight bag) business case. Many airlines have been using performance software in Class 1 and 2 devices for over ten years. The recent introduction of tablets on the market provided airlines with an affordable but, more importantly, user-friendly hardware option for EFB purposes. The superior document browsing capability meant that there was a shift in the market where navigation charts and operating manuals have become a larger driver for selecting hardware and moving to EFB.

The savior – the Tablet

The acceptance and popularity of tablets in the airline industry is well known and well documented. However, this popularity has not translated into an abundance of aircraft performance applications available for iPad and Android tablets.

Tablets are consumer products equipped with various operating systems. Initially tablets were targeted for Internet browsing and reading documents. This means excellent document viewing capabilities and superior user experience.  In fact, the iPad seems to be the preferred hardware for commercial airlines.

Key advantages with tablet hardware include:

However, it’s not all good news for tablet users; along with the good we have to take the bad: there are notable disadvantages with the use of tablets as compared to Windows-based enterprise hardware and there are a number of elements to consider when evaluating the possible use of a tablet for cockpit performance calculations. Most noteworthy among these disadvantages are:

It is important to note that new versions of the tablet operating system and/or the hardware usually require recertification or new software upgrades/tests/verifications.

Other key challenges with tablet hardware include:

Despite the challenges, the financial and environmental benefits of single point, optimized performance calculations cannot be overlooked, but adding performance software to non-Windows operating systems on tablets is in itself a problematic task because of a lack of support for legacy applications and limitations in programming language. The main concern here is the lack of support for a FORTRAN compiler on these operating systems. This means that it is not possible to install and run the performance software using the FORTRAN-based aircraft manufacturer SCAP (Standard Computerized Airplane Performance) on tablets. Various solutions have been explored, but there are limited options available since most of the SCAPs come with FORTRAN embedded making it difficult to extract and/or convert the code without access to the SCAP source code. To date, the main challenges for running SCAP based performance on a tablet include: 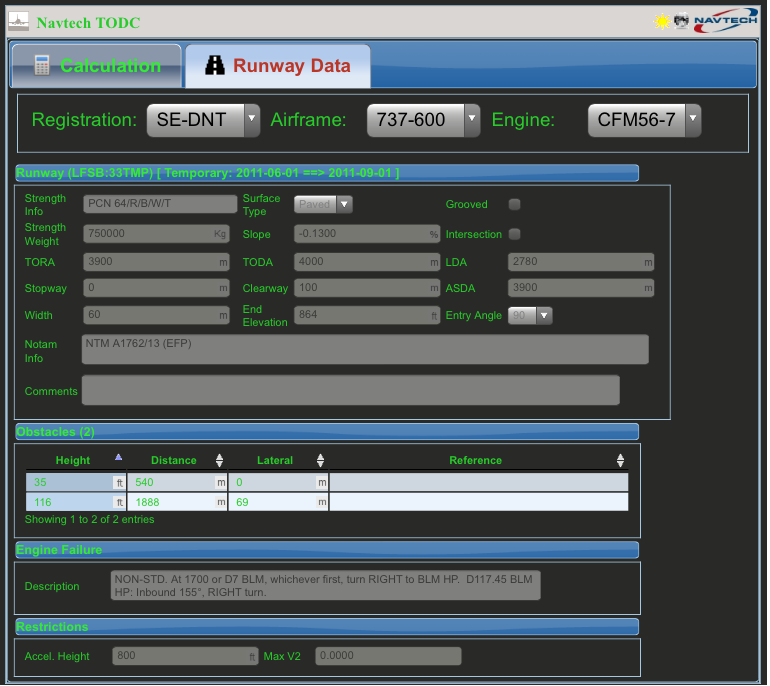 The FORTRAN issue is a universal challenge, and since access to the source code is restricted there are no real technical solutions available which would not involve sub-optimizing the data. The complete solution would be to produce new SCAP decks without FORTRAN or for the aircraft manufacturers to convert or hide the FORTRAN, thus making it compatible.

To date, the following performance solutions for iPad and Android tablets have been explored and developed by Navtech and others in aviation industry: 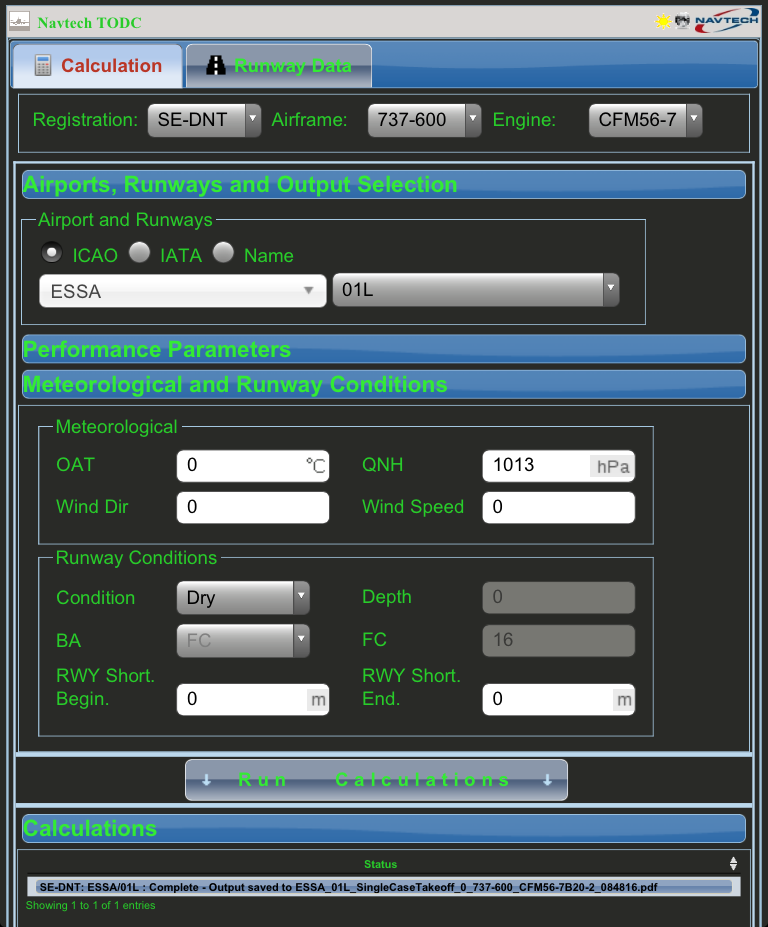 Research and Development [2] is still ongoing and it is believed that in the future (perhaps) EFB solutions will be required to connect at some point, either due to regulatory criteria or for support of other applications used on the EFB infrastructure, for traceability, monitoring, data mining and updating. If this should occur, the result will inevitably be a decline in the market demand for offline performance software. 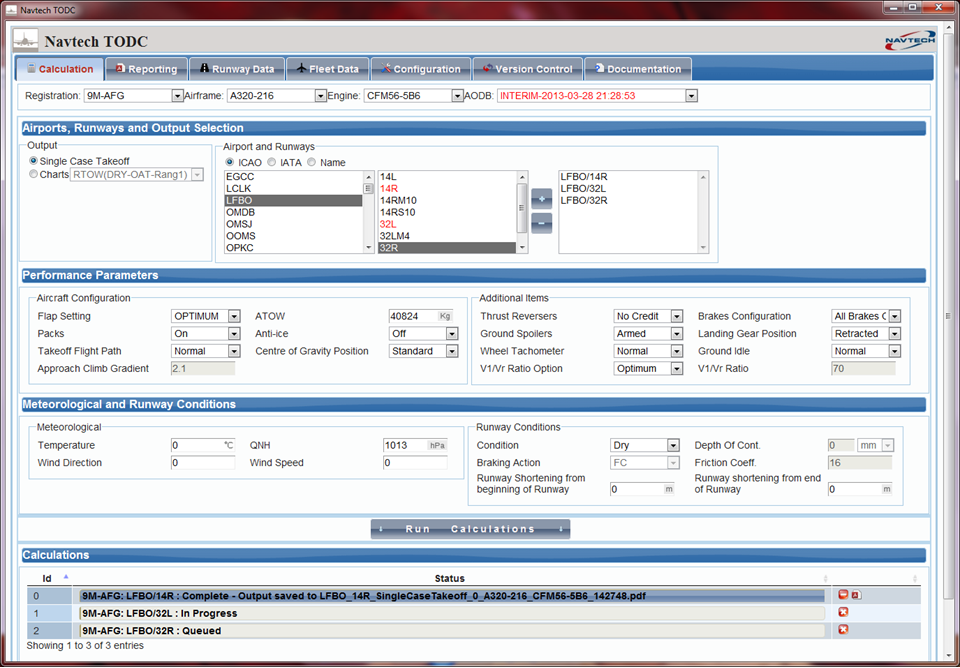 ACARS equipped aircraft make feasible the possibility of a solution that offers essentially a ‘connected’ alternative to tablets and offers several advantages, including access to ‘live’ data [3].  Although it may be slightly more expensive as a result of data transmission costs, the ACARS solution offers a ‘back-up’ plan in the event of failure for any reason of the EFB. Alternatively, if the ACARS solution is used as the primary solution, the EFB could then be used as the ‘back-up’.

Navtech Aircraft Performance provides customized take-off and landing performance solutions for desktop PCs, laptops, tablets, electronic flight bag (EFB) devices and ACARS. The Navtech TODC product suite has been an established performance software solution since its introduction in early 2000. The product has been constantly developed and new platforms and configurations have been added over the years based on market feedback, new technology and hardware requirements. The Navtech TODC system offers flexibility and functionality with various platform options available to enable an easy and affordable transition from one option to another for all the different types and configurations of commercial aircraft.

Navtech’s performance software sits atop an EU OPS and FAA compliant worldwide Airport Obstacle database, based on AIP publications. Full NOTAM surveillance is included, and availability of any airport in the coverage is available through an easy to use secure internet download portal.  Engine Failure procedures are an integrated part of the database.

Navtech TODC Office is software that is designed for use by dispatchers and operations staff. This flexible take-off and landing performance solution uses a simple interface, and provides the capability of producing optimized performance charts or optimized single point calculations. Navtech TODC Pilot, Navtech TODC EFB and Navtech TODC Tablet versions of the software are designed for use by pilots in the cockpit; with easy to use functionality and simple user interface they feature separate take-off and landing options, which are optimized for single-point calculations.

The Navtech performance software, Navtech TODC, is primarily based on the certified manufacturer performance data (SCAP). The SCAP is an IATA standard, dating from 1985, used by aircraft manufacturers for producing their aircraft performance modules. The SCAP module takes two pre-defined vectors as inputs and returns two pre-defined vectors as output. In each case, one vector is alphanumeric and the other one is numeric. All SCAP modules are written in the programming language FORTRAN. One of the primary tenets of Navtech Aircraft Performance products has been adherence to the SCAP data as a basis for the calculations to assure optimization and flight safety. Navtech TODC calls the SCAP module with inputs from the user and airport obstacle data from the worldwide database. The SCAP modules do not handle plain text; therefore, all inputs must be formatted into the SCAP module standard and placed in the correct vector position. For a single calculation, the SCAP module may have to be called several times in order to optimize the data to provide the highest weight or lowest thrust setting.

Navtech TODC EFB offers customization, and has provided airlines with a much needed alternative to the off-the-shelf software provided by aircraft manufacturers and for those airlines desiring standardization with a mixed fleet of aircraft.

The solution we have developed at Navtech is the new Navtech TODC Tablet, a connected application with an HTML interface. It is a hosted server solution where the client access to Navtech TODC is on a ground-based server from the tablet. Designed with pilots in mind, the application can be used to perform single case take-off calculations along with a day/night mode to easily view information in various lighting situations.

Navtech are also supporting operators with the Citrix Server solution for iPad. This online ‘remote desktop’ type installation allows airlines to use the Windows version of Navtech TODC EFB, which accessed from the tablet using a Citrix Server connection.

The airlines’ technical and flight operations department performed thorough trials of Navtech TODC EFB before confirming it was a practicable option for them, whereby they could utilize the fully optimized performance software for the iPad. As a result, the airline is experiencing higher payload, reduced fuel consumption and less engine wear.

The airline has also reported a %N1 (measure of the engine thrust) decrease of 1%. Flybe UK estimated that this has resulted is a saving of US$85,000 per year based on their short sectors and 23 Embraer aircraft. They can also now eliminate the printing and distribution costs of paper performance charts, a further saving of US$95,000 per year for their Bombardier and Embraer operations.

Geneth has a wealth of academic, as well as hands on experience having gained a Bachelors Degree in Aeronautical Engineering and a Master of Science in Engineering Computation from Queens University in Belfast, Northern Ireland. She also has 10+ years experience at Navtech in software design and the programming of take-off, landing and weight & balance software, and has been integral in the redesign of Navtech TODC take-off and landing software. Geneth has been involved in many EFB implementations.

Adrian Forbes has more than 20 years experience in the aviation industry. He has held various positions in airline flight operations and holds a BSC in computer science from the University of the West Indies. He joined Navtech in 2011 in his current position of Manager, Aircraft Performance and resides in Waterloo, Ontario.

[1] The problems with SCAPs on the iPad may be a thing of the past. An Aviation IT company has developed a method of creating iOS compatible SCAPs. The stumbling block for this solution is that it requires the aircraft manufacturers to make their FORTRAN source code available rather than the pre-compiled data that they currently provide. Navtech Aircraft Performance will be watching closely as this option develops with the hope of implementing these iOS compatible SCAPs into the Navtech TODC software

[3] Live data is defined as data which requires no pilot interaction to prompt the local data to be updated.