In part 2, Bill Vlases, Manager EFB Solutions at Boeing considers how to implement connectivity, what benefits it will deliver and the business case for it. 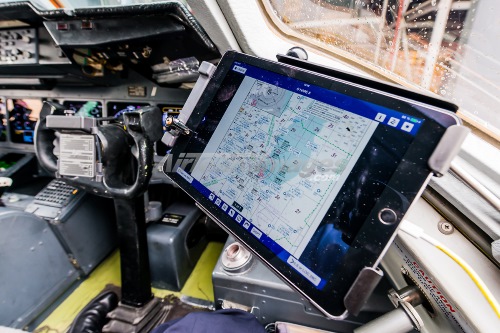 In the previous issue, we considered what connectivity is, and when and why it is needed. We looked at each phase of flight and determined the benefits of a connected EFB. In this issue, we’ll go on to the final three of our five categories of EFB questions: How do I implement it? What does it do for me? And how do I sell it?

CONNECTIVITY HARDWARE
If we agree that connectivity is a good thing, why has the adoption rate been so slow? There are a number of factors playing into this such as regulations, security issues, cost, lack of clear business drivers, external airplane requirements (for example GATELINK, cellular and others) as well as mixed fleet considerations with older aircraft.

It might be more constructive to answer the question: ‘How do you implement connectivity?’ Airplane equipage will vary from type to type but we can break it down into four main components.

Picture a pilot or cabin crew member, walking on to the plane with their tablet.  In order to complete the connectivity link and get access to aircraft onboard data and to off-board communications, several things need to be in place.

The first required piece is an actual connection between the device and the airplane. This connection can be wired or wireless. It’s now possible to have a wireless access point that’s dedicated to the crew. A wireless connection will need to include security capabilities so users can prove their identity to the wireless network. Let’s not forget that security must also be practical for in-service use. A wired connection is generally seen as more secure, since there has to be physical access from the flight deck, which is considered a secure domain.

The second piece is the connection to the airplane systems. Many aircraft coming off the production line today have a network system already built in. This ties most of the avionics together. Boeing calls this the Onboard Network System, and it integrates airplane data connectivity, off-board communications and application hosting. Off-board communication protocols include ACARS, IP-based ground data links and in-flight data links. The latter is available either through air to ground or satellite networks. Future production aircraft will come with the ability to display operationally approved information (OAI), including several common EFB applications, on forward displays. Touch screens are under study for forward displays.

For airplanes already in service, it is a different story. Aircraft Interface Devices will probably be the more popular method to establish connection to airplane systems. It is possible to retrofit a complete onboard network system but it may be a lengthy and costly proposition. Typical Aircraft Interface Devices aren’t as capable as complete network systems because they’re usually not integrated with off-board communications.

The third piece is off-board communication systems on board the airplane. Many airlines have successfully installed internet connectivity onto the airplane for passenger use, but it typically can’t be accessed by flight and cabin crew for security reasons. There’s a debate right now whether this state of affairs will continue. Most security experts are recommending retention of physically separate systems for the crew. That means the need for a separate satellite communications receiver to get off-board connectivity for the flight crew.

Finally, link providers must be selected. Once the airborne components have been installed, the links need to be managed. For ground connectivity, all the air-to-ground communications systems will have some sort of ground requirement in terms of server installations to handle the various communications.

In summary, there are multiple options and there is not a simple ‘one size fits all’ solution. It’s worth asking advice on this.

DATA AND CONNECTIVITY
Now, let’s take a look at what specific data is needed by function and how that benefits the users.

Let’s look at access to documentation. By and large, connectivity is not seen as necessary because documents are usually available offline on the device. However, by adding connectivity, tail ID information becomes available. This enables smart filtering, meaning the pilot is spending less time looking for information. 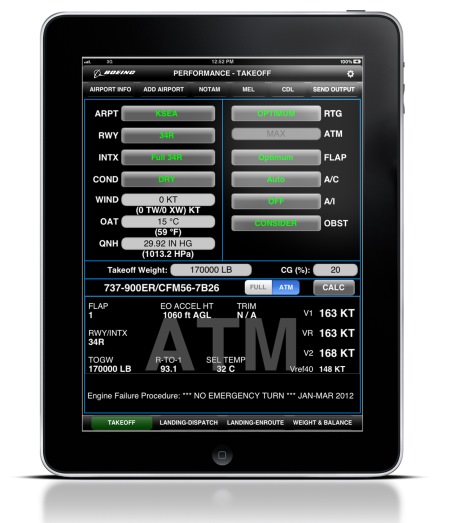 Next, let’s look at performance calculations. Pilots are typically doing some combination of take-off, landing, weight and balance calculations. The data needed for these calculations includes information about runways, environmental conditions (temperature, pressure) and a number of airplane settings. Once there is connectivity, you start to see some benefits. For example, auto-population of some of those inputs means the pilot doesn’t have to type them in. This saves time and improves accuracy. 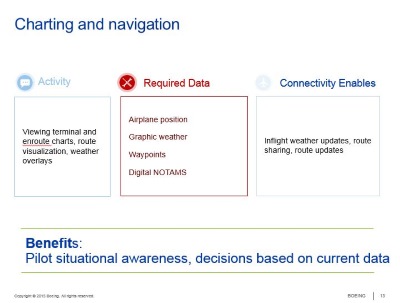 Charting and navigation. Connectivity enables real time position, route sharing and weather updates to benefit pilot situational awareness. It comes with the added benefit of making decisions based on more recent data than what is in the briefing package. We do need to bear in mind that there are still restrictions on showing the aircraft position while in-flight, which are subject to negotiations with the regulators. 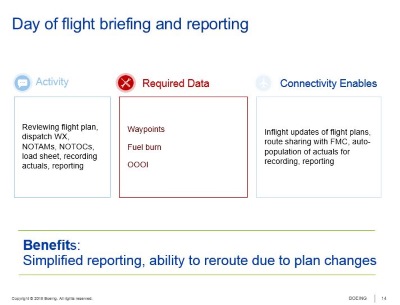 And, finally, up until recently pilots have typically used paper for day-of-flight briefing and reporting. The flight plan review, in fact, the whole day-of-flight briefing package that includes weather, NOTAMS, NOTOCS (notices to crew), the flight plan itself, load sheet, can now be loaded into an electronic flight folder application. In order to record actuals against plan, data required from the airplane includes waypoint information and fuel usage from the flight management computer. Connectivity will enable in-flight updates of flight plans as well as some updated weather information. This is probably the biggest benefit that most people see. At a recent Boeing-hosted flight operations symposium, airlines indicated that the flight briefing information is their number one priority when determining how to add in-flight connectivity. 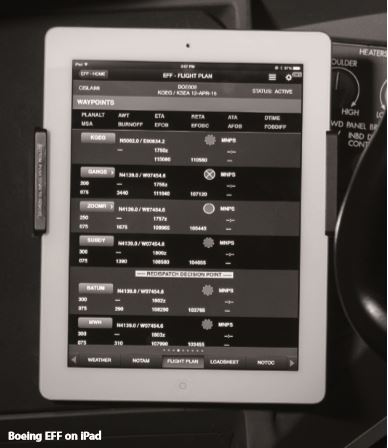 LOOKING TO THE FUTURE
So, how could a better connected EFB world look? To see the difference from today we’ll look at the same ‘day-of-flight’ activities that we considered in the previous article but this time with the major benefits when in-flight connectivity is activated. 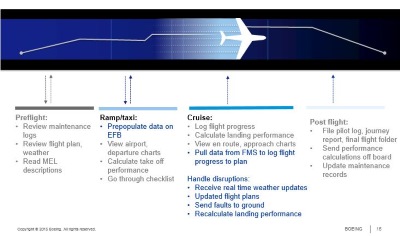 There are a couple of functions that will see significant additional benefits from in-flight connectivity. On the ramp and while taxiing, pre-populating the data on the EFB will save time for the pilots not having to do redundant data entry. In the cruise phase, the ability to pull data from the flight management system to log flight progress against the plan will automate a function that is currently often done manually. We’ve already implemented this on a class 3 EFB and it’s been a very popular solution, saving time for pilots and improving accuracy for the business. We’re just getting into that in the tablet space by using the link through the Onboard Network System to be able to pull that same data from the airplane. 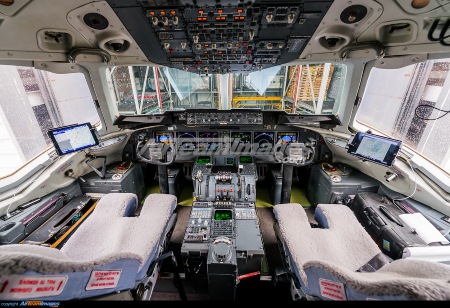 The big benefit in cruise will be seen in the handling of disruptions. Picture a major weather disturbance where a pilot needs to re-plan the flight. To be able to get that information earlier and proactively plan for, say, a revised destination is of significant benefit for airlines. Now an airline can avoid rescheduling flights and all the costs associated with that. The pilot will be able to edit a route in the EFB using a graphical interface and then send the data to the FMC and to ground: that done, he can redo calculations for landing, log observed faults, change arrival airport, etc. In-flight connectivity allows the changes that occur during the flight to be handled proactively.

Today’s connectivity lets us get weather data on the ground and share route information. As connectivity becomes available in-flight, it will be possible to get updated weather data in real time, including textual weather via ACARS and graphical weather via IP data link. We also see a trend for integration between apps to not only bring them together visually but also to really talk to each other and share information. The longer term future is less predictable but we already see some drivers today. ADS-B (Automatic Dependent Surveillance – Broadcast) has been on the horizon for quite a while. Then there are next generation initiatives such as AAtS (aircraft access to SWIM – system wide information management), SESAR (Single European Sky ATM –air traffic management – Research) requirements. Airplanes are going to need connectivity for all of these future things which, in turn, are drivers for the connectivity program today.

THE BUSINESS CASE FOR CONNECTIVITY
I hope that readers now understand more clearly how connectivity will enhance EFB capabilities and what will be needed to implement it. But the question remains, how to sell it to your board? Unfortunately, there’s no quick answer. And, of course, every airline has its own way to calculate benefits. Nevertheless, there is an approach that could leverage the benefits into a business case. 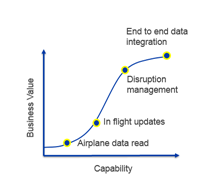 First of all, consider the quantifiable financial benefits. These are the ones that will have most sway over business leaders. Then there are the operational benefits. These are a harder to measure but are equally important: reduced pilot workload, time and other savings. As an example, Boeing’s Onboard Performance Tool is a pretty quantifiable application: it’s proven to save money on engine de-rates and maintenance costs. The added benefit with connectivity is a little harder to quantify, but airplane data read capability buys a little bit of benefit. With Boeing’s Electronic Flight Folder application – a briefing and reporting tool – benefits are quantifiable in terms of reduced paper. A Boeing customer calculated that this was going to save the airline $150k per tail per year. Each airline will need to come up with their own way of calculating that. As we saw previously, the real value of connectivity comes inflight. In-flight updates offer more business value and capability with better information on which pilots can base decisions. But disruption management and being able to proactively change flight plans are probably two of the biggest benefits of connectivity: again, it is not easy to measure but most airlines will have a formula for determining the cost of a delay or a cancelled flight. All that can be included in the business case.

Finally, the opportunity for end-to-end data integration promises enormous benefits which can probably be illustrated by examples from the airline’s current experience.

In summary, look to both the near and long-term when considering the benefits of EFB connectivity, define the business case and then implement the program. 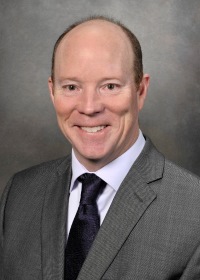 William (Bill) Vlases
Bill Vlases is a manager in the Electronic Flight Bag (EFB) Solutions team, where he oversees application development and support. He began his Boeing career in 1989 after receiving a master’s degree in aerospace engineering, starting as an astrodynamics engineer then leading a team testing navigation system software before going to work for a software company in Seattle. Bill rejoined Boeing in 2004 and in 2006 was an EFB Deployment Manager, helping airlines’ e-enabled strategies

Boeing Support and Services
Boeing provides world-class support to customers around the clock and around the globe. This support starts when a customer places an order and extends throughout the lifecycle of the airplane. The goal is to maximize the value of airplane fleets and operations, giving Boeing customers a competitive advantage in a challenging business. Commercial Aviation Services offers the industry’s most comprehensive portfolio of products, services and support, marketed as Boeing Support and Services.