Column: The World according to IT and me.. Absolutely Phabulous

Column: The World according to IT and me.. Absolutely Phabulous

I’ve occasionally spoken about how science fiction has affected or should affect the future. For decades technologists have striven to miniaturize mobile technology; but a few years back a trend became apparent where mobile phones were getting bigger. Of course, the first smart phones required a larger form factor than their predecessors, but each new generation of phones saw the devices get larger and larger. I wrote about the phenomenon back in the August/September 2013 edition of Aircraft IT Operations.

These larger phones (or smaller tablets) have become commonly known as ‘phablets’. Is it a phone? Is it a tablet? If you’re not sure, it must be a phablet. Get it? The Phablet has become an interesting form factor for a number of Flight Operations use cases and indeed there has been widespread adoption amongst airlines, especially for cabin crew. Of late there have been some interesting studies and statistics to suggest the phablet is not just a passing trend, but will be a permanent addition to the range of mobile form factors.

A recent report by Flurry, a subsidiary of Yahoo, on the state of the mobile market in 2015 suggested that although mobile phone usage is, by almost every measure, still on the rise, the growth of, use and adoption of phablets is outstripping every other device type. The following graph is perhaps the most telling: 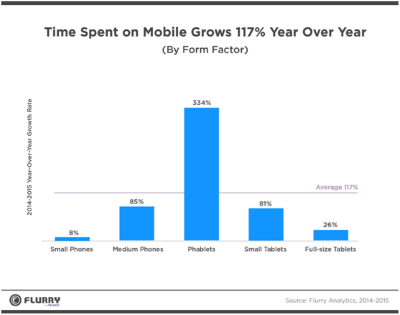 This has significant implications for device OEMs and media providers, but what does it mean for our industry? As I said back in 2013, I can’t foresee a scenario where vendors will need to develop EFB apps for the phablet form factor, but what is becoming apparent is that companion apps and niche apps will find their natural home on phablet devices due to their ubiquity and consumer preference for the form factor. Even device manufacturers who normally only focus on hardware for business are getting in on the act: Panasonic recently released the ToughPad FZ-E1 (Windows) and FZ-X1 (Android) ruggedized 5 inch tablets. Even the latest generation consumer devices such as the Samsung Galaxy S7 and what will presumably be announced as the iPhone 7 have significantly greater enterprise-ready capabilities than legacy versions of the same range of devices. 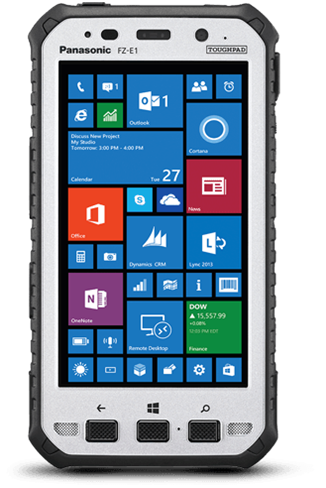 I can foresee the demand for simple, connected, phablet-optimized apps to acquire data and then feed it into connected EFBs or electronic logbooks. As well as occurrence reports, passenger manifest reports and other forms to which many cabin services teams already have access on their phablets, we’ll soon be seeing cabin defect reports, fuel uplift and de-icing reports being filled in on a phablet and synced with the flight crew’s devices. Even class 2 or 3 EFBs which remain onboard the aircraft may have the capability to communicate with a pilot’s own phablet allowing them the ability to pre-plan their flight and sync data and content between devices.

The suggestion from the aforementioned study data is that phablets are definitely not a fad. Software vendors and technologists need to not only be prepared for a growth in demand for phablet-optimized solutions, but also need to be actively working on them right now… Or at least that’s how it seems in the world according to IT… & Me!


 Paul is a technology specialist
who has been working in aviation IT since 1998 with expertise in
software design and mobility, having worked on apps used by pilots and
engineers. In the adoption of emerging technology in aerospace,
particularly mobility, Paul is a visionary and geek. He joined the
TechSight/X team in 2013 where he serves as a global product manager
spearheading flight operations, engineering services and mobile
solutions.