Case Study: How to Implement fuel savings linked to EFB

Fuel expenses have always represented a large proportion of total expenditure for an airline. In the past year, the price trend of crude oil and fuel prices associated with it demonstrated the need for airlines worldwide to act sustainably. And by ‘acting’, we understand, in this context, we mean finding fuel saving measures.

Even though the low hanging fruits have already been harvested, there remains a possible measure with high savings potential that could be implemented in the regional airlines sector. That measure is the implementation of a new flight procedure on the basis of variable airspeeds which will entail turning away from the previous practice of a fixed airspeed, regardless of external parameters. Therefore it is necessary to be able to calculate and identify a speed that generates the lowest costs within the given time slot (block flying time) with due regard to a scheduled time of arrival.

To achieve this, a company-specific cost index (CI) can be applied. This so called CI represents the ratio between event-related and flight time-dependent costs, and the fuel price.

While the CI functionality is part of the standard equipment of every modern flight management system on Airbus and Boeing aircraft, it has not yet been established in the cockpits of regional aircraft. The question as to why has to be answered by the manufacturers of those aircraft in light of a changing sector. Regional air traffic is no longer a 20 minutes flight with a turboprop. All over the world, increasing numbers of regional jets are pushing forward into the medium haul range with aircraft of up to, and sometimes even more than, 100 passenger seats. The word ‘regional’ does not so much refer to the geographic operation radius, but rather to the size of the aircraft fuselage.

The savings potentials, available with a change from fixed speeds to variable cost index based speeds are enormous. Fuel experts at IATA describe the savings potential in their ‘IATA Fuel Action Plan, Guidance material and best practices for fuel and environmental management’ as follows: “CI optimization of planned speeds will yield savings from 2 to 3 per cent and in some cases, as much as 10% when a flight is restricted to a low altitude or in unusually strong winds.”

The following calculation outlines the size of the savings potential:

Fuel consumption of the Canadair and Embraer fleet of Lufthansa CityLine amounted to 195,000 tons of kerosene in 2010. A supposed fuel saving of 3% leads to reduction in use of more than 5,800 tons of Kerosene. Furthermore a supposed fuel price of euro/ton 744 would lead to a savings potential of more than 4.3 million euro and reduced emission of 18,400 tons of CO2.

In order to use the cost index effectively for the fleet of Lufthansa CityLine, a cost index operations optimization software was developed by PACE, a Berlin based company for aerospace engineering and information technology.

Supporting the strategic flight planning process and on-board tactical economic decisions, Pacelab CI OPS significantly reduces fuel consumption and the emission of CO2 and other pollutants. Compared to constant Mach speeds, CI operations reduce fuel burn and harmful emissions by at least 2%, and even up to 10% in adverse conditions.

Until now the flight planning system used fixed published speed schedules and was not capable of calculating a CI based flight plan due to the missing respective Time/Fuel/Distance data. Pacelab CI OPS enhances existing flight planning systems with supplementary CI performance data for the climb, cruise and descent flight phases.

As well as calculating the optimum flight plan, it also allows on board tactical economic decisions in response to in-flight changes such as delay or early arrival, ATC cleared unplanned flight level or ATC requested speed change. Flight crews are able to recalculate and update planned trajectories whenever there are deviations from the Operational Flight Plan (OFP).

Cost index operation is based on a two-stage optimization approach: strategic planning, made in advance of the flight and tactical planning, for in-flight corrections to the flight plan.

Strategic planning in the context of cost index operations means the calculation and creation of the OFP. This forms the basis for the planned flight and further tactical optimizations. Tactical planning follows strategic planning. It allows for continuous checking and optimization during flight. The crew is then in a position of being able to react to any unpredicted changes during the flight. The tool for tactical planning is the Pacelab CI OPS software.

The following example indicates the necessity of tactical planning. The crew receives and OFP from A to B which contains a taxi-out time of 10 minutes and a taxi-in time of six minutes with a block time of 100 minutes.

According to the previously optimized OFP, the flight time is 84 minutes. Due to a high traffic density in A the 10 minute taxi time becomes 18 minutes before line-up. The time window for the flight is therefore reduced by eight minutes – only 76 minutes are available. How can the trajectories be changed in order to achieve an optimum ratio between flight time and fuel burn, i.e. cost? The main options are changing the climb speed, the (optimum) flight level or the cruise speed

Discounting external influences such as wind, it is generally possible to say that flights at high altitudes use less fuel than those at low altitudes. Normally, only the cruise segment is optimized. However, as part of a total optimization, this is not enough. In short-range flights, the horizontal segment is often only a small part of the overall flight profile.

The figure above shows that a high indicated airspeed in the climb segment (i.e. higher cost index) leads to a gentler climb angle. The cruise altitude is therefore reached later. This situation is reversed for a low cost index (CI=0) or a low speed. The extra power of the engines results in a high climb angle, so that the cruise altitude is reached earlier. Both cases have implications for the subsequent cruise segment and the overall flight time.

In the case of the descent segment, a higher cost index (higher flight speed) leads to a steeper angle of descent, whereas a lower cost index (slower flight speed) allows for a gentler angle of descent. Like the climb segment, there are implications to the cruise segment. A steep and short descent results in a longer cruise segment at the optimum altitude.

It is important to note that for each parameter set comprised of take-off weight (TOW), CI, distance and wind there is a particular combination of optimum altitude and optimum speed triple, where ‘speed triple’ denotes a particular combination of climb, cruise and descent speed values. The figure below shows such a speed triple for an example parameter set with an altitude restriction (Alt Cap) on FL340 as a point in three-dimensional space.

Each time the parameters are changed, the position of the point changes in this space, making rule of thumb estimates impossible. 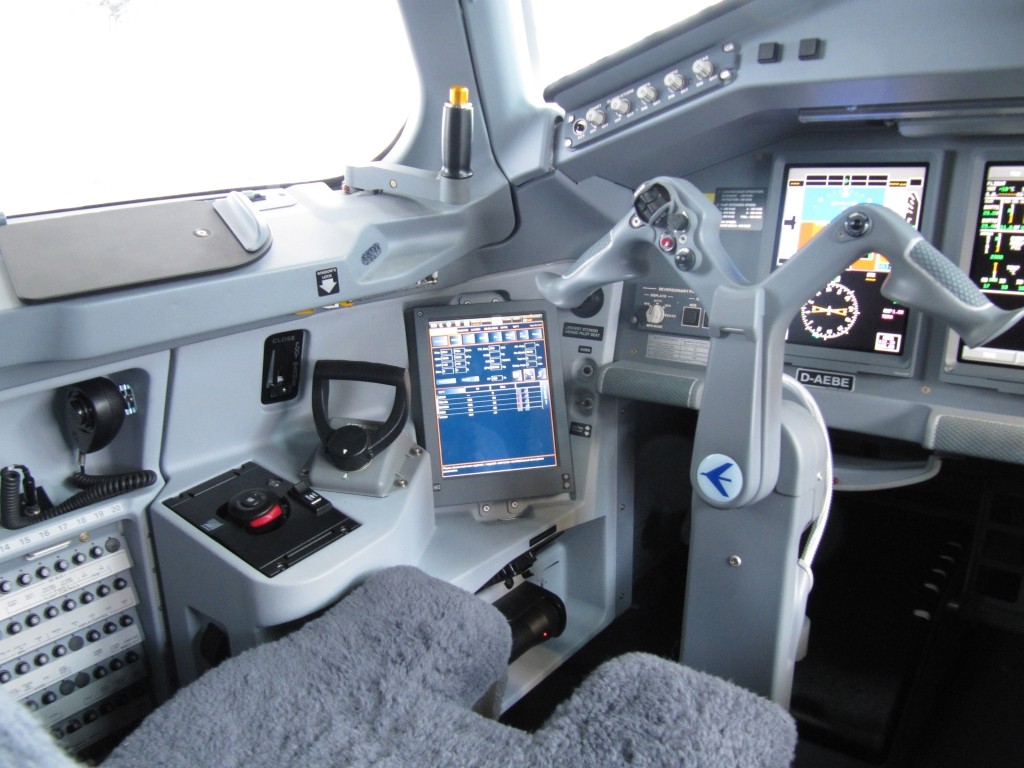 CI OPS use in cockpit

Lufthansa CityLine uses so called Class 2 EFB systems in the cockpits of their Canadair and Embraer Jets. Class 2 EFB systems are generally commercial-off-the-shelf (COTS) based computer systems used for aircraft operations. They are portable and connected to aircraft power through a certified power source. The Class 2 EFB system is considered as a controlled personal electronic device (PED) and is connected to an aircraft mounting device during normal operations. Moreover connectivity to Avionics is possible, but the systems require airworthiness approval.

Before flight, the Pacelab CI OPS must be initialized with basic flight mission and weather data. These data can be supplied using an eOFP or by manually entering the required data.

After having entered all data necessary for calculating the optimum trajectory, the ‘Calculate’ button can be used for a first optimum trajectory be calculated. The trajectories calculated in PREP are not time constrained and therefore correspond to the most economical trajectory with regard to the total costs (time and fuel).

In the results window the (non-time constrained) trajectory for even and odd flight levels together with additional information about fuel and total cost are displayed in the Profile View: 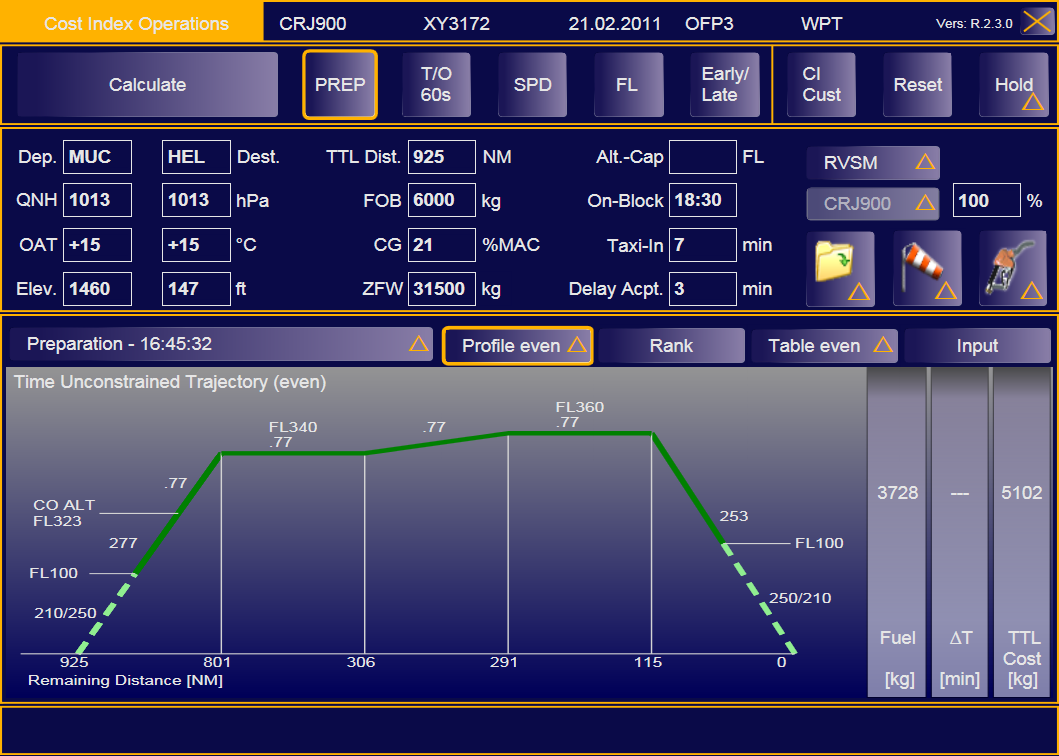 After line-up clearance has been obtained and take-off is expected to be initiated in about 60 seconds, the pilot can click the ‘T/O 60s’ Button on the action toolbar to calculate the optimum trajectory considering the actual take-off time. CI OPS takes the system time and adds 60 seconds to estimate the take-off time. Based on this take-off time, the application calculates the trajectory and displays the results.

By comparing the take-off time with the on-block time, delays or early-in-time-scenarios (for example, caused by slot or taxi-out delay or shorter taxi-out times) are included in the time dependent trajectory. The time window for the flight is thus larger or smaller.

In case of a delay, Pacelab CI OPS will modify the CI up to a maximum allowable value. When this value is reached, a delay will be accepted. In case of being ahead of time, the trajectory for the minimum CI will be calculated.

During the flight, ATC might advise you to change speed in cruise. This is frequently caused by the staggering of aircraft ahead or behind.

Following the fact that there is a specific optimum speed, the ‘Speed’ use case is available. In addition to the trajectory for maintaining the current FL and applying the required speed, trajectories for four additional flight levels (two above, two below) and the appropriate ECON speeds will be calculated.

Delayed or too early in cruise

Because of various external effects, it is often the case during a flight that the pilots realize they will arrive too early (or too late) at the destination. The reasons for this might be a stronger wind component or a short cut by ATC that was not known or included during the planning phase. For example: a crew receives several short cuts from ATC during the flight, shortening the total flight time by six minutes. This additional time could be used to reduce speed, if the arrival delay is not a factor. By using Pacelab CI OPS, the pilot can quickly check, if applying a new speed is beneficial or not. The software would come up with a recalculated speed suggestion, taking the new parameters in account.

One of the most frequent cases is a deviation in the real allocated flight level from the originally planned one. For example: during climb phase, ATC tells the flight crew to maintain an altitude below or even above that planned. The question is whether the ECON speed calculated for the original FL is still the optimum and if there is an OPS or fuel restriction at the target FL. For example, a higher head wind in a lower FL can lead to a higher recommended ECON speed. As in the other cases, the pilot can quickly determine the optimum speed for the new situation.

The previously mentioned examples show, that Pacelab CI OPS is a very easy to use and powerful tool, putting the pilot in the position of being able to make informed decisions on a knowledge-based trajectory analysis.