Case Study: Great service whenever, wherever, whatever, however

Great service whenever, wherever, whatever, however

In light of the intense competition that is a hallmark of the aviation industry, a medium sized carrier has to place its hope for positive brand differentiation on delivering a superior service. Recognising and acting on this key principle helped Thai Airways International (THAI) to lift its business above the competition and into the forefront of service delivery among airlines worldwide. And the vehicle for this achievement was the airline’s C/A (cabin attendant) Pre-flight system. In this article, I’d like to explain about the C/A Pre-flight system project, how it applied technology to support better delivery of great service and how it was introduced to the business.

The C/A Pre-flight system was initially introduced to the industry at the 1st Annual Airline and Aerospace MRO & Operations IT Conference – Asia/Pacific – Bangkok in October 2009. On the same day it was also submitted for the Thailand ICT Award (TICTA) 2009 where it won first place in the Tourism and Hospitality Category. From that point, it went on to win the Asia Pacific ICT Alliances Award (APICTA) 2009 in Melbourne, Australia. The latest accolade awarded to this system was the State Enterprise Innovation award from the Government of Thailand in 2011. 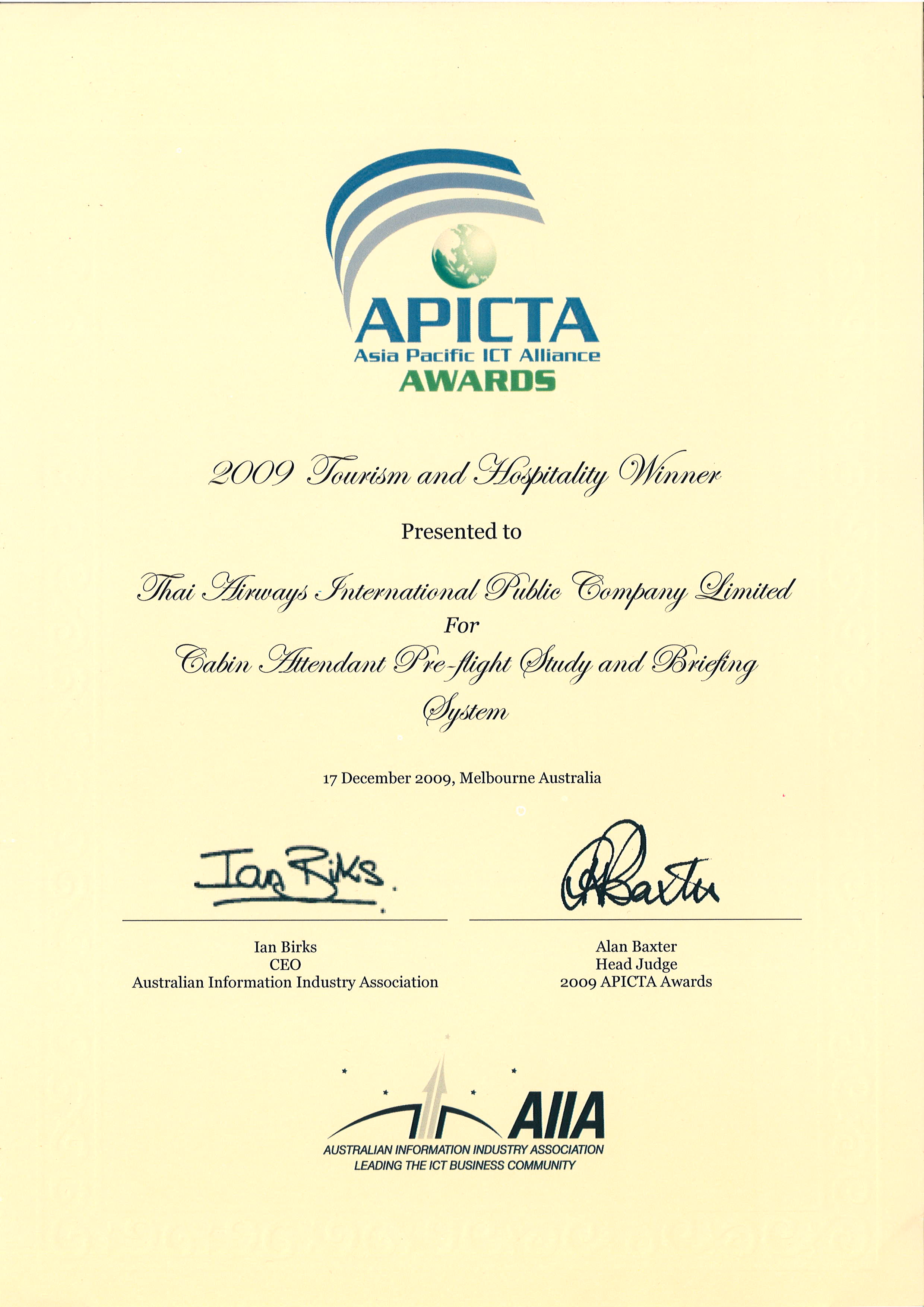 Airline businesses operate in a demanding market where most operators deploy high-tech and innovative solutions in an effort to attract customers; offering new generation aircraft, state of the art in-flight entertainment, luxurious 180-degree seats/beds and other attractive incentives. However, these technologies and features demand significant investment from airlines.

While there may be limited scope for airlines with less financial weight to invest in modern technologies, some remain determined to continue to develop by leveraging innovation and in-house expertise to compete. THAI is one of those airlines that has always concentrated on its unique qualities: the essence of Thai culture and hospitality is a theme running right through each journey. Taking care of every detail in the services available on board with attention to passenger comfort is something that flows naturally from the Thai culture, and the warm and gracious Thai hospitality of the cabin crew.

Cabin crews always want to deliver high quality service. So, building on this culture by providing a system with unlimited content and high security at anytime, anywhere, on any devices, the airline has ensured that crew are happy, able to work efficiently and effectively, and to be proud of the service they deliver. And customers can be delighted by in-flight services offered with a ‘THAI Smile.’

Now, crew can always access the technology they need to support service delivery. The C/A Pre-flight system created a new competitive edge for THAI, enabling remote pre-flight preparation for incoming flights in any competitor hub and supporting a competitive industry position. Development of the system has of itself been a major project for the airline. 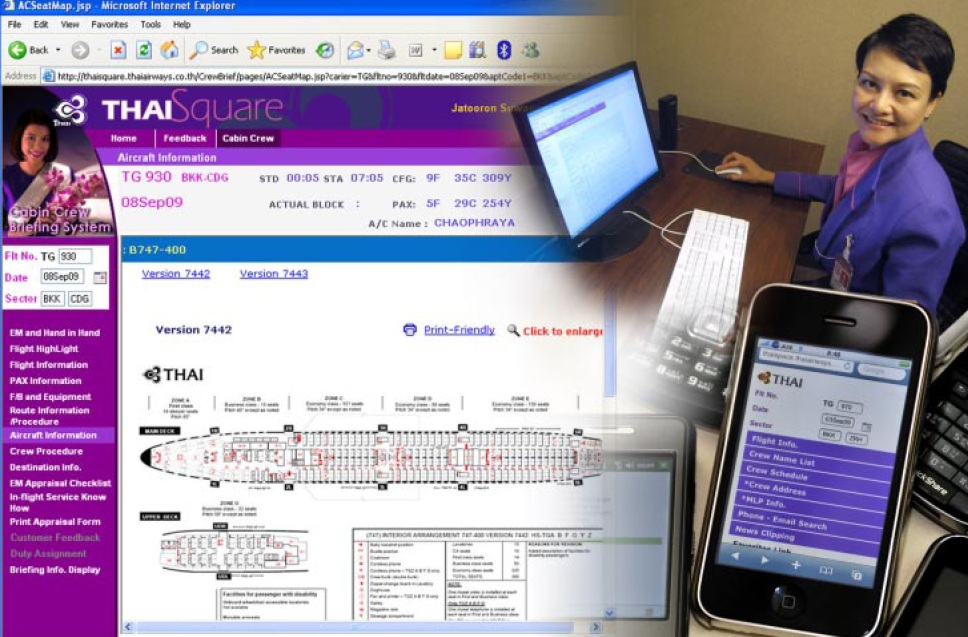 First devised and developed in 2004 by the in-house team for the airline’s new hub at Suvarnabhumi Airport, the C/A Pre-flight system was designed to help THAI crews prepare for their next flight using advanced secured authentication

and internet access (SSL VPN[1] with OTP[2] Token) from all company and personal devices, including all types of mobile phone. Today the system offers crews a web-based application with Enterprise Application Integration (EAI) technology for accessing required content from various systems or applications in the company, such as Z/OS, TPF and distributed systems, and other external systems.

Features of the system 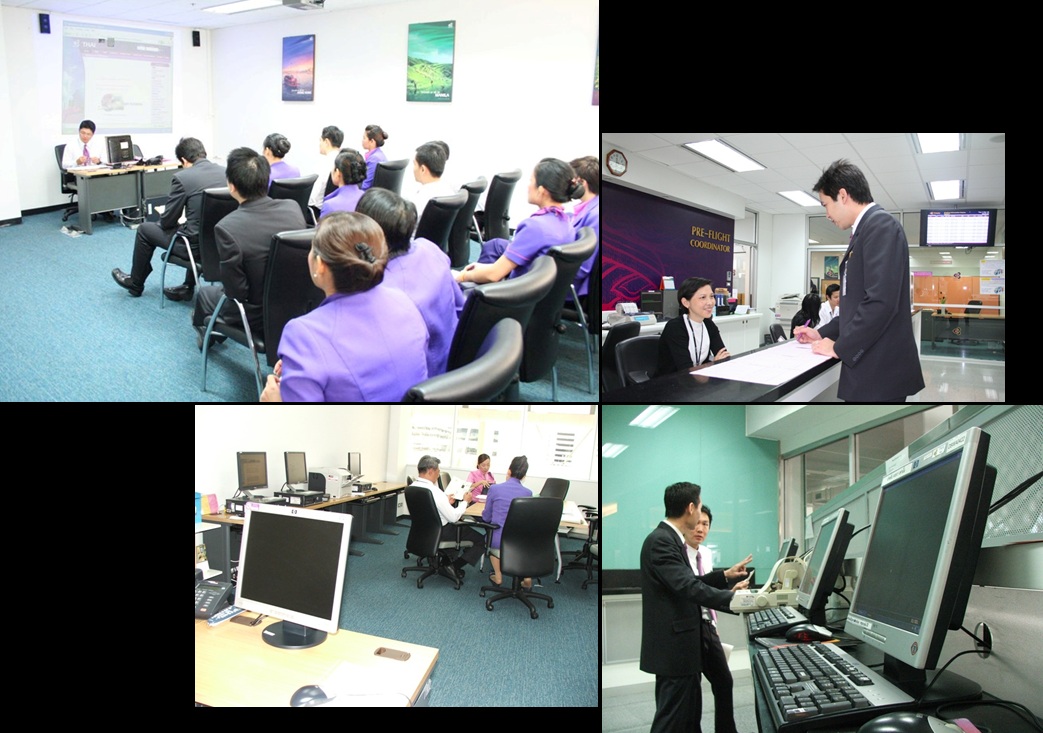 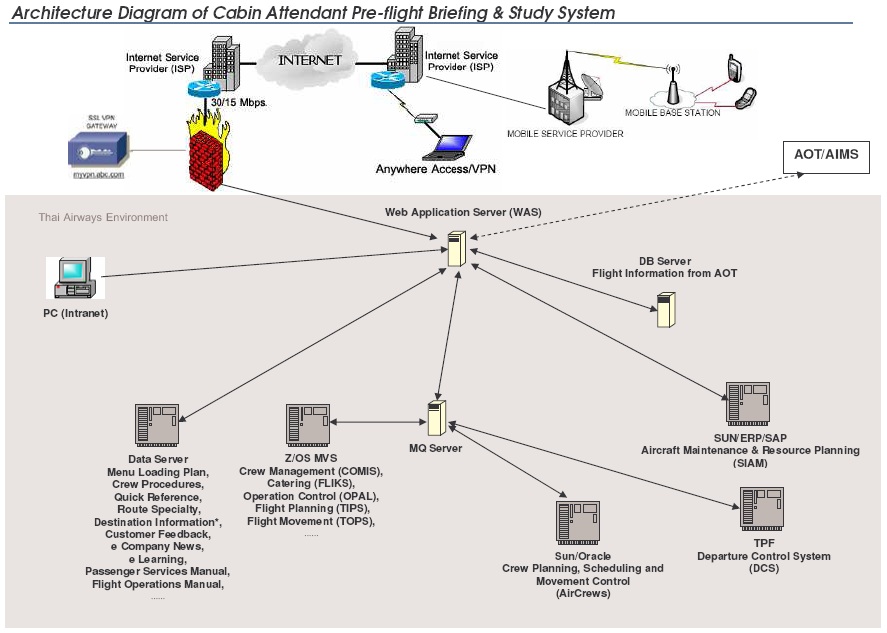 Airlines generally provide tools and devices for crew regardless of personal preference. However, that requires a large initial investment and high running costs to maintain the equipment. Also, some crew may refuse the company device as they do not want responsibility for it. But if they do accept, they will most likely carry their corporate device for corporate use as well as a personal device for personal use.

The system that THAI has adopted allows crew members to use their own devices on any platform. In other words, crew can get access to and use many applications within the system on their desktop computers, notebooks, tablets, smart mobile phones, and even basic mobile phones.

Regardless of whether there is or is not local internet access, crew members can get the latest information wherever they are through SMS query and TG SIM[3], which are both available in addition to internet access.

Usually, crew are well prepared when flying from their home base and are able to gather all necessary information regarding passenger services and operations. However, this is not the case for in-bound flights away from base where there is limited information access and authentication requirement. The system creates a new competitive edge for THAI by supporting remote pre-flight preparation for incoming flights, in any hub.

Our crews span a range of ages, IT skills and preferences and, in the past, crew have sometimes been resistant to new corporate initiatives. To overcome this, a number of strategies have been implemented as follows.

THAI is the first airline to have devised Cabin Attendant Pre-flight Study and Briefing System software. In summary, the software has introduced an on-line real time system delivering pre-flight information for crew members using any platform and on any personal device (including smart and basic mobile phones) via highly-secure internet and SMS. A key factor in the project’s success has been the active participation of the cabin crew at every step of the system’s development.  During the four years that the project has run, users, programmers and project managers have all worked very closely together to realise the dream they shared from day one.