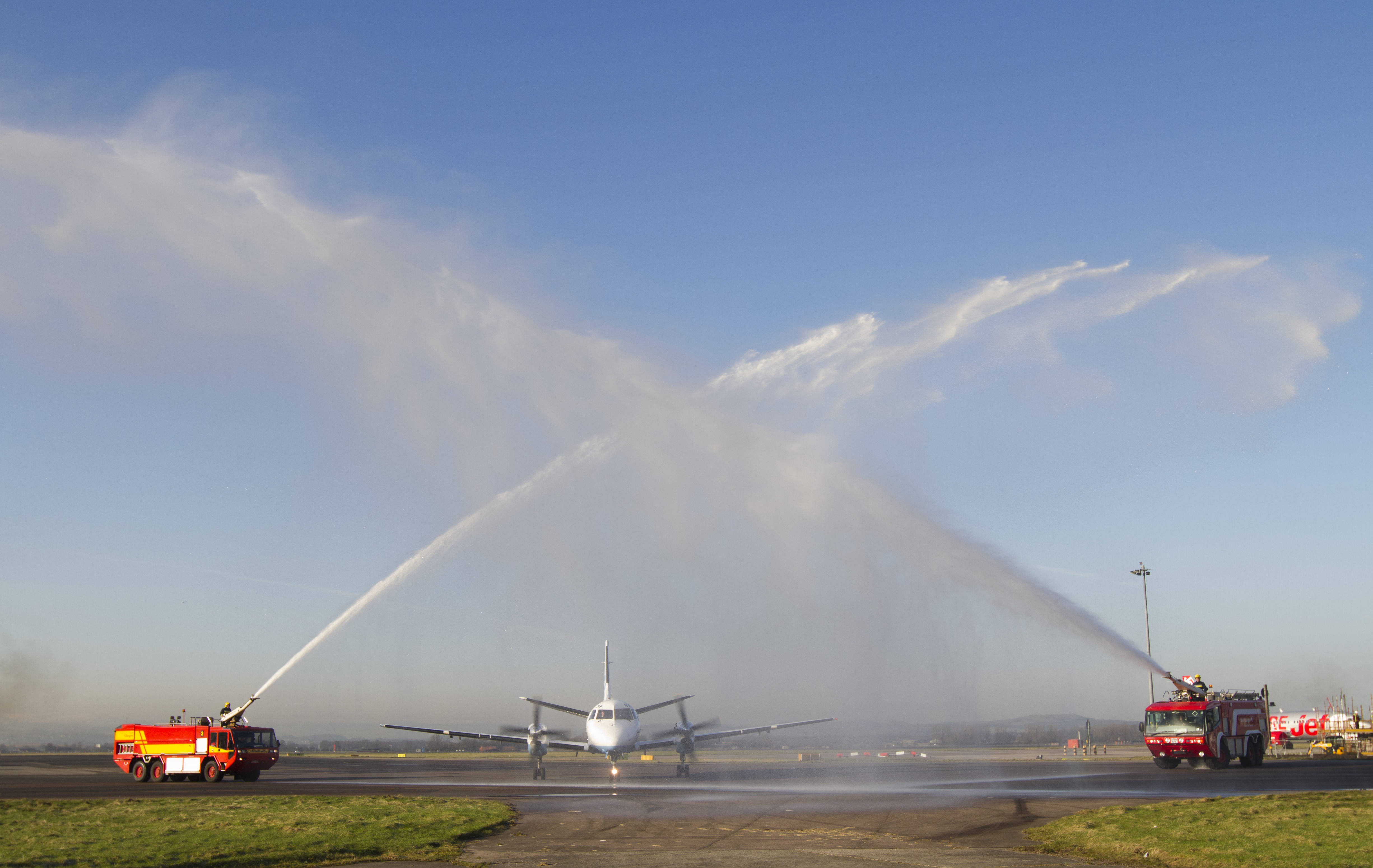 A proud tradition and a challenging environment

Founded in 1962, Loganair is the United Kingdom’s oldest continuously operating airline, proudly serving regional routes in its native Scotland and from the U.K.  It boasts the world’s shortest scheduled air route from Westray to Papa Westray in the Orkney Islands and also operates into the famous beach runway at Barra, where the timetable is constructed according to the local tide table.

Notwithstanding these noteworthy claims to fame, at its core Loganair operates a high-intensity scheduled passenger service across relatively short sectors and serving both business and local communities. The airline’s network extends to 28 airports with over 130 sectors flown daily on an average stage of 48 minutes flight time. In addition to the passenger operations, flown under a FlyBe franchise, code shares are flown with British Airways, corporate and private aircraft charters; dedicated mail and freight services are also operated.

These diverse operations are frequently flown in challenging weather conditions, requiring very tight control of line maintenance operations and technical compliance in order to ensure the highest technical reliability and safety standards. Many of Loganair’s line stations are in relatively remote locations.

Having used Commsoft’s OASES computerised maintenance planning and control system for around 20 years, in late 2009 we upgraded to the latest Oracle based version of OASES, at the same time embarking on a journey to integrate new Line Maintenance Control (LMC) functionality into workflows and processes. Critical to this was the need to strike a balance between rapid turnaround performance, predictive trouble shooting and rigid technical compliance.

We currently manage a fleet of 16 Saab 340’s, 2 DHC6 Twin Otters and 2 BN2 Islanders on the OASES system which copes extremely well. We manage all our records within the system which allows historical reliability, component installation, maintenance forecasting, work pack generation and pre-loads to be easily managed. In addition our stock is controlled within OASES, which allows us to REQ (requisition) the required parts from any of our line stations which OASES manages.

We were fleet leaders at getting the current OASES LMC system working and have done so for the last couple of years so that we are now in a position where the complete fleets records (Tech Logs/Base Checks) are in the system for each aircraft tail by 12.00 hours each day. This allows the LMC and Engineering Support teams to react to almost live data. Links to an EFB (Electronic Flight Bag) could be next, but we believe that EFB technology needs to catch up first, especially in the areas of ease and speed of use.

Loganair manages its flight crew rostering and commercial operations flying through a RM Rocade operations system. This has been in place for many years and suits our needs. We have been running a live link between OASES and Rocade since January 2010, which allows us to pull live flight feed every 15 minutes from ROC into OASES facilitating ‘live’ forecasts to be in place for the LMC/Planning teams. The flight data gets verified at the beginning of each day, as the tech logs come through. 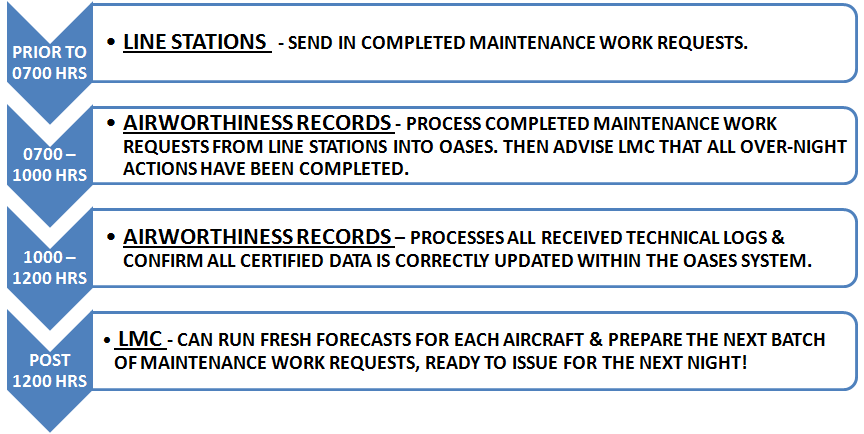 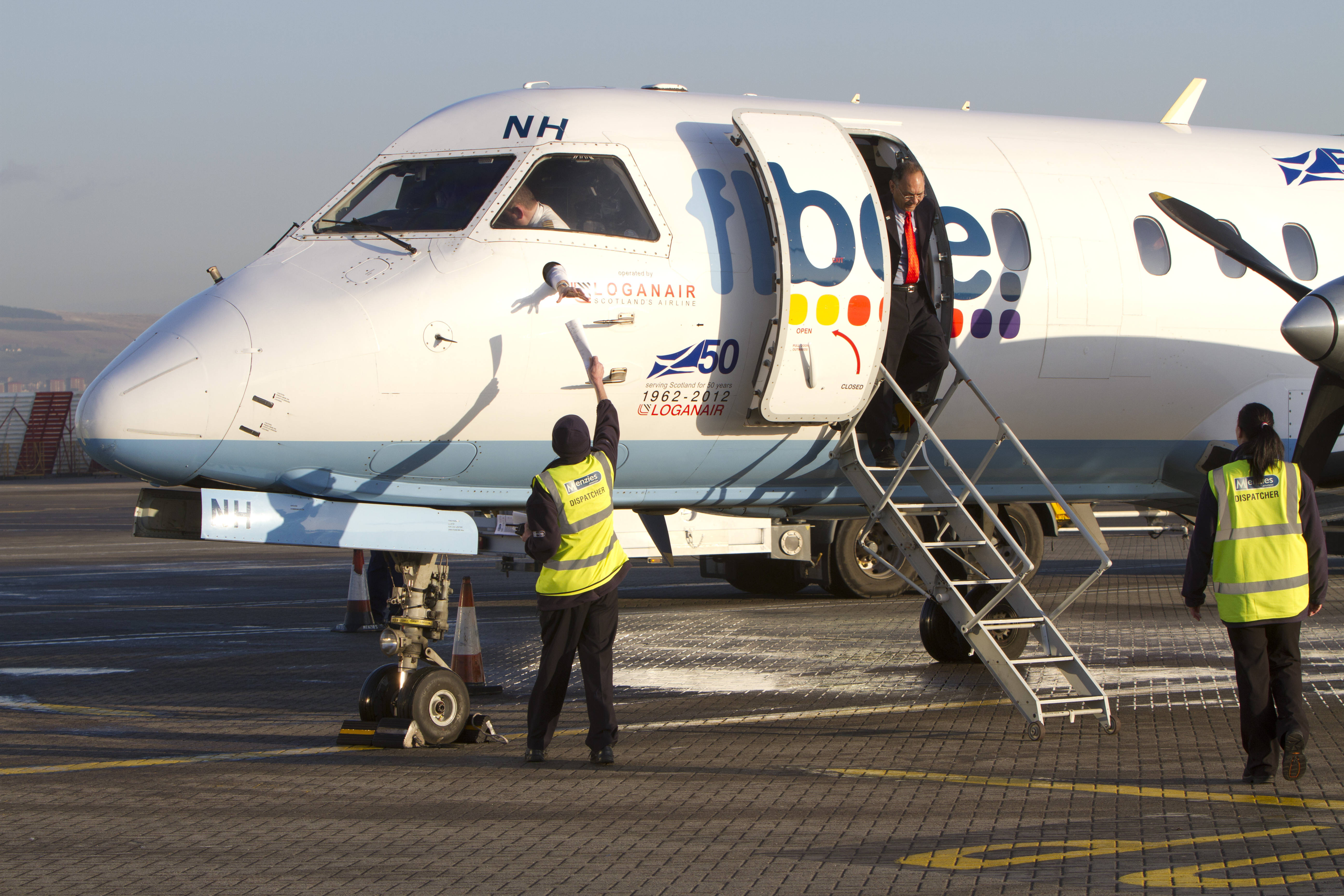 We also use a system called AirVault operating on a cloud from USA based servers and currently have all of our component batch records stored within these servers. OASES has a link between each system, so we can get instant access to any batch record files. As a next step we are planning to soon start working with base packs.

Commsoft first proposed its integrated OASES LMC module in mid-2009. After initial presentations and demonstrations, at Loganair we felt that it could meet our needs to integrate disparate systems within a ‘one stop shop’ philosophy for all maintenance control. It was also apparent that some developments would be required to be able to achieve key efficiencies, speed and controls, while also being able to ‘sell’ the system to key stakeholders in the user community at Loganair.

Our then existing LMC system was very popular with the line engineers and LMC team and had served us well in extensive use for many years: so why change? The system was MS (Microsoft) Access based but operated as a standalone independent system. All data was manually loaded and all MEL (minimum equipment list) data was in hard copy format. Using OASES as our main maintenance control system meant that there were no interfaces between the two systems and both greater control and compliance could be achieved by opting for the LMC module within OASES linked to the operational data feed from Rocade. Errors from duplication of data could be eliminated and other efficiencies could result from the move as would greater team cohesion, focus and understanding. On top of this, our existing MS Access based system was no longer supported.

How it was done

Having opted for the LMC module on a trial basis, in September of 2009 Commsoft gave initial managers’ user training in the then configured LMC module. This allowed us to begin to formulate our trial evaluation plans and to test work and process flows between departments in Loganair. The advent, in January 2010, of the test RM Rocade link to OASES further facilitated this process. This showed that some refinement was required in the automatic data refresh cycle between the two systems and it also highlighted some of the internal challenges in deciding which department had authority over what aspect of engineering control between line engineers and airworthiness records staff. Both sides were passionate in defending key aspects of control from their own perspectives, all leading to a final balanced conclusion. Comparisons of existing processes to proposed streamlined processes within OASES were conducted in parallel. These would suggest refinements in OASES, especially for ease of line engineers’ use, and would all ultimately inform the live roll out plans. It also highlighted a requirement for developments to the Maintenance Work Request (MWR) format in order to eliminate the need for data to be entered twice. 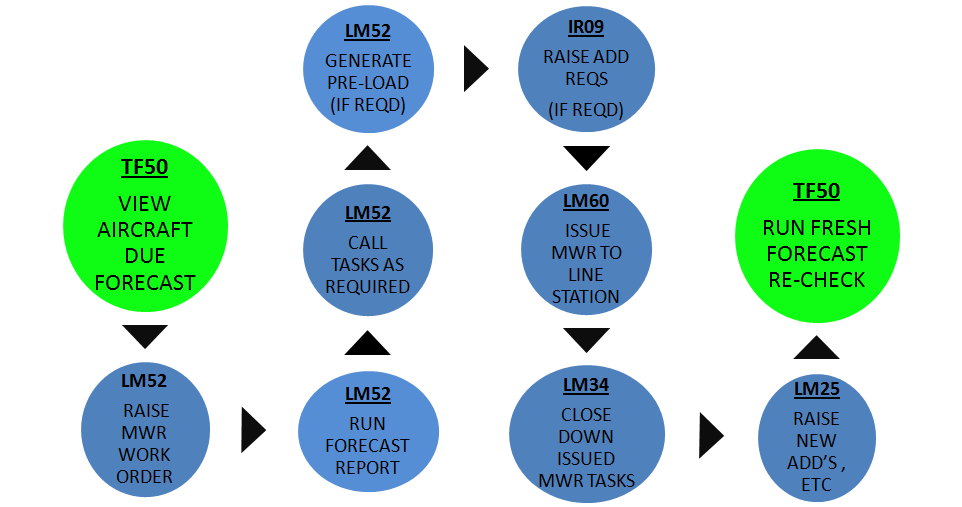 THE ABOVE FLOW CHART SHOWS THE ASSESSMENT OF THE FUTURE DUE TASKS,  ALLOCATING THE TASK TO A WORK ORDER, RAISING THE PRE-LOAD, ISSUING THE MWR TO THE LINE, RETURN OF THE COMPLETED MWR, THEN THE CLOSE DOWN & RE-RUN OF A FRESH MAINTENANCE FORECAST.

THE SLIDES THAT FOLLOW SHOW SCREEN SHOTS & NOTES TO SUPPORT THE ABOVE.

A key element in this project was to form an internal team and, with Commsoft’s application development team, to develop a working specification in which closed and outstanding actions would be clearly listed and allocated target dates. Particular emphasis was placed on full transparency of the capabilities of the existing LMC system and associated processes with a view to easing the operational transition, while still ensuring better control through integration.

At Loganair, we conducted our own in-house training during June 2010 to support the accelerated evaluation. This obviously brought its own workload challenges which were exacerbated by the challenging conditions at the time when volcanic ash was threatening our airspace and operations. With fresh evaluation came new proposals for tweaks and modifications to the OASES system. In total, around 35 detailed modifications were requested and these were prioritised with a view to achieving an initial ‘go live’. Of these requirements, twelve were deemed as being critical to initial operation; others were functional fixes while the balance were future enhancements, requiring some initial process workarounds. With Commsoft’s progressive delivery model, enhancements were fed into the system and evaluated by the team.

In order to achieve complete operational ‘buy in’ from all stakeholders, some key areas needed to be addressed. Key elements in line diagnosis are the observational notes that constitute a LMC diary. These give important clues as to impending reliability issues. It was therefore critical to achieve a marriage of certified techlog entries with non-certified diary observations and balance these in internal processes and reporting. Considerable effort was expended in designing the input and control screens within OASES and refining outputs in forecasts and reports. RDI (remote defect indicator) improvements with the need to display open RDIs automatically in forecasts for review and MWR (maintenance work request) call up against each aircraft were identified and are under development. Other changes were proposed to MEL (minimum equipment list) display formats and associated presentation and control of ADDs (automatic document distributions). 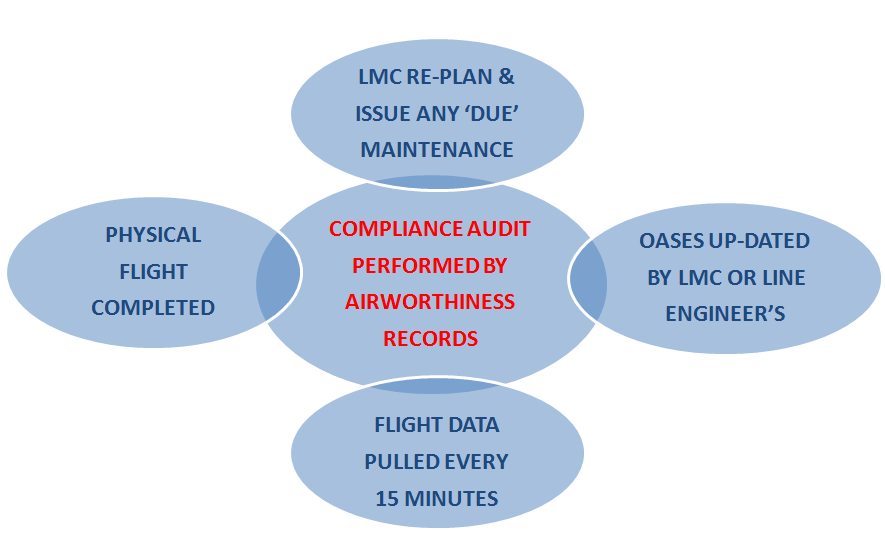 Whilst OASES has simple, intuitive design and on-line help text, it became clear that this project required a comprehensive but clear process based training manual, specifically designed to aid the launch of the LMC project across our diverse organisation. This would allow every individual to see the relevance to the overall process of each data entry format, form, report and screen. Until this time, as a result of daily work commitment conflicts, there had been a lack of OASES process knowledge in ‘front end’ departments. Training staff over many shifts would need to be carefully planned. It was also clear that key decisions needed to be made on data/number entry standards with key ownership by each department as to the data accuracy, and with final data control and amendment upon receipt of the tech log.

By mid-July we started a month long LMC trial to utilise the OASES functions and provide feedback. This was critical to achieving a final buy in and to propose changes that would make for easier use in the difficult field environment. Further changes were suggested to Commsoft, a process that continues even today in the light of operational experience.

By September all was in place for a final push to go to a live fleet trial. After two days of final management focus, we drove ahead and within three days had managed to push 18 aircraft into a live trial with automatic data feed from RM Rocade. LMC and CAMO (Continuing Airworthiness Management Organisation) control processes were finally tested by early October 2010 and, by mid-November, seven day cover was provided in Airworthiness Records to process the MWRs and raise any deferred defects raised on each night stopping aircraft. This enabled our LMCs to concentrate on the fleet serviceability.

This whole OASES LMC launch process highlighted the need for close harmony and planning with the need for responsiveness to the specific demands of the user community to achieve a committed launch. Loganair drove this but Commsoft had to respond with suitable system enhancements. From a management perspective, the paramount need for rigid technical compliance was enforced at each stage and required each progression in the launch to be carefully and sensitively tested before a final push, driving the line on our processes. This was (and is) in every sense a journey.

By early 2011, the OASES LMC system was showing the benefits we desired and full live deployment was achieved by May 2011. Of course, many new tweaks and enhancements can be made and have been requested. Future enhancements include greater alerting of parts movements, maintenance location moves, exceedances and task call up clashes plus further digital links with ‘dirty fingerprints’ source evidence.

As Craig Stewart, our Head of Line Maintenance will attest, we are now seeing much better repetitive defect alerting, significant efficiencies from an integrated automated data feed and freeing of resources, offering greater concentration on driving the line.