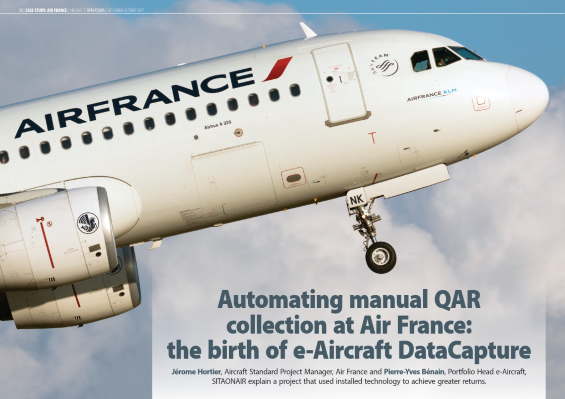 Jérome Hortier, Aircraft Standard Project Manager, Air France and Pierre-Yves Bénain, Portfolio Head e-Aircraft, SITAONAIR explain a project that used installed technology to achieve greater returns
In this article we want to share with readers a project by Air France and SITAONAIR to automate QAR collection, which led to the birth of SITAONAIR’s new e-Aircraft® DataCapture solution. The project started in 2014 when Air France contacted SITAONAIR about e-enabling their fleets, and, especially in this case, to help with downloading the QAR (Quick Access Recorder) and vQAR (virtual QAR) on an existing fleet that was already equipped with an Aircraft Interface Device (AID) from navAero.
INTRODUCING AIR FRANCE-KLM
Air France-KLM Group in 2016 carried more than 93 million passengers as well as some one million tons of freight to 328 destinations in 118 countries around the world. To deliver this service, Air France-KLM operates more than 530 aircraft and employs more than 82,000 people. The engineering side of the business maintains more than 2,000 aircraft for Air France-KLM and over 200 other customers.
In 2016, the six brands in Air France-KLM Group generated more than €24billion in revenues shared between the passenger network business (84%), the maintenance business (8%) and cargo business (8%). The group is number one in terms of international traffic departing from Europe based on two main European Hubs, Paris-Charles de Gaulle and Amsterdam-Schiphol.
AIR FRANCE AND SITAONAIR JOINT APPROACH
In 2013, Air France was installing navAero electronic flight bags (EFBs) on Airbus A320, A330 and A340 fleets – approximately 160 aircraft. While looking at the EFB and its wireless capability, a new question emerged: ‘Why not gather Quick Access Recorder (QAR) data wirelessly, instead of using optical discs?’
The objective was to find a software solution that would leverage the installed navAero, thereby avoiding Air France having to purchase and install additional aircraft interface devices, AID hardware, and enable the airline to automate the QAR process. Air France approached SITAONAIR to provide DataCapture™ software, portable on various AID platforms and unique to the market. The timelines included a trial project run from 2014 to 2016, with the full solution deployed through 2017 with the aim of completing deployment before the end of the year.
Challenges and solutions
There were a number of challenges to be addressed which led to the devising and realization of a number of solutions (figure 1). 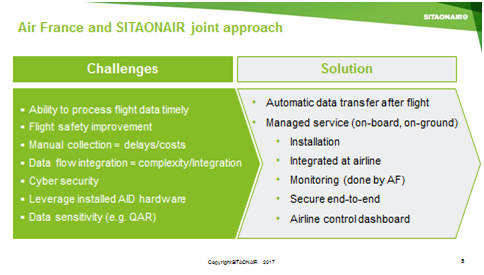 Figure 1
The first challenge was achieving the ability to process flight data in a timely manner, by enabling the automatic transfer of data after each flight. Another challenge was flight safety improvement, which could be achieved by quicker flight safety event analysis. The manual collection of data could be replaced with automatic data transfer, while data flow integration, complexity and cyber security could be addressed by integration into the Air France IT infrastructure with end-to-end securitization. To leverage installed AID hardware would minimize the cost of the solution and, finally, data sensitivity could be addressed by controlling who had access to the data.
e-AIRCRAFT® DATACAPTURE SYNOPSIS
What it is
Figure 2 illustrates the key functions of the solution that was retrofitted to 120 A320 family aircraft. 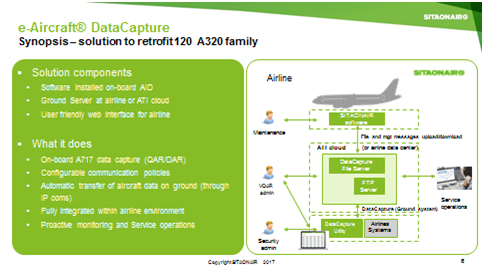 Figure 2
The SITAONAIR core software used is AIRCOMConnect™, which can be ported on the AID. In the case of Air France this AID was navAero, but this can be done on any system that does the same job. There is also a ground server hosted in SITAONAIR’s Cloud, the management component of the solution. SITAONAIR then provides to the airline a user interface to manage the solution. The complete service solution is managed by SITAONAIR – it’s not just the software onboard and on the ground.
How it works
While the software can do many things such as connect on-board applications, Air France’s primary focus has been capturing QAR data. It has been set up to capture ARINC 717 data on board the aircraft, and, with the software, Air France has been enabled to configure the communication policy. For instance, a user may or may not decide if they want to download QAR data at a given airport, simply because there will be different cost implications between airports. Traditionally, the QAR data is downloaded at headquarters, but this solution enables the user airline to implement flexibility between variable scenarios, to download the QAR data. The solution automatically transfers the QAR data from the aircraft to the ground and is made available to the user airline with a user interface for distribution to a flight data management analysis system, such as Safran’s Analysis Ground Station, AirFASE from Teledyne, or the airline’s own.
Figure 2 also shows, on the right, roles and responsibilities in the set-up of the solution. Taking the different roles there are to make it work:
Air France is the early adopter of the solution, which is a little bit different from the generic e-Aircraft® DataCapture product. This is because the ground software has not been installed to the SITAONAIR Cloud, but to Air France’s data center. However, there is a generic version of the solution which is provided through a Cloud-based solution.
BENEFITS OF THE SOLUTION
Reduced costs
The first and an always-important benefit of the e-Aircraft® DataCapture solution is reduced cost. There is no need to install specific hardware for the QAR because it uses an off the shelf AID that is already installed. Telecommunication costs are managed by requesting data on demand in cases where the airline is using Roaming outside France. In France, the transfer is automatic, but in Europe, for example, it is on demand. Costs are also saved by reducing the need for manpower for manual retrieval using optical discs.
When the aircraft lands, as soon as certain conditions have been met, the download is automatic with the option for the user to ‘tell’ the tool if they have not received the data, and press a button to instantly download data for use wherever the airline needs it, such as for post-flight analytics.
Reduced complexity
Complexity is reduced through full end-to-end management across multiple fleets and by using SITAONAIR’s Cloud-based solution, where this host IT infrastructure is required.
Raised reliability and efficiency
Reliability and efficiency are supported with fully secure air-to-ground communication, by managing the data distribution by the airline and by removing the delays for event data gathering and flight safety analysis.
Improved time to market
Time to market is supported with the fully integrated solution and by providing any type of ARINC 429 and wireless connection, and other on board applications.
SITAONAIR, the vendor chosen by Air France, includes data capture as part of their portfolio and has a strong provenance in this field, having been the first developer and vendor to embrace nose-to-tail connected solutions with a portfolio that embraces a number of areas relevant to airline digitalization as can be seen from figure 3. 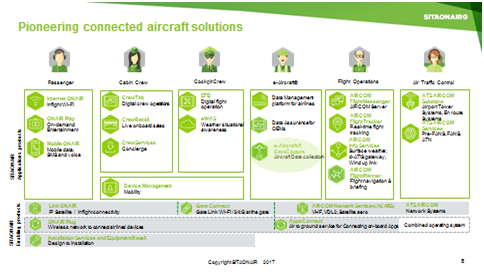 Figure 3
As can also be seen from figure 3, connected solutions serve everyone from the passenger through the flight and cabin crews, to maintenance engineers and flight operations, right over to Air Traffic Control. The Air France solution that is the subject of this case study falls into the e-Aircraft area. SITAONAIR also provides the enablers for the solution (connectivity, the Cloud, integration…) which are absolutely relevant for whatever system is installed on board an aircraft to ensure that the investment can be leveraged. Also, because airlines have multiple aircraft types in their fleets, it’s important to enable digitalization across their fleets. For e-Aircraft® DataCapture, SITAONAIR leverages the airline’s pre-existing environment (in the case of Air France, navAero) and ports the software with no need for additional investment, but leveraging additional value from their investment in the EFB and Flight Operations Quality Assurance (FOQA) programs.
VALUE OF THE JOINT COLLABORATION
Working together with SITAONAIR, Air France was able to realize a number of values (figure 4), including getting one solution that worked across the multi-fleet environment and was able to leverage existing hardware while introducing automation and integration of data.

Figure 4
Cost management is of great value, especially for network connections, as is security and reliability end-to-end with File Transfer Protocol Secure (FTPS) protocols, and simplification because the process is simple with fewer contributors to the process.
From the SITAONAIR side, the collaboration with Air France was fruitful inasmuch as it was able to embark on a project with a large airline and long-serving airline customer, and, from that, build a solution applicable for the whole airline community – its 2017-launched e-Aircraft® DataCapture solution. What was done for Air France has advanced from a project to a product; a community solution. So, any fleet environment has the potential to become an e-environment. This is no longer restricted to the Boeing 787 or the Airbus A350. It is now possible to e-enable a mixed fleet made up of different generations of aircraft. The solution is managed as a service – most of the time when we hear about solutions, we hear about systems. Systems will become increasingly necessary in new generation aircraft; airlines will depend more on the EFB, so there are advantages to managing it as a service that can be reviewed and repaired by a larger solution provider if it fails. Again, the solution is multi-fleet because airlines are usually multi-fleet, and, finally, multi-platform. SITAONAIR’s collaboration with Air France was enjoyable for the vendor with Air France being very open in exchanges about the features and the functionalities. SITAONAIR believes that having worked with Air France is a good starting point from which to work with any airline.
CONCLUSION
We often talk and read about the opportunity that the connected aircraft can bring in opening new territory, but it has to remain open. Unlocking connected aircraft value means creating an environment where the airline has the choice and independence to select the application and justify the business case for the connected aircraft. SITAONAIR’s e-Aircraft® DataCapture is now a reality based on simplicity, trust and collaboration:
That has been the Air France experience of automating QAR/vQAR data collection without having to purchase any new equipment.
Contributor’s Details
Jérôme Hortier 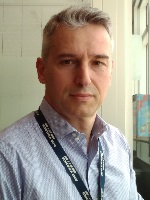 Jérôme Hortier graduated in computer science and has been working for Air France for nine years, starting at the telecom and networks department, he helped to elaborate the ground network infrastructure for the A380 Gatelink. In 2014, he joined the technical department of Flight Operations and has recently joined the service in charge of projects linked to aircraft modification (Aircraft Standard Board) and in this context, the deployment of the V/QAR project.
Pierre-Yves Benain

Pierre-Yves holds a master degree in Telecommunications and IT engineering and an MBA. He accumulated over 20 years international experience in air transport IT and Communications in various management positions. He currently applies his experience for the development of aircraft data management solution to enhance SITAONAIR’s nose-to-tail portfolio proposition. In addition to his work Pierre-Yves teaches corporate strategy at International University in Geneva, is passionate about aviation and holds a private pilot license.

Air France
Air France is the French flag carrier, a subsidiary of the Air France–KLM Group and a founding member of the SkyTeam global airline alliance. The airline’s global hub is at Charles de Gaulle Airport with Orly Airport. Air France operates a mixed fleet of Airbus and Boeing wide body jets on long-haul routes, and uses Airbus A320 family aircraft on short-haul routes.

SITAONAIR
SITAONAIR is the air travel industry’s trusted connected aircraft service expert. With its unrivalled industry-backed heritage, SITAONAIR empowers 400+ airlines and 16,000+ aircraft to navigate the complexity of connectivity and unlock connected aircraft value. We work in partnership with the air travel community, helping support its digital transformation, to unlock the true value of data, grow ancillary revenues, and enhance the passenger experience, operational efficiency and airline safety. Our co-created solutions for passengers, cockpit and cabin crew, and aircraft data management, equip the industry to address the challenges and value-generating opportunities it presents.
SITAONAIR is a subsidiary of The SITA Group, which is airline-owned and airline focused. Find out more by visiting www.sitaonair.aero