What priority do operators give to fuel efficiency initiatives and what motivates their position?

In the last issue we invited readers to participate in the Aircraft IT 2013 Fuel Efficiency Survey sponsored by ETS Aviation. 150 airlines and operators responded to create a valuable overview of how the industry deals with its largest operating expense. So first of all, thanks to all those who took the time to share their experience with us and who have added significantly to the industry’s knowledge on this very important topic.

CONGRATULATIONS!
All those who participated in the survey were entered into a draw to win an iPad and the winner of that very topical prize was Shawn Blair, Manager Fuel at UPS. Well done Shawn and we wish you many happy hours with your new device.

Now to the heart of the matter… what were the results of the survey and what could be read into those results?

The Fuel Efficiency Survey conducted in July 2013 revealed some surprising results. For more than 50% of operators, running a fuel-efficiency programme at all was either a completely new departure or had only been embarked upon in the last three years. We had expected all operators to have a programme of some kind in place, in view of the fact that fuel has accounted for such a major part of everyone’s costs for so long (although even we were astonished to learn that a third of those who participated in the survey spend over 40% of their total costs on fuel).

When asked what they thought were the major barriers to implementing a fuel-efficiency programme, the leading culprit wasn’t cost, as one might have expected, but issues about ‘gathering and processing’ data. This didn’t surprise us. More surprising was that in second place came ‘lack of priority by senior management’ – a response that appeared to contradict a statement further on in the survey where respondents told us that fuel-efficiency ranked second only to safety in their company’s priorities. Maybe the real issue is that senior management needs a better understanding of the data they already have in order to convince them of its potential to unlock some significant cost efficiencies.

This view is reinforced by the 65% of the companies who told us they have access to data sources that would enable them to implement a dedicated fuel- efficiency management tool, while 40% are taking management decisions based on what they themselves describe as ‘unreliable’ data. This might be due to the fact that 49% rely on in-house software or Excel based systems. Whatever the reason, 40% are not satisfied with the results.

We listed eleven operational areas to illustrate where fuel-efficiency gains might be made. As expected, in terms of importance, our operators told us the top four in their experience were all ground-based. Which leaves us thinking: they might be very pleasantly surprised at the hundreds of possibilities that dedicated fuel-efficiency software can open up. To find them, all that is needed is the data – and the management in support.

These were the ‘stand-out’ results from the survey.

The answers to the individual questions were…

We asked respondents what is their fuel spend as a percentage of their total operating costs? By far the largest group at 30% reported that fuel represents between 31 and 40 per cent of their total costs but some 19% find fuel accounts for 40-50% of those costs while 14% actually have fuel costs eating up more than 50% of total costs. At the other end of the scale, 11% have fuel costs accounting for 10% or less of their total costs. Of course, all sorts of factors will be at play here but it does suggest that, for many airlines and operators, fuel spend is a cost area where significant savings could be realized. 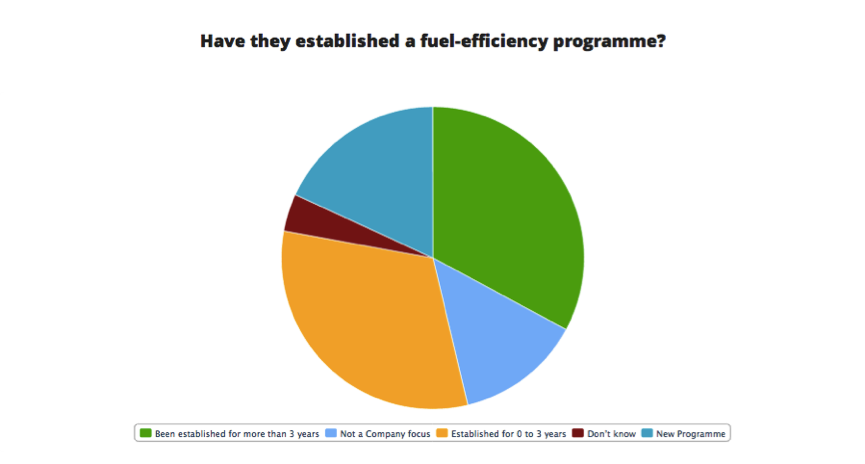 We also asked respondents to tell us how mature is their Company’s fuel saving program? Roughly equal numbers of those who had a program had been running it for less than or more than three years and together they accounted for about two thirds of the respondents. More than one sixth were working on new programs while just under a sixth reported that fuel efficiency programs were not a company focus: again, various factors might be at play here but that last number does, at first sight, seem worrying. 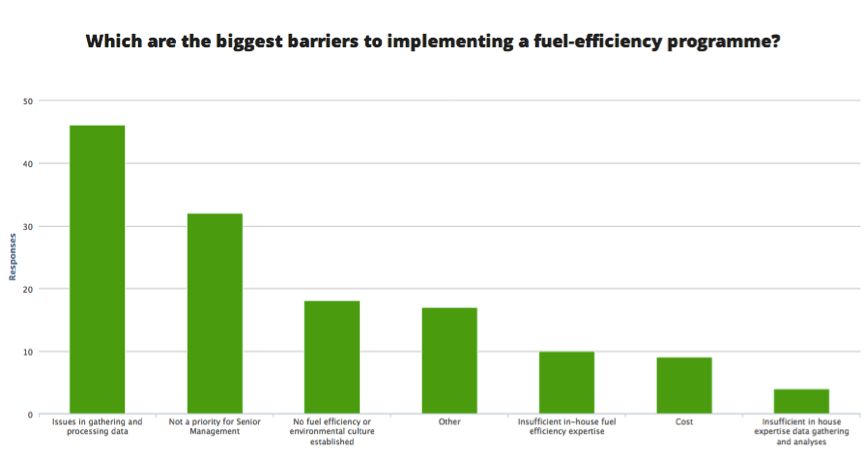 Where a company has a fuel saving program of any sort, we asked how the results were reported and, if the company did not operate a program, what major barriers prevented them from implementing one. By far the largest group at 46 respondents (34%) reported that issues in gathering and processing data were the main barrier while 32 respondents (13%) said that it not being a priority for senior management was the main barrier in their businesses and another 17 (12.5%) told us that the main barrier for them was that there was no fuel efficiency or environmental culture established in the business. Given the critical nature of both issues, we found this quite a surprising response as also was the 10 respondent businesses (7%) who cited insufficient in-house fuel efficiency expertise. The very small numbers who cited either insufficient data gathering and analysis expertise or cost might well be attributable to other factors. 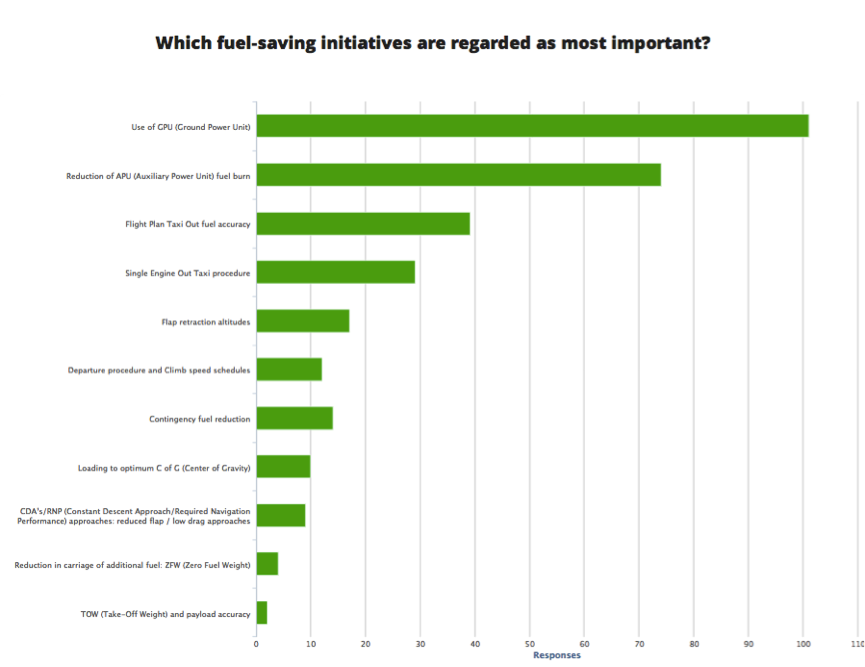 One interesting response was when respondents indicated the fuel saving initiatives currently being actioned within their Company and which of those was regarded as the most important in terms of percentage savings. Interestingly, solutions that can be implemented before the aircraft leaves the ground (use of ground power unit and reduction of auxiliary power unit fuel burn) came out way ahead of the others while the quite complex calculation of take-off weight and payload accuracy came out as least important in the estimation of respondents. This seems to suggest a perceived difficulty in a software based approach. 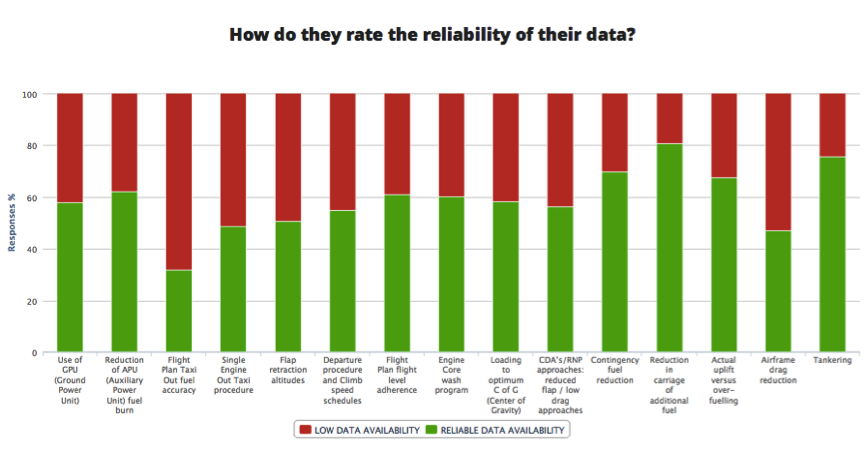 With regard to the same operational areas, we asked how effective respondents’ companies were at tracking efficiency, asking them to indicate how reliable they regard the data that is available to them. It seems that the most information is available around the areas of fuel management – reduction in carriage of additional fuel; tankering; contingency fuel reduction and actual uplift versus over-fuelling. At the other end of the scale, very few respondents felt they have useful information about flight plan taxi out fuel accuracy and not many more feel well served with data on airframe drag reduction.

When we asked whether respondents were satisfied with the overall results that they’re receiving from their fuel saving program, only just over half reported themselves satisfied while nearly half are not satisfied with those results. It seems there might be some way to go in meeting expectations. 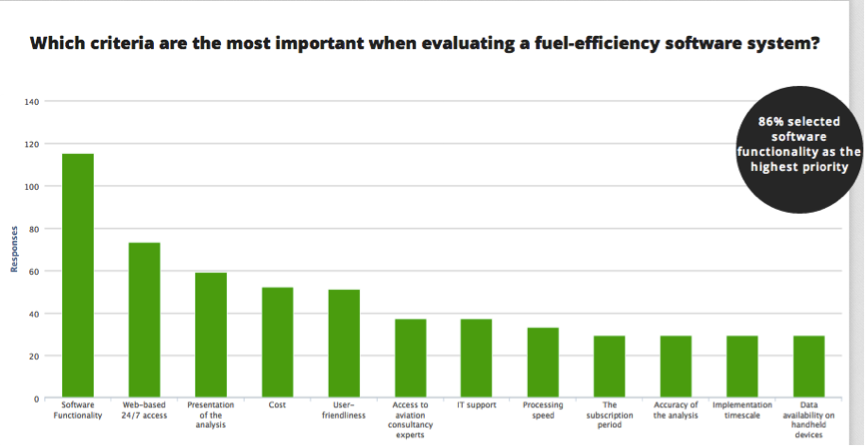 When we asked respondents, if they were choosing a fuel efficiency software solution now, what would be their key selection criteria to choosing a fuel saving management tool, a pretty convincing 86% selected software functionality as the highest priority while a puzzlingly low number rated accuracy of the analysis as an important priority. It was also interesting how few people regard data availability on handheld devices as being important although web-based 24/7 access was rated second most important priority.

It seems, judging from how they approach it, that senior management do not have a very high appreciation of the value in fuel management programs with an outlook that can best be described as inconsistent. As we said at the outset, nearly all respondents placed fuel efficiency as second only to safety in their organisations’ priorities and yet lack of senior management support was identified as a major barrier to the implementation of a fuel efficiency program.

This is not a subject that will go away and is likely to become ever more important to regulatory authorities and to bodies charged with global environmental concerns… which means that, like it or not, it will also become ever more important to airlines and operators. At the same time, with the economic downturn and the likelihood that fuel prices will not be going down, companies are looking into managing their businesses more effectively. In the long term, new aircraft will be more efficient, but you cannot replace a fleet overnight. You can implement a fuel efficiency program, if not overnight then certainly within a couple of months and at considerably less cost than the purchase price of a new aircraft. And even new aircraft, with increasingly higher levels of fuel efficiency can be ’operated’ at less than their potential efficiency so will still need to be accurately tracked.

We’d like to thank ETS Aviation for their considerable support in sponsoring this survey and those readers who took the time to respond. The full survey results can be found at http://www.aircraftit.com/Operations/Questionnaire.aspx